As the Florida legislature convened this week, House Speaker Will Weatherford helped rally fellow Republicans opposed to expanding the state’s Medicaid coverage to more than a million low-income residents, but he also acknowledged that his own family benefitted from a program for low-income families without health insurance. 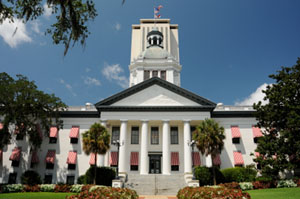 The dispute over the Medicaid expansion sanctioned by the federal health law has engulfed the state Republican Party, which controls the House, Senate and governor’s office, and left the fate of expansion in doubt.

In voicing his opposition to the move, Weatherford Tuesday told a personal story of how, when he was 15, his 13-month-old brother Peter was dying of cancer.

“I don’t know the specifics of what happened. I know my brother had cancer, I know we were uninsured and I know we weren’t able to pay the bills,” he said.

Weatherford said the family relied on safety-net and charity services, like the Ronald McDonald House, where they stayed during trips to the hospital. The speaker neglected to say what other “safety net” services the family received.

The Tampa Bay Times/Miami Herald contacted Weatherford’s father. Bill Weatherford told the reporters that the family applied for and received Medicaid, a federal-state health care program for low-income people, to cover some $100,000 worth of bills. When asked about his father’s comments, the speaker said his father was mistaken and later issued a statement saying the family received support from the medically needy program. That program used Medicaid funds to help cover high health care expenses for people with low incomes but who would not otherwise qualify for Medicaid.

“As I stated yesterday, I believe in the safety net,” Weatherford said in the statement. “My family benefitted from the safety net. Children living in poverty today are offered coverage under Medicaid or Kidcare in Florida. Expanding Medicaid will not extend coverage to a single low-income child under 18 in Florida because they are already covered, just like Peter was.”

Gov. Rick Scott, who is an ardent opponent of the federal health law, surprised many in his party when he announced a week ago that he would support the Medicaid expansion. Under the health law, the federal government picks up the entire tab for the expansion for the first three years but the support would fall to 90 percent in later years.

When the U.S. Supreme Court upheld the Affordable Care Act last summer, it also ruled that states could not be forced to expand Medicaid. Scott became the seventh Republican governor to announce his support of the expansion.

Opponents say expanding Medicaid doesn’t guarantee better health outcomes or access to doctors. But if Florida chooses to reject the Medicaid money, the program’s advocates counter, it would be footing the bill for other states, and low-income Floridians would still be left uninsured.

Monday a House panel voted to draft language rejecting the funding. Representatives say they’re concerned about additional costs to the state, and question whether Medicaid is the solution for providing people access to doctors.

In opening the House session, Weatherford said, “I’m opposed to Medicaid expansion because I believe it crosses the line of the proper role of government. I believe it forces Florida to expand a broken system that we’ve been battling Washington to fix. And I believe it will ultimately drive up the cost of healthcare in Florida.”

Senate President Don Gaetz cast even more doubt on the possibility of an expansion after the House panel vote when he said if the House rejects the plan, it would kill any future negotiations.

“It takes three yeses to get to ‘yes’ and one ‘no’ to get to ‘no,’ and it sounds to me from what I heard today stated in the Florida House, that the House of Representatives and the speaker are inclining toward no. And if that’s the case, then no one gets to bat, the lights get turned off and we all go home on that issue,” Gaetz said.

The Senate committee studying the issue has yet to come out with its stance on the expansion. But committee chairman Joe Negron, who crafted Florida’s statewide Medicaid Managed Care System, has said the state can’t just say no without having a solution to serve Florida’s 4 million uninsured. The managed care plan won approval from the federal government on the same day that the governor said he would support expansion.

Negron hopes to continue negotiations on the issue.

“The concerns about Medicaid expansion are very real and very legitimate,” he says. “But I don’t find persuasive the idea that we just can’t. We just have to have people go to the Emergency Room when their 11-year-old kid has an ear ache at 2 am. That that’s the best we can do. We can do better than that.”

But some analysts suggested if the Senate were to move forward with the expansion, it could put some pressure on House Republicans to reconsider.

“I think if the Senate comes out on the opposite side here, you’re going to see back room negotiations and ideas and issues trying to persuade the other House to come over to the position,” said Florida State University political science professor Carol Weissert.

Some lawmakers also are now looking to a plan initiated by Arkansas, which got federal approval to give billions in federal Medicaid money to people who would qualify under the health law to buy private coverage on an exchange.

Meanwhile, in his State of the State Speech Tuesday, Scott reiterated his support of increasing access to Medicaid.

“I cannot, in good conscience, deny the uninsured access to care,” Scott said to cheers from Democrats, and mostly silence from Republicans.