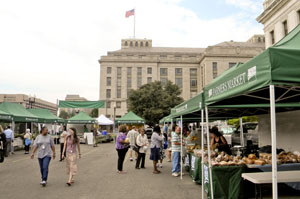 Customers shop at the USDA farmers market outside the agency’s headquarters in Washington, D.C. (Photo by Madhu Rajaraman/News21)

Like farmers’ markets across America, this one sponsored by the USDA is thriving, propelled by a national craving for fresh food and the perception that locally grown food is healthier than food mass-produced by big agriculture and sold in grocery stores.

But commercial tests found pathogens on raw chickens sold by a Virginia farmer at the USDA market that could be harmful if the poultry were not properly cooked, according to an investigation by News21, a national university reporting project at the University of Maryland. The same was true of poultry sold by a Pennsylvania farmer at a Vermont Avenue market nearby.

Both farmers were exempt from USDA inspections because they process fewer than 20,000 chickens a year, although farmers operating under the exemption are not permitted by USDA regulations to sell their products across state lines, officials said.

A USDA spokesman said the department has suspended poultry sales by the vendor at its market as it conducts an investigation.

The director of FreshFarm Markets, the nonprofit organization that operates the market on Vermont Avenue, said that FreshFarm requires USDA inspection of all meat being sold at the market. Ann Yonkers, the director, said she was unaware that the farmer’s chickens were exempt from inspection and asked him to stop selling them.

The findings from both markets highlight seams in the federal government’s efforts to keep the country’s food supply safe through a maze of federal, state and local laws that can be confusing even for the people charged with enforcing them. They also illustrate the danger for consumers who think they can find refuge in markets selling food grown locally.

Despite the interest in food from local growers, scientists say small does not mean safe. “From a food safety point of view, there’s no inherent reason why large production is, on balance, more dangerous than a small family farm,” said Bill Keene, senior epidemiologist at the Oregon Public Health Division.

Benjamin Chapman, a food safety specialist at North Carolina State University, said in some cases small farms may be less safe. “We’re finding that there’s less pressure on a vendor at a [farmers’] market to implement risk reduction because the perception is that the product is safe already,” he said. “At a grocery store, growers have all these specifications they have to hit, but that’s absent in the farmers’ market.”

Tests conducted for News21 by the Baltimore division of Microbac, a federally certified laboratory with locations nationwide, found salmonella in three samples of chicken being sold at the USDA market by J&L Green, a farm in Edinburg, Va.

“Our process as a whole is sanitary when operated correctly,” said Jordan Green, one of the farm’s owners. “Mistakes do happen.”

Green did say that he had recently noticed problems with his plastic bags of fresh chicken leaking at the farmers’ market. He said it was hard to keep bags from tearing and that he was moving away from fresh and toward frozen poultry as a result.

Leaky poultry juices present a particular cross-contamination hazard at a farmers’ market, where shoppers may also be buying peaches or lettuce and placing their purchases in the same canvas bag. Since produce is often eaten uncooked, any pathogens would not be killed.

At the market on Vermont Avenue, Microbac found campylobacter on chicken sold by Garden Path Farms, from Newburg, Pa. Emanuel Kauffman, the farm’s owner, said he believes his farming practices are safer than big agriculture’s.

It is not against the law to sell raw chicken with salmonella or campylobacter. Regulators instead have placed the responsibility on consumers to understand the importance of cooking thoroughly and avoiding cross-contamination of other foods on the way from market to oven. A USDA official said the department’s consumer education efforts are vigorous and ongoing.

But the government’s efforts have failed to reduce the number of salmonella infections in 15 years, even as other food-borne illnesses have dropped.

Salmonella, which doesn’t discriminate between small and large farms, is a pathogen sometimes found in the intestinal tracts of birds and other animals. On chicken farms, it can spread from bird to bird or can be introduced by wild animals. And during slaughter and processing, salmonella on one chicken can contaminate many more.

Salmonella is invisible, odorless and tasteless, so even the most careful farmers might not know their chicken carries the bug unless they test for it themselves.

The same goes for campylobacter, another pathogen that is even more prevalent in chickens. It is one of the leading bacterial causes of diarrheal illness in the United States, according to the Centers for Disease Control and Prevention.

Microbac also found salmonella or campylobacter in chicken parts sold by another local vendor and two grocery store chains a short distance from the U.S. Capitol.

The findings demonstrate how relatively easy it is to find pathogens—no matter which market or grocery store you patronize.

In 2009, an annual FDA retail meat study found 21 percent of chicken breasts contaminated with salmonella, and 44 percent with campylobacter.

The findings come at a time of increased federal concern over food-borne infections linked to the two pathogens, which the Centers for Disease Control and Prevention says are two of the most commonly reported causes of food-borne illness.

A 2011 CDC study estimated 1.8 million people are sickened, 27,000 are hospitalized and 400 die each year from both pathogens combined.

Because J&L Green, the Virginia farm selling chickens at the USDA market, operates under the exemption for small farms, no government inspector had ever looked at the way Jordan Green and his wife, Laura, raise and slaughter chickens, he said. The USDA agency generally reviews exempt operations only if it receives a complaint.

Farmers are the ones who decide whether they want to operate under an exemption from inspections. They do not, however, have to notify the USDA that they have claimed the exemption, so the agency does not keep track of them.

State governments may have their own rules. Virginia, for example, requires farmers to fill out a two-page application form — which Jordan Green said he didn’t know about but has now submitted. He also has paid for his own salmonella tests.

When the USDA’s Agricultural Marketing Service accepted J&L Green into its farmers’ market this year, officials failed to catch that he was not registered for the Virginia exemption he claimed and that he was breaking federal and state requirements by transporting exempted poultry across state lines for sale.

The farmers’ market manager, Velma Lakins, said that she was aware that J&L Green Farm labeled its chicken as exempt. She thought exempted chicken could be transported across state lines, as did two regional USDA officials interviewed by News21.

Also at the USDA market, C&T Produce of Fredericksburg, Va., another vendor, was observed selling unrefrigerated eggs, even though egg cartons bore USDA-mandated labels stating they should be refrigerated.

Lakins, the market manager, said in an interview that she saw the eggs in coolers with ice packs. But Craig DeBernard — who co-owns C&T with his wife, Tracy — said he hadn’t known the eggs had to be refrigerated and did not do so. C&T has stopped selling eggs at farmers’ markets during hot summer months and will sell them in an iced cooler in the fall.

News21, a university journalism program, is part of the Carnegie-Knight Initiative on the Future of Journalism Education.