The 5-mile hikes, yoga classes and communal dinners are now routines for the residents at PDX Commons Cohousing in Portland, Ore.

These 39 individuals (about half partnered but largely strangers at first) started forging relationships well before they moved in late this summer to join a trend called cohousing.

“Here, you walk in and know every one of the people and you know them well,” said Steve Fisher, 63, a retired transportation planner who leads the weekly hikes. He and his wife moved from San Jose, Calif., to PDX Commons. “You greet them. They’re your friends. You do stuff with them. It’s the opposite of the isolation you sometimes get in the urban areas.”

It’s not a commune and there’s no sharing of income, though decision-making is by consensus. Cohousing bolsters sharing — a lawnmower, tools or an on-site laundromat, as well as guest quarters for out-of-town visitors. Homes are private, clustered near a common space where homeowners meet regularly to share meals and build community.

Of the nation’s 168 cohousing communities, almost all are intergenerational. But now, as increasing numbers of aging adults eschew the idea of institutional living, cohousing has become an attractive option.

In 2010, no U.S. cohousing communities were geared toward seniors. PDX Commons is now the nation’s 13th such community for the 55-and-older demographic. Two more are under construction and 13 others are in the early stages.

“Interest in cohousing has not only increased in general, but especially in the senior world,” said Karin Hoskin, executive director of Coho/US, the Cohousing Association of the United States,a nonprofit that supports cohousing communities nationwide.

While groups of friends may discuss growing old together on common ground, in most cohousing communities, the residents start as strangers who plan to help each other for the rest of their lives. Fisher said part of the home-buying process includes months of getting-to-know-you activities that precede the purchase.

“We are people who have the ability to live independently who intended to come together to form a community,” Fisher said of the group that ranges in age from 57 to 80. “We made it really clear: We’re not a care facility.” 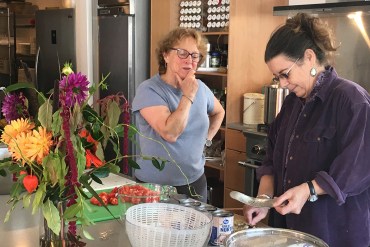 Trudy Hussman (left) talks with Stacey Roberts. Hussman lived alone after her 2016 retirement until she moved to PDX Commons, a cohousing community aimed at people older than 55. (Courtesy of Lew Bowers)

Trudy Hussman, 68, bought into PDX Commons in June 2016 after retiring two years ago.

“I had been living alone for a long time and was feeling fairly isolated since I retired. I was used to it but not happy with it,” she said. “I started thinking that living in a community with other similar people would be an antidote.”

Clinical psychologist Elizabeth Lombardo, of Chicago, agrees. Social support is critical to health and well-being, with countless studies showing those with social ties live longer, are physically healthier and happier and have less stress, she said.

“From a psychological and physical health perspective, it’s a pretty cool idea,” Lombardo said of cohousing. “It depends upon how open-minded and like-minded people are.”

Sidney Ewing, 82, and his wife of 54 years, Margaret Ewing, 77, had second thoughts about moving to the cohousing Oakcreek Community in Stillwater, Okla. The couple, both retired professors from Oklahoma State University, were among the group’s founders but dropped out.

“We decided the social load might be too heavy for us,” he said. “We are much more introverts.”

Two events changed their thinking. A neighbor fell down the stairs at home and was on the floor eight hours before being found. And, they got a notice from Oakcreek of an approaching deadline. They rejoined in time to get in on the planning and moved in five years ago when the community opened. 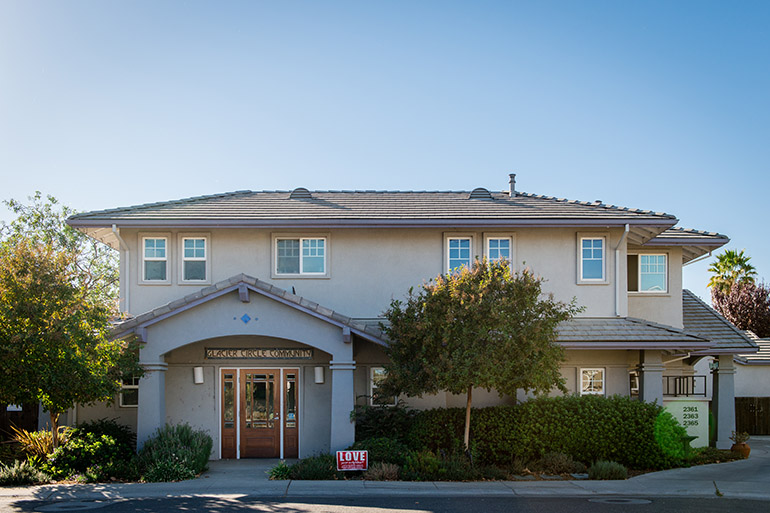 The nation’s first senior cohousing community opened in December 2005 with eight homes and a dozen individuals at Glacier Circle in Davis, Calif., about 15 miles from Sacramento. Seven of the initial group remain. (Heidi de Marco/KHN)

Cohousing came to the U.S. after architects Charles Durrett, 62, and his wife, Kathryn McCamant, 57, learned about the concept in Denmark. The Nevada City, Calif., couple became advocates and have designed more than 55 such projects in the USA and consulted on others. Cohousing fulfills a variety of needs, from saving money through sharing to having ready companions. Cohousing developments include private homes (typically 20-40 such homes, with square footage reflecting a downsized lifestyle) clustered around shared space designed to promote frequent interaction. The legal entity is usually a condo or homeowners association with monthly fees, generally between $100-$350, Durrett said.

“Structurally, they’re infinitely different,” he said. “It needs to be designed from scratch for each group.”

At some senior projects, one of the guest rooms in the common house was designed for future caregivers to assist homeowners; however, the cohousing communities say they haven’t been used that way because anyone who might have needed such help hired someone privately. Cohousing communities don’t aim to be continuing-care or nursing facilities, homeowners say. 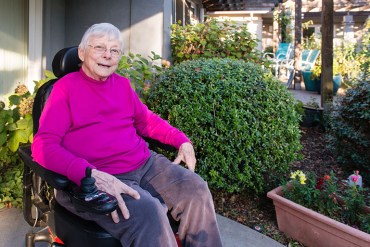 Sue Saum, 86, sits on her patio at Glacier Circle last month. Saum is one of the original group members there. (Heidi de Marco/KHN)

The nation’s first senior cohousing community opened in December 2005 with eight homes and a dozen individuals at Glacier Circle in Davis, Calif., about 15 miles from Sacramento. Seven of the initial group remain.

“We’re declining and holding on and trying to be good to each other,” said Stan Dawson, 86, president of its homeowners association. “There’s no sense that anyone wants to move out to a nursing home yet, unless they absolutely have to.”

Dawson said the community connected as members of the Unitarian Universalist Church in Davis but didn’t really know each other. 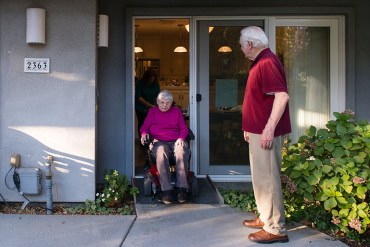 Stan Dawson checks on neighbor Saum. “There’s no sense that anyone wants to move out to a nursing home yet, unless they absolutely have to,” Dawson says. (Heidi de Marco/KHN)

Their thrice-weekly communal dinner has expanded to Monday-Friday most weeks. From the beginning, they hired a cook, but now that the members are aging, Dawson said they’re also hiring out other needs.

Among the newer senior projects is Village Hearth Cohousing in Durham, N.C., where construction is to begin in April and move-in is scheduled for the summer of 2019. It’s an “LGBT and allies” community for age 55-plus, said Pat McAulay, 62.

“My wife and I actually started the group in 2015,” she said, based upon “dozens of beach trips with our friends — a bunch of women together in a house. We said ‘Let’s do this when we retire.’”

But none of those friends bought in, so they started looking for prospects in April 2015 and bought 15 acres in August of that year. So far, 11 households are sold. 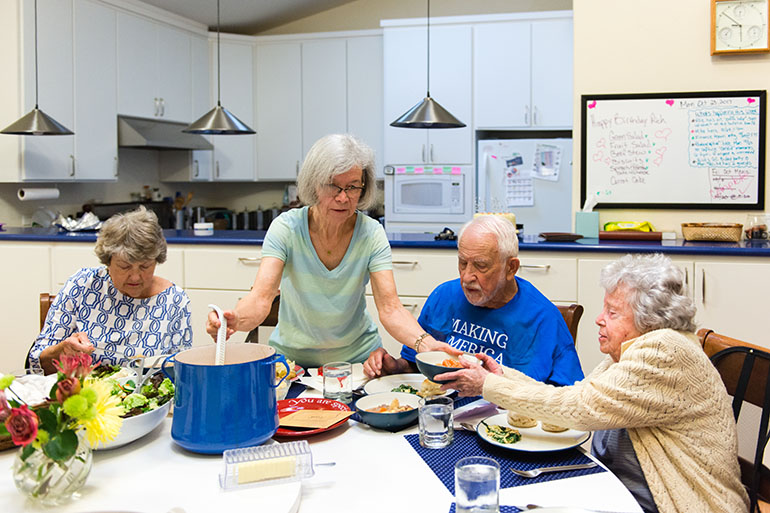 Alan O’Hashi, 64, who moved to senior cohousing at Silver Sage Village in Boulder, Colo., in 2010, offers newbies some advice.

Lew Bowers, 65, said PDX Commons is learning that. “In consensus,” he said, “you have to think about what’s good for the group.”

For Active Seniors, Cohousing Offers A Cozier Alternative To Downsizing