Saturday is National Gay Men’s HIV/AIDS Awareness Day, but the news about knowledge and treatment of HIV in the gay community is dispiriting. 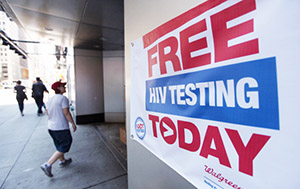 Just 30 percent of gay and bisexual men say they were tested for HIV within the last year as recommended; another 30 percent say they have never been tested.

And even when they are tested, only half of those who have been diagnosed with HIV are receiving care and treatment for their infection.

“It’s unacceptable that treatment, one of our most powerful tools for protecting people’s health and preventing new HIV infections, is reaching only a fraction of gay men who need it,” said Jonathan Mermin, M.D., director of CDC’s National Center for HIV/AIDS, Viral Hepatitis, STD, and Tuberculosis Prevention in a statement. “A top prevention priority at CDC is making sure every gay man with HIV knows his status and receives ongoing medical care – otherwise, we will never tackle the HIV epidemic in the country.”

At least part of the problem may be a lack of education about the disease.

Fewer than half of gay and bisexual men surveyed in the KFF poll were aware that antiretroviral treatment should begin immediately after an HIV diagnosis, and one quarter knew that treatment can reduce the risk of passing their infections along to a partner. Just 26 percent knew about PrEP, a daily pill for HIV-negative individuals that can lower their risk of becoming infected.

“It is surprising to a lot of us who spend a lot of time thinking of these issues and live in places where they’re talked about a lot,” says Liz Hamel, lead author of the KFF poll. “But this survey is nationwide and doesn’t necessarily reflect what gay men in activist circles in San Francisco are hearing and talking about.”

The results of the survey mean that there’s a tremendous opportunity to increase awareness, Hamel adds. Some of that education could come from physicians. More than half of those polled in the KFF survey report that a doctor has never recommended they get tested for HIV; 61 percent say they rarely or never discuss HIV with their doctor.

“When you look at the growing epidemic among young gay and bi men, I’m not sure the results aren’t all that surprising, but certainly hugely disappointing,” says Michael Kaplan, President & CEO of AIDS United, a Washington D.C.-based advocacy and grant-making group. ”It is amazing at a time when testing and treatment offer so much hope in this epidemic, and when gay and bi men face such high rates, we’ve yet to succeed in more regular screening and educating gay and bi men about treatment.”

The KFF poll found that the gay and bisexual community has also shifted to other priorities besides HIV.  HIV was still listed as the top health priority, but when asked to name the most important issue facing gay and bisexual men today, HIV ranked behind discrimination/lack of acceptance and was on a par with equal rights and marriage equality.

Just 35 percent said they were personally concerned about becoming infected with HIV.

Once diagnosed with an HIV infection, the CDC analysis found that about three-quarters of those were linked to care within three months. But only half retained that care, and fewer than half were prescribed antiretroviral therapy.

Gay and bisexual men make up a just 2 percent of the U.S. population but account for 66 percent of new HIV infections.

The KFF survey was conducted from July 17-August 3 with a sample of 431 men age 18 and over who self-identified as gay or bisexual based on a nationally representative, probability-based online research panel. The margin of sampling error is plus or minus 7 points.

For Gay Men, Gaps In HIV Knowledge And Treatment Persist