When it comes to hospitals, which benefit most from high health care prices? It may sound counter-intuitive, but a group of not-for-profit hospitals appear to be among those doing the best business.

At least, that’s the idea in a study published Monday in Health Affairs. It analyzes how hospitals make money and ranks the nation’s 10 most profitable ones — those making hundreds of millions of dollars through their inpatient and outpatient care. Seven were nonprofits, including the top four.

The findings are based on Medicare cost reports from fiscal year 2013, analyzing almost 3,000 acute-care hospitals. About 60 percent were nonprofit, while one in four were for-profit. The rest were public, or government-owned.

The top three were nonprofits. Gundersen Lutheran Medical Center, part of the large Wisconsin-based health system, made the most money: $302.5 million just on its patients. California-based Sutter Medical Center, also part of a large system, came in second. Stanford Hospital, also in California, was third.

Those hospitals share a key attribute, the authors argued. Whether because of their size, their prestige or their influence in the community, they have more power to negotiate prices, meaning they can charge insurers more for the care they give.

“They are the only provider — or they are clearly the dominant provider — and the insurers in that community are relatively weaker, and there are a lot of them,” said Gerard Anderson, director of the Johns Hopkins University Center for Hospital Finance and Management, and one of the study’s authors. “[The hospitals] can take advantage of their market position. And they do.” 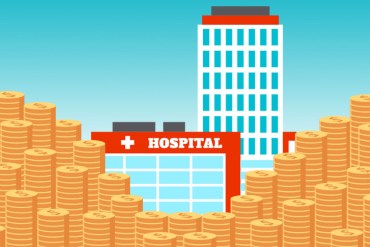 The researchers looked only at profits made from actual medical care, meaning they didn’t factor in the often substantial amount of money hospitals make from sources like investments, grants, donations, parking fees and property rentals. The idea was to focus on what hospitals make from patients alone, said Ge Bai, the study’s primary author. Bai is currently an assistant professor of accounting at Washington and Lee University, though she’s joining the faculty at Johns Hopkins’ Carey Business School in the fall.

Most hospitals — particularly nonprofits — don’t actually earn money from patient care. Rather, a large market share or inclusion in a big health system — like Gundersen — better predicted how well hospitals would do.

“Many of the hospitals best-positioned to earn profits are non-profits — they’re the ones often that have the most prestige, they’re the largest hospitals,” said Paul Ginsburg, the director of the Center for Health Policy at the Brookings Institution and director of public policy at the University of Southern California’s Schaeffer Center for Health Policy and Economics.

Ginsburg, an expert in health economics, wasn’t affiliated with the study.

Market muscle matters in bargaining with insurers. That may be driving the hospital industry trend toward consolidation.

In recent years, many hospitals have merged to form larger health networks. They argue that doing so leads to better service to patients — for instance, care can be coordinated across more locations. In addition, they say they can then better negotiate with insurance companies. The study notes that in markets dominated by insurance companies, hospitals were less likely to profit from patient services.

But mergers have also been shown to increase the cost of health care. That’s because they often give hospitals leverage to set higher prices or charge insurance companies more. Likewise, brand-name hospitals, such as those affiliated with prestigious universities, can exert a similar pressure, Bai said. For instance, she explained, if she were shopping for health insurance in Baltimore she wouldn’t buy a plan that didn’t include Johns Hopkins Hospital.

Increased health care costs, the study authors said, are felt by consumers — either in the form of higher health plan premiums, or, in higher hospital bills for patients who don’t have insurance or who receive care out of network. The latter situation happens more often than people expect, Bai said, especially in emergencies, when people don’t have time to pick who’ll treat them.

The study also adds to the debate about whether the tax status of nonprofit hospitals needs more thorough scrutiny, Ginsburg said. They typically don’t have to pay taxes because, the idea goes, they provide a public service. But the paper’s findings “very clearly raise the issue about … whether these hospitals need or deserve the tax exemption.”

That’s an issue federal policy has tried to address, too. The 2010 health law, for instance, included a provision intended to make nonprofit hospitals prove they deserve their tax-exemption — increasing the standards for the “community benefit” those hospitals are supposed to provide.

Often, the local hospital is the largest economic engine in a community, and not taxing it means the local governments forgo a significant amount of revenue. The benefit a not-for-profit hospital provides hardly differs from that provided by one that’s for-profit, especially when both types of hospitals have rosy financial outlooks, based on the patient care, Ginsburg said.

Meanwhile, Bai said, the findings also support the notion that hospital mergers need to be better regulated. Setting federal limits on what hospitals can charge for a particular service might also help, she added. Maryland and West Virginia have experimented with that idea. Despite outcry from some executives, the study notes, hospitals in those states are still profiting.

Without that kind of oversight, Bai said, consumers will get shortchanged.

For Hospitals, Prestige Leads To Profits