At 61, Ken Helms of Charlotte, North Carolina, would love to have health insurance. Based on what he earned directing traffic this year, he’s eligible for federal help paying premiums and out-of-pocket costs under the Affordable Care Act.

But he worried that his unpredictable income could leave him in the lurch. The subsidies are designed to provide more help to those with smaller paychecks. But in North Carolina, the floor drops out when a wage-earner falls below the poverty level, a distinct possibility for Helms.

His fear: Getting health insurance – and long-delayed care – could leave him worse off if he loses his coverage and has to repay Uncle Sam. 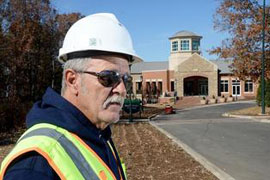 Ken Helms is eligible for federal help paying affording health coverage. But he worried that his unpredictable income could leave him in the lurch (Photo by Diedra Laird/Charlotte Observer)

Experts say that won’t happen, but his trepidation is understandable.

People who rely on tips, commissions or jobs with variable hours can have a tough time predicting annual income, which is the basis for ACA subsidies. In a recent Federal Reserve survey, almost one-third of Americans said their income fluctuates from month to month.

But for those who hover around the poverty line, a slump can put them into the “no help” category in the Carolinas and 21 other states that haven’t expanded Medicaid coverage.

When Congress passed the ACA, the plan was for all states to use federal money to extend Medicaid to the poorest able-bodied adults, with subsidized private insurance covering low- and moderate-income people. But North Carolina and South Carolina joined other Republican-led states in saying “no thanks,” leaving at least 575,000 low-income Carolinians in the coverage gap.

In 2013, Helms was among them. He works for a temp agency, and that year work was sparse. He says he made only about $2,200, so when the time came to sign up for 2014 subsidized policies he qualified for nothing.

This year was much better: He earned about $19,000 directing traffic at UNC Charlotte, where a new dining hall was under construction for most of the year. But that job ended in November.

“Next year I know my money’s going to fall down,” Helms said. But he has no way of knowing how much. If he goes as low as $11,670, he’ll get almost all of his costs covered by federal aid. If he dips below that he’s in the gap.

Madison Hardee, a lawyer with Legal Services of Southern Piedmont who is trained to help with ACA enrollment, says Helms won’t be asked to repay any subsidies if he “honestly and reasonably estimates that his income will be over 100 percent of the poverty line” but falls short.

The Kaiser Family Foundation, which does extensive research into the ACA, agrees: “If you were determined eligible for subsidies when you signed up, and your income turns out to be lower, you will not have to repay the subsidies you received,” it says in a list of frequently asked questions.

The “too poor for subsidies” dilemma highlights a message that can be a tough sell: Reporting all possible income to the IRS can be an advantage to low-income taxpayers.

People struggling to make a living often work jobs doing hair, yard work, auto repairs or child care. They may be paid in cash and fail to report that income, but that’s a mistake, said Scott Curtis, area developer for Liberty Tax Service in Charlotte.

Not only can that extra income keep someone eligible for health insurance subsidies, Curtis said, but at some income levels it can boost the Earned Income Credit, a tax credit for the working poor.

Keith Adams of Common Heart, a nonprofit group that’s certified to help Union County residents with ACA enrollment, says his group tells people the same thing: “Find every scrap of income and pay taxes on it.”

Will N.C. close the gap?

A handful of states that rejected the Medicaid expansion have created their own ways to offer coverage. Arkansas, Iowa and Pennsylvania, for instance, got approval to use the federal expansion money to create their own subsidies for people in the gap to buy private policies.

It’s unclear whether North Carolina will follow suit. State leaders say some type of Medicaid reform will be on the agenda when the General Assembly convenes Jan. 14. Gov. Pat McCrory and departing House Speaker Thom Tillis have indicated interest in finding ways to extend coverage, while Senate President Pro Tem Phil Berger says he hasn’t changed his stance on rejecting the federal money.

If North Carolina does nothing, it will forego almost $40 billion in federal money for Medicaid expansion over the next decade, while saving just over $3 billion in state costs for expansion, according to a recent study by the Robert Wood Johnson Foundation. Meanwhile, state taxpayers will kick in about $10 billion in federal tax hikes designed to pay for the expansion without reaping any benefit.

Any decisions the legislators make in next year’s session would take effect in coming years, too late to alleviate Helms’ fears.

Last week, Helms spent about an hour with Hardee filling out the application for subsidized insurance.

His challenge is a familiar one to people who work with the exchange. “The majority of people have trouble estimating their income,” Hardee said. “Most of the people we see aren’t on a salary.”

Based on his last three years of earnings, they estimated his 2015 income at $12,000. That qualifies him for $671 a month in federal aid. He chose a Coventry silver plan that will cost him just over $95 a month (a nonsmoker could have gotten it cheaper). Because he also gets help with out-of-pocket costs, he’ll have no deductible and pay only $10 for primary care visits and $20 for visits to specialists.

She showed him how to update his income during the year. If it becomes clear he’ll fall below the poverty level he could lose his subsidy. But he wouldn’t be penalized or asked to repay what he’s already gotten, Hardee said.

As long as Helms makes his first payment by the end of this month, his coverage kicks in Jan. 1.

He’s in pretty good health, he says. But at his age, various aches and pains have been worrying him, along with all the screenings he’s skipped.

Soon he’ll be able to put his mind at ease – or get treatment if problems turn up.

“It just means the world to me,” Helms said. “It’s everything I can do to keep tears from running down my face.”