It wasn’t that long ago that money flowed steadily to entrepreneurs who dreamt up whiz-bang medical devices.

Hospitals souped up their surgical suites with robots or high-tech radiation machines for cancer treatment. Cost wasn’t an issue: They just got passed along to insurance companies, who passed them on to employers and patients. 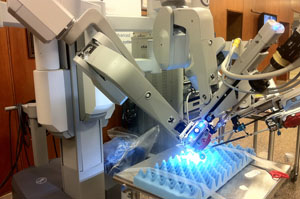 But after the Great Recession hit and the 2010 health law passed, the financiers behind the medical arms race started to rethink their investment calculus.

“If you come in with [a device] that’s 10 percent better and twice as expensive, it’s hard to get anyone to care,” said Bryan Roberts, a Palo Alto, Calif.-based venture capitalist at Venrock, a Silicon Valley company that invests in firms working on health services, medical devices and drugs.

“The changes in the health system are rocket fuel for entrepreneurs,” says Roberts’ partner Bob Kocher. He is a former Obama health policy adviser who was hired by Venrock in part to capitalize on the expertise he cultivated working on the law in the White House.

The share of venture dollars flowing to seed and early-stage investments in biotechnology and medical devices has plummeted since 2007, when investors pumped $3.6 billion into 332 deals in which a price was disclosed, according to data compiled for Kaiser Health News by FactSet Research Systems. Overall venture investing declined by nearly one-third as the economic recession set in.

Kocher is eyeing businesses that do things like help hospitals keep patients from returning to the hospital with complications soon after treatment — a big-ticket cost that the health law will now tie to new penalties. Like other investors, he also anticipates that many people who gain coverage under the law will face high insurance deductibles. So, Venrock and other firms have funded Castlight Health, a technology company that helps patients choose the cheapest care.

The opportunities within complex health care ecosystems are in things as mundane as billing. “There’s a half a person per hospital bed on average that sits in the hospital doing coding and collections and trying to get paid,” Kocher says.

Their solution? Drop the manual coding and create “a software system that learns as it codes and keeps getting better and better. And all of a sudden you can say to the hospital, Look, we’ll charge you 50 or 70 percent of what you’re paying now. You guys save 30 percent. But by the way, we can make great margins and make a terrific business because our costs are so much lower, because we’ve actually used technology rather than just people to attack the problem,” Roberts gushes.

On the treatment side, the investors in Silicon Valley understand that hospitals don’t want space-age solutions for tomorrow as much as they want cheap, pragmatic products that can solve basic problems. When it comes to controlling urinary infections, for instance, the future is indeed in plastics. Plastic catheters.

Vicki Farrar started a company called Catheter Connections, based in Salt Lake City. She’s almost evangelical about building a better catheter – one that kills the microbes that cause infection – and it’s not hard to understand why. The infections are totally preventable and Medicare won’t pay for them.

“It’s directly impacting the hospital’s bottom line, so they don’t want this out-of-pocket cost. It’s about $50,000 per infection rate,” she says. Meaning, the hospital loses $50,000 for every catheter-related blood stream infection. The DualCap catheter she sells, which looks like a spark plug and smells of rubbing alcohol, costs less than a dollar.

DualCap investor Anne Degheest figured the catheter was a good business to bet on, because it prevents hospital readmissions. She points to another promising investment: In-room televisions that walk a patient through a doctor’s orders – from bed rest to getting prescriptions filled.

“Like while you’re in the hospital, they educate you on the TV so that you cannot see your shows until you’ve gone through the education, and they test you,” she says.

It’s a bit like not getting dessert until you’ve had your vegetables. Maybe this all sounds incredibly simplistic, but venture capitalists say one of the trickiest things about this new world of investing is that their returns, in many cases, hinge on humans changing their behavior. And that’s a lot harder than building a robot.

–Christopher Weaver contributed to this report.