Richard S. Foster is retiring this week after 18 years as the chief actuary for the Centers for Medicare and Medicaid Services. His duties included projecting Medicare and Medicaid spending and the cost of health care legislation to help policymakers weigh the impact on the federal budget. Some of those estimates got him into hot water with members of both parties.

Foster recently sat down to discuss the highs and lows of his career with KHN’s Mary Agnes Carey. What follows is an edited transcript of that conversation. 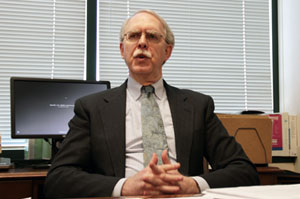 Medicare Actuary Richard Foster at his office in Baltimore, Md. He is stepping down at the end of January (Photo by Shefali Kulkarni/KHN).

A: Our estimates get misused so often, and it’s pretty hard to keep up with it. We try as best we can to contact the person or organizations who misuse the estimates, explain why they were misused and go on the record saying, “This is the full story.” We can’t do it every time. Sometimes — and these can be some of the most awkward situations — our own employers misuse the estimates.

Our work is only valuable for people who are trying to figure how these programs can work the best. But these days, a lot of demand is from people who just want to say, “My proposal is terrific” or “Somebody else’s proposal is awful.”

Q: During the 2003 debate over the creation of the Medicare prescription drug benefit, your office estimated it would cost $534 billion over a decade. The White House told Congress it would cost $400 billion and later the Congressional Budget Office estimated the cost at $395 billion.  According to the Department of Health and Human Services Inspector General, your boss at the time — CMS Administrator Tom Scully — told you not to respond directly to requests from Capitol Hill and threatened to take disciplinary action if you did. What was it like to be in the middle of such a heated fight?

A: The experience itself was pretty awful, as you can imagine. I’ve devoted my career to providing objective, nonpartisan, technical information to policymakers. Suddenly, I was ordered through an apparently legal process not to respond to congressional requests directly, which we’d been doing for decades, but instead to provide the information to the administrator and he would decide what to do with it. 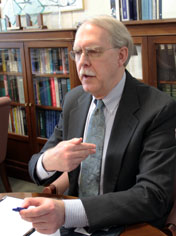 Obviously, I was very unhappy about this. However, requests [from Capitol Hill] continued to come in. I still had to provide [answers] to the administrator. It became apparent enough that he would pass along to the requester the ones that could be used to argue in favor of the Medicare Modernization Act.  But the ones that might be used to argue against it, he wouldn’t pass those on.

It wasn’t until the Inspector General and Government Accountability Office did major investigations to find out what went wrong that politicians and policymakers were reminded that, yes, Congress has a right to objective, technical information.

Q: Did you ever think about quitting?

A: I did, actually. In fact I was fully planning to quit in protest. I’d even started writing op-ed articles. I was going to resign pretty noisily, I’m afraid.

Q: What changed your mind?

A: The other managers in the office. When I told them that I thought I had no other alternative than to resign in protest, they basically argued that if I followed that route, I’d make a big splash for a couple of days. I’d get a lot of attention. It would blow over, and then there would be a vacancy, and the administrator could appoint somebody who might not be as ethical as we would all like.

And they argued that they thought I would be much more effective if I stayed in the position, worked inside to try to get it changed. I ended up doing that. The good thing that came out of it all was the longstanding precedent was reaffirmed — that we are independent, that we do provide objective, technical information to policymakers, regardless of whether they are on the administration’s team or not.

Q:  The cost of the Medicare prescription drug benefit has been lower than what your office or the CBO estimated. Why? 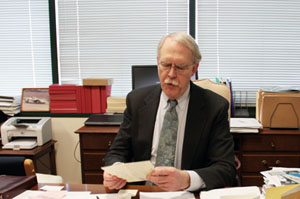 A: There are several reasons, but here’s the biggest one by far: Drug costs were growing 12, 14, 15 percent per year. We assumed the growth rates would start to come down. And they did come down. But they came down far faster than we ever would have guessed.

What happened is that all the insurance companies — in an effort to drive utilization to generic drugs — were creating these tiered benefit formulas and formularies. If you used a generic equivalent, you’d have a very modest co-payment.  If you used a brand name, you’d have a much higher co-payment.  And if you used a brand name that wasn’t on the formulary, it would be even higher yet. That effort was enormously successful in changing the rate of use of generic drugs. So at the time, the generic proportion of all prescriptions was in the neighborhood of 40 percent. Today, it’s over 75 percent.

Q:  Let’s talk about your estimates of the 2010 health care law. You projected that some health care providers might go out of business due to payment changes, that Medicare Advantage enrollment would drop and that national health expenditures would increase. Did the administration pressure you to change those?

A: In some cases we’ve gotten a lot of input and advice about what our assumptions really ought to be, or why what we’re using for those assumptions are inaccurate or incorrect. Nobody has tried to force us to change things.

Ever since the whole episode in 2003-2004, all the [CMS) administrators, all the [HHS] secretaries have been on the record saying  yes, they recognize the office has to be independent in producing this sort of technical work. Nobody has tried to silence us. But that’s not to say they haven’t had their own ideas or thoughts about the best technical assumptions to use.

Q: Do the health law’s payment changes give an incentive to providers to deliver health care in a way that costs less but produces better quality?

A: Hospitals and many other providers recognize that they are going to have to pay more attention to cost efficiency in the future. The question is how long can they do that and how much success can they have? If you think about doctors and nurses and home health aides, you name it, they all provide hands-on services, and it’s generally not that easy for such professions to improve their productivity.

If a hospital or another provider is losing money on every service it provides, then we may not have the luxury of continuing  to provide the services. That’s the problem. If the payment rates become wholly inadequate, they would have to say, “We can’t continue doing this.”  Congress would have to act.

It’s fairly unthinkable to me that Medicare beneficiaries would be unable to get the services they need because Congress would change the law to make sure that they could.

Q: How do we control health care costs in Medicare, Medicaid and the private sector?

A: Years ago, we thought that converting from cost-based reimbursement to prospective payment systems (a set payment that covers the entire cost of the admission) was the magic answer, and it helped a lot. Then, back in the early 1990s, everybody thought managed care was the magic answer.  And that helped some, too, although most of their success was in negotiating lower payment rates, which you can only take so far.

We’ve had other instances — pay-for-performance and consumer-driven health care — that people had hoped would be the magic answer. Right now, there’s a great deal of hope that further integration of care, greater bundling of payments and other innovations like that will be the answer.  I’m not optimistic that these things will, in fact, be any more successful than the best ideas of the past. I think they can all help.

Q: How would you adopt technology more prudently?

A: If you have something that is 10 times as expensive as the technology it would replace, and it really is not any more effective, why should we bother adopting that? And yet we do it all the time.

Q: What is your legacy here?

A:  Every year there’s an employee viewpoint survey across government. And almost every year the Office of the Actuary rates No. 1 in terms of positive attitudes; people thinking this is a great place to work. One of the things I’m proudest of is that I and the other managers here have helped to create the circumstances where people can flourish, people can be happy, people can be challenged and motivated and know that their work is important.

Q: What’s your next step?

A: I’m planning to get back into shape so that I can travel again with my wife and friends and pursue other activities. If life turns out to be too boring after six months or so, I reserve the right to change my mind.