RANCHO CUCAMONGA, Calif. — Devon Rising shakes his head and tries to cover his face with his hands. It’s time to get his few remaining teeth cleaned, and he fusses for a bit.

Rising, 42, is mentally disabled and blind. He has cerebral palsy and suffers from seizures. It’s hard for him to get to a dentist’s office, so Aminloo brought her dental picks, brushes and other tools to him at the residential care facility he shares with several other people who have developmental disabilities.

Rising is among a vulnerable class of patients who are poor and so frail they can’t leave the nursing home or, in his case, the board-and-care home to visit dentists. Instead, they rely on specially trained dental hygienists like Aminloo, who come to them.

But this may be the last time Aminloo cleans Rising’s teeth. And it’s not because of his resistance.

Hygienists say some of their patients are no longer getting the critical dental care they need because of recent policy changes: The state dramatically slashed payment to providers and created a preauthorization process they call cumbersome.

In 2016, Denti-Cal, the publicly funded dental program for the poor, cut the rate for a common cleaning procedure for these fragile patients from $130 to $55. Hygienists say they can’t afford to continue treating many of them for that kind of money. They also claim that half of their requests to perform the cleanings are rejected — an assertion not supported by state data.

The Department of Health Care Services, which runs Denti-Cal, said it made the changes to bring the program’s reimbursement policy in line with other states and to reduce “unnecessary dental treatment.”

But Aminloo insists the new state regulations victimize the most vulnerable people, who she said are losing their access to routine dental care.

“If these patients don’t get preventive oral care, their overall health is going to suffer,” she warned. 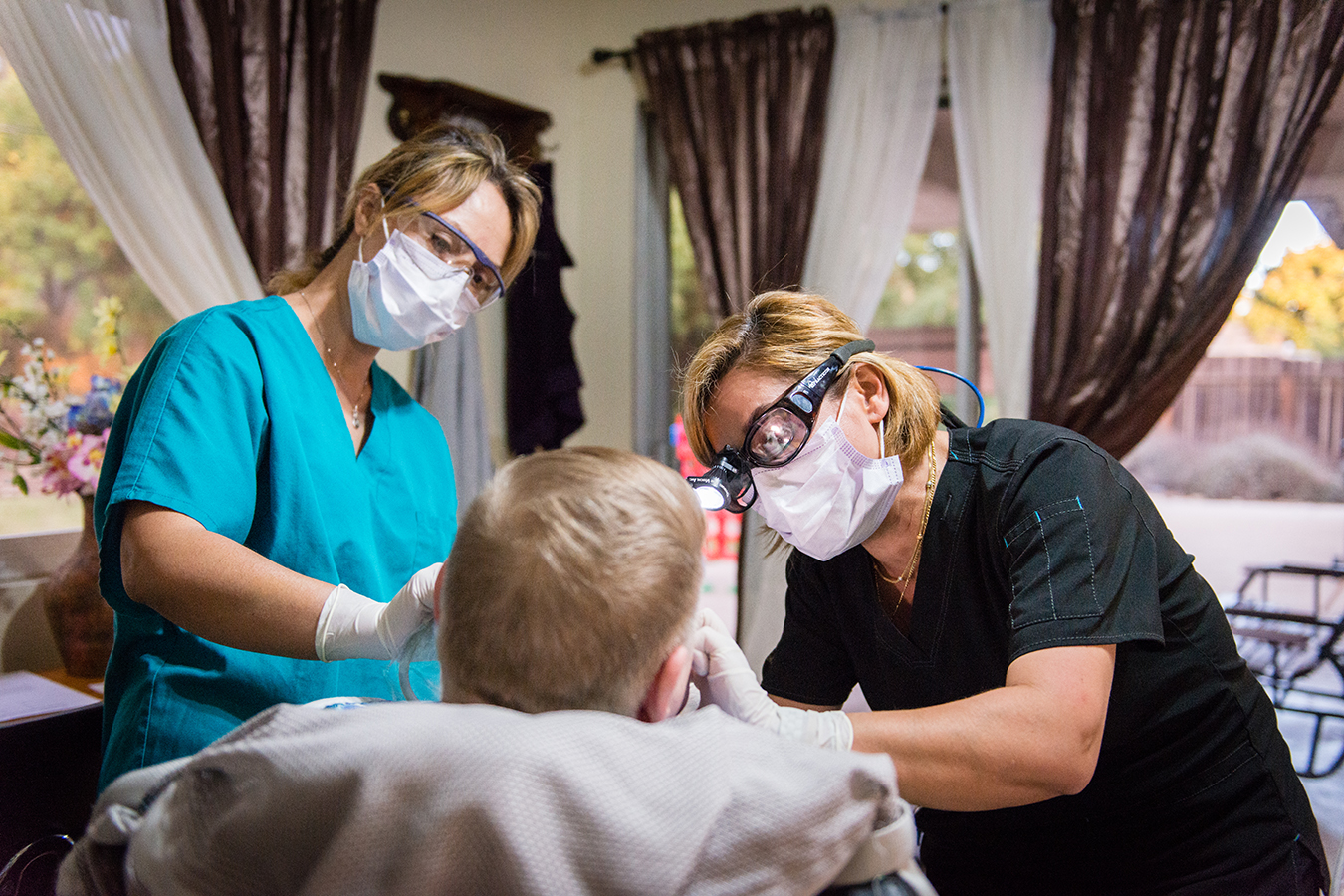 Dental hygienists are generally allowed to practice without the direct supervision of a dentist in 40 states, including Nevada, Texas, Colorado, Michigan and Florida. But the type of patients they can see varies by state. So do reimbursement and preauthorization rules.

Washington state’s Medicaid program pays providers $46 for a similar cleaning procedure, said Anita Rodriguez, a member of the Washington State Dental Hygienists’ Association. Hygienists there don’t have to obtain preauthorization to perform cleanings, but they are required to explain why the cleaning was necessary when they bill Medicaid.

“Our state makes access for our independent hygienists relatively uncomplicated though, like other Medicaid providers, we make pennies on the dollar for our care,” she said.

Since California reduced payments for “maintenance” cleanings for these patients — usually performed every three months to treat gum disease — many hygienists have stopped seeing them. Eight hygienists, including Aminloo, filed a lawsuit in Los Angeles County Superior Court in 2016, arguing that the health care services department cut the reimbursement rate without first obtaining necessary federal approval.

At one point, it appeared as if the department had agreed to settle and cancel its rate change but then backed out, court documents show. The department said it will not comment on pending litigation.

At the time of the rate reduction, the state also started requiring dental hygienists to obtain prior authorization to treat gum disease in patients who live in special care facilities. Hygienists must submit X-rays along with their authorization requests. But they say it’s almost impossible to take decent X-rays of elderly or disabled patients who have a hard time controlling their head movements, or who refuse to open their mouths widely.

When hygienists do manage to get X-rays, their requests are often denied anyway, hygienists from across the state told California Healthline.

In a letter to the state legislature last year, the California Dental Hygienists’ Association wrote that more than half of their authorization requests had been denied since the change. “Denti-Cal’s sweeping new rules are destroying the lives of fragile patients and the women who own small businesses providing care at the bedside,” the letter said.

But state statistics show a much lower denial rate.

From the time the change took effect in July 2016 through June 2017, the health care services department approved 10,000 of nearly 13,000 deep cleanings requested by these dental hygienists to treat gum infections, according to the data. It also approved 31,300 of the nearly 33,000 requests for routine cleanings that follow a deep cleaning. The state said it paid more than $2.5 million to dental hygienists for these procedures.

Darla Dale, a hygienist in Eureka and a vice president of the hygienists association, said the department’s denial numbers don’t reflect what her organization is seeing.

“There’s no way that’s true,” Dale said. “We’re in contact with these hygienists. … Many have stopped working because we can’t spend our lives trying to get authorization.” 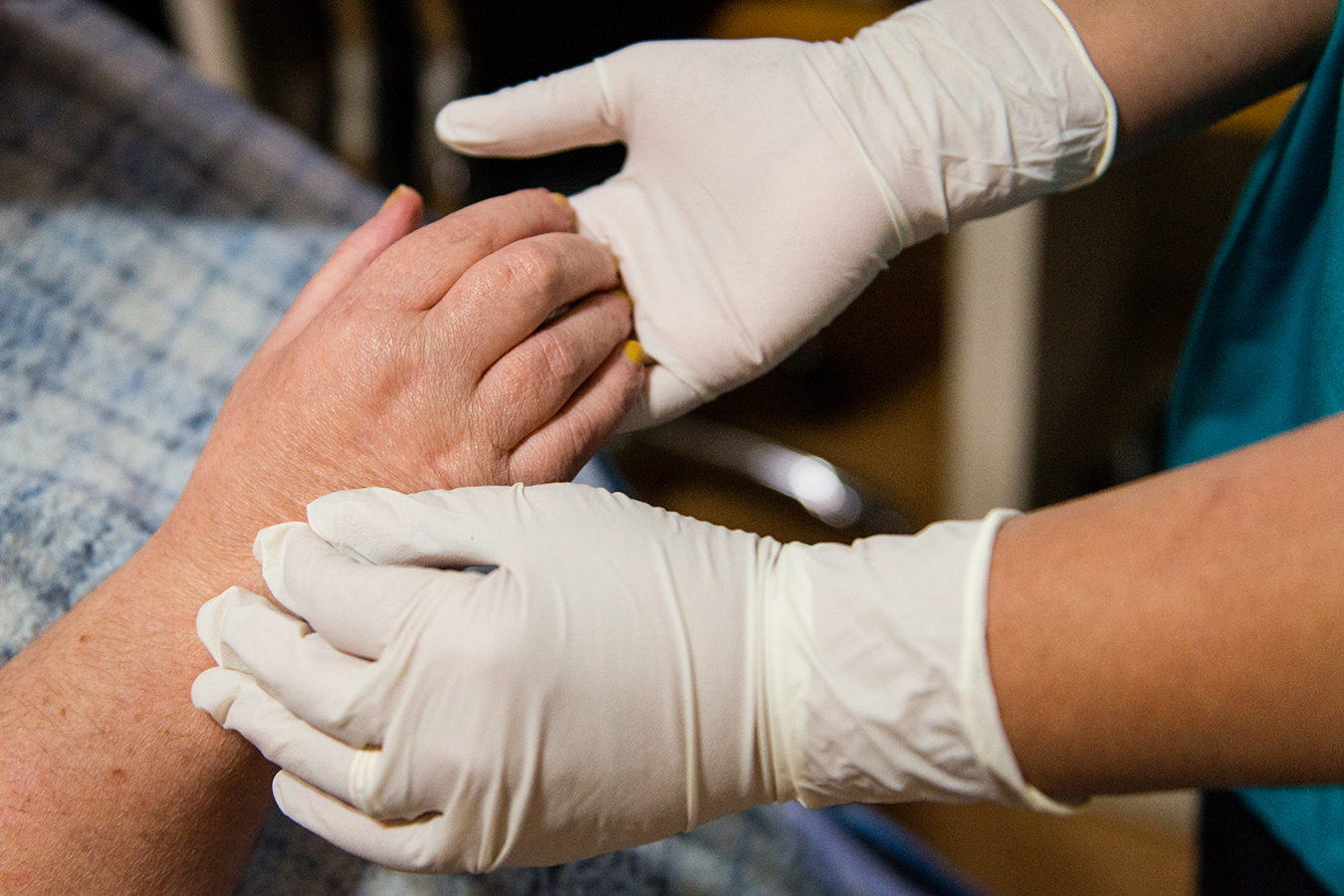 A dental hygienist holds a patient’s hand to calm her before her regular teeth cleaning. Patients in residential homes find it hard to visit the dentist and rely on specially trained dental hygienists to come to them. (Heidi de Marco/California Healthline)

Darci Trill, a hygienist working in Alameda and Contra Costa counties, is among those who stopped seeing patients in nursing homes after denial letters piled up. “I lost about 70 percent of my Denti-Cal clients,” she said.

State health officials pointed to the American Academy of Periodontology, which considers the new authorization guidelines standard, including X-rays to diagnose gum disease.

An April 2016 report by the Little Hoover Commission, an independent state watchdog agency, said the state health services department found it “unusual” that nearly 88,000 out of 100,000 Denti-Cal-eligible patients in nursing homes had received deep cleanings during the 2013-14 fiscal year. This figure and other factors raised “questions about their necessity ­— and hence the new policy requiring X-ray documentation,” the report said.

In frail patients, advanced gum disease can cause not only tooth loss, but pneumonia and other respiratory issues, Trill said.

Maureen Titus, a hygienist in the San Luis Obispo area, said her clients rely entirely on caregivers for their dental hygiene, and that brushing and flossing is neither easy nor effective. “Most have bleeding gums, inflamed gums and tartar buildup,” she said.

Among patients who are attached to feeding tubes, tartar builds up quickly because they don’t chew their food, Aminloo said. “After two or three months, you can’t even see their teeth.”

The independent practice of dental hygienists in California dates to 1997, when the state legislature allowed them, with additional training and certification, to work without the direct supervision of dentists. Some started their own mobile businesses. This is the first time in the intervening 20 years that they’ve had to obtain preauthorization to perform dental cleanings, Trill said.

The California Dental Association, which represents dentists, said dentists have long been required to get prior approval for cleanings for patients in special care facilities.

“We supported the department’s decision to equalize requirements for periodontal services, regardless of whether a dentist or hygienist provides the service,” said Alicia Malaby, the association’s spokeswoman.

Dr. Leon Assael, the director of community-based education and practice at the University of California-San Francisco’s School of Dentistry, said preauthorization requirements in other states, including Minnesota and Kentucky, where he used to work, have also delayed or limited care for homebound patients.

The requirements have driven providers out of the system, he said, leaving patients behind.

“If this were toes being lost, this would be a scandal,” Assael said, “but with teeth, it’s been accepted.”