This story is a collaboration between Kaiser Health News and 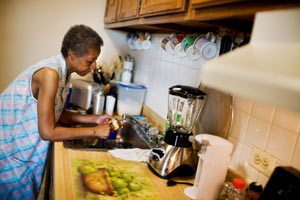 Margaret White peels potatoes as she prepares lunch at her home in Alexandria, Va. With help from Inova Mount Vernon Hospital, White is doing a better job managing her congestive heart failure — and staying out of the hospital (Marcus Yam – Washington Post).

They are the patients who leave the hospital, only to boomerang back days or weeks later. They have become a front-burner challenge not only for hospitals and doctors but also for those trying to rein in rising costs.

Typically elderly and suffering from the chronic diseases that account for 75 percent of health-care spending, their experiences of being readmitted time and again reflect many of the deficiencies in a fragmented, poorly coordinated health system geared toward acute care.

Take Margaret White. With better management of her congestive heart failure, she might have avoided being rehospitalized this spring for five days. She’s back home again now, doing well, with help from a new monitoring program at Inova Mount Vernon Hospital in Alexandria.

There are many reasons for readmissions, including high rates of medical errors and hospital-acquired infections; lack of communication between doctors who care for patients in the hospital and their regular physicians; trouble getting a prompt doctor’s appointment after discharge; missed referrals for home health care; and poor coordination and medication management during transitions from hospital to home or nursing home.

“Transitions are just so dangerous. Every time you move a patient from one setting or facility to another, you have to ask, ‘Is something going to go wrong?’ ” said Joan Teno, a geriatrician at Brown University Medical School, who has often treated her patients in nursing homes for conditions that otherwise would propel them back to the hospital. Teno said the ways nursing homes are paid mean it’s often easier for them to let the hospitals take care of sick patients.

Experts don’t agree on how many readmissions are avoidable. Dozens of promising initiatives designed to cut down on them are underway. But many experts say sweeping changes are needed in how health care is delivered and how hospitals and doctors are paid – sensitive issues that confront Congress and the medical industry in the debate on overhauling the health system.

President Obama and health reformers in Congress are looking at many ways to reward quality and emphasize prevention and coordination. Right now, hospitals – such as Inova Mount Vernon – that do a better job of preventing readmissions sometimes end up losing money because the health-care system doesn’t pay for the extra work they do. Some health reform proposals would change the way hospitals are paid, so that stopping readmissions becomes good business.

One idea is to bundle the payments to hospitals, doctors and perhaps nursing homes or rehabilitation centers, to cover both the hospitalization and those first critical weeks after discharge.

Another proposal is to have Medicare penalize hospitals with high readmission rates for eight common chronic diseases. Members of both parties have been looking at ways of paying primary care doctors more to help patients manage their chronic diseases and avoid trips to the hospital every few weeks or months.

Both doctors groups and the American Hospital Association have agreed that it’s time to address readmissions. The association, however, prefers to start with pilot programs to test new payment systems rather than implementing an across-the-board new approach. The AHA also says hospitals should not be held responsible for problems that patients encounter when they’re outside the hospitals’ control.

Readmission costs are staggering. One of five Medicare hospital patients returns to the hospital within 30 days – at a cost to Medicare of $12 billion to $15 billion a year – and by 90 days the rate rises to one of three, according to an analysis of 2007 data by Stephen Jencks. Within a year, two out of three are back in the hospital – or dead. Jencks consults on this issue for the independent Massachusetts-based Institute for Healthcare Improvement.

For the population as a whole, including patients too young for Medicare, the readmission rate is 14 to 19 percent for the first 30 days, said Jencks.

One tactic used by Inova Mount Vernon is to change the way it deals with some discharged patients.

For example, the hospital began its HeartLink program in November, after Honora Fowler, a nurse, and Lynne Weir, a physical therapist who specializes in cardiac rehabilitation, brainstormed about how to help their congestive heart failure patients take better care of themselves.

Patients monitor themselves daily and call a toll-free telephone line to answer some simple questions about weight gain, swelling and breathing difficulties.

Fowler reviews the answers to see whom she needs to call, whom she needs to keep an eye on for a day or two, who needs their medications adjusted and who better get in to see a doctor right away. Occasionally, with a patient with advanced disease, she calls a case worker or doctor to suggest it’s time to have a gentle conversation about palliative care or hospice.

White’s first hospitalization for her heart disease was last September, before HeartLink was up and running. When she returned this spring, her cardiologist talked to her about HeartLink.

“I hadn’t been paying attention to the fluids. In fact, when I gained the weight, I didn’t realize it was all fluid, I thought it was good, that I was regaining the weight I had lost” during treatment a year earlier for breast cancer, said White, 59. Now she weighs herself daily, checks her feet for swelling, pays attention to changes in her breathing, and calls it all in to HeartLink, which Inova offers at no charge.

After months of barely getting out of bed, White has started a small summer vegetable garden on her balcony in Alexandria.

“We catch problems faster,” Fowler said. Because the patients and their families trust her, she can find out what went wrong and how to stop it. Sometimes it’s as simple as persuading a heart failure patient that it’s not okay to splurge occasionally on a bacon double-cheeseburger.

Some doctors are skeptical of this new stress on avoidable hospitalizations. At an American Medical Association meeting in Washington this year, some questioned whether they could do much to reduce hospitalizations. Cases can be very complicated, they said; patients don’t always follow directions.

HeartLink is new and small, and the results are anecdotal and preliminary. But other hospitals and doctors say they’re proving that innovative approaches can cut readmissions while providing higher-quality care at lower cost.

At Saint Luke’s Hospital in Cedar Rapids, Iowa, nurse Peggy Bradke and her team use a simple “Teach Back” system to make sure that patients or a family member truly understand all the medications and treatments needed at home.

Instead of going home with a sheaf of incomprehensible discharge instructions, patients leave St. Luke’s with simple information, a refrigerator magnet with danger signs, a phone number they can call day or night and an appointment with their doctor, preferably within three to five days. Making that appointment is essential. Jencks’s research has shown that half the patients who are readmitted within a month hadn’t seen a doctor after leaving the hospital.

Then, even though it’s not paid for by Medicare or other insurance, St. Luke’s sends a nurse to the patient’s home at no charge 24 to 48 hours after discharge, and follows up later with a phone call.

“We’ve had some great catches,” said Bradke. “We find a shoebox full of meds that is completely different from what we thought they were taking in the hospital. Or we find that one of the hospital prescriptions wasn’t filled or [was] not delivered.”

Bradke’s team intervened when Frederick Peterson, 72, a “frequent flier” who has lost track of how many times he has been admitted, returned to the hospital yet again in January. Among his many health problems, Peterson has had congestive heart failure for a decade, which he has not always controlled well. Sometimes he has gone back into the hospital just days after being discharged.

“A nurse came home and went over all my medications. She even went over the labels in our canned food,” Peterson said. “I knew salt was bad, but I still used it. But this nurse explained it more thoroughly and now we don’t use salt.”

St. Luke’s three-year-old program has cut the hospital’s 30-day readmission rate for congestive heart failure patients in half, from 12 to 6 percent. The goal is to bring it to 4 percent. Even when patients do return to the hospital, they tend to have shorter stays and less severe illness.

Pat Rutherford, a vice president at the Institute for Healthcare Improvement, has been working with hospitals across the country that want to see less of their frequent fliers.

“There are a lot of innovations out there, and we have growing evidence that we can improve this for the patient, to make their experience better and make sure they have a better handoff to a home or community setting,” she said.

“How many hospitals are ready to step up to the plate? That’s to be determined,” she added. “But more and more are becoming aware that in terms of quality and cost, this could be a huge home run if we do it right.”

This story was produced through a collaboration between The Post and Kaiser Health News. Send comments to health@washpost.com.