When Portland resident Doris Keene raised her four children, she walked everywhere and stayed active. But when she turned 59, she says, everything fell apart.

“My leg started bothering me. First it was my knees.” She ignored the pain, and thinks now it was it the sciatic nerve acting up, all along. “I just tried to deal with it,” Keene says.

But eventually, she went to a doctor who prescribed Vicodin and muscle relaxants. In 2012, about one in four Oregonians received an opioid prescription – more than 900,000 people. The state currently leads the nation in nonmedical use of opioids. And about a third of the hospitalizations related to drug abuse in Oregon are because of opioids.

Keene says the drugs helped her, but only to a degree. 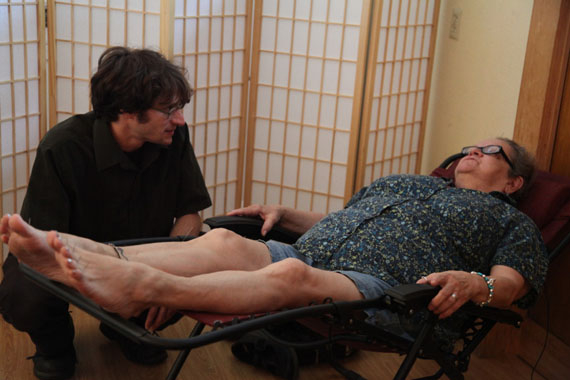 “My body was saying, ‘Well, if I take another one, maybe it’ll work.’ So, I mean, that’s just human nature. Especially when you’re in the kind of pain I was in. You get to the point after months and months of pain where you’re begging for anything – anything — to relieve the pain,” she says.

In the end, Keene says, she became addicted. Her doctor ended up cutting off her supply of pills.

“I got very upset. I said, ‘What do you mean? You gave them to me. Why’d you give them to me and then tell me that I couldn’t have them?’ I was begging,” she says.

Then Keene went to the Quest Center for Integrative Health, a pain management center in Portland.

Lying on a fold-out chair in a darkened room with several other people, Keene has about a dozen acupuncture needles in place.

“I come in here wearing back braces, and knee braces and a crutch, and Dr. Dave told me, ‘Get rid of them! They’re just weakening your muscles,’ ” Keene says. “And when I could walk out of here after the first acupuncture [treatment], I wanted to grab him and kiss him.”

David Eisen is Keene’s “Dr. Dave,” and executive director of the Quest Center. He is board certified in traditional Chinese medicine and acupuncture, and says doctors need to stop thinking of opioids as a first line of defense against pain.

“There should be an array of things for people to choose from,” Eisen says, “whether it be chiropractic care, or naturopathic care, or acupuncture, nutrition, massage. Try those things — and if they don’t work, you use opioids as a last resort.” 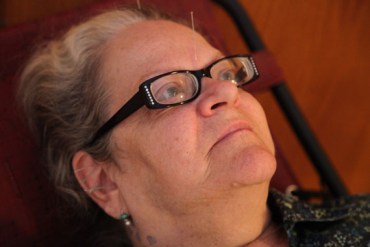 Doris Keene says acupuncture treatments ease her pain at least as effectively as the Vicodin and muscle relaxants she once depended on. (Photo by Kristian Foden-Vencil/Oregon Public Broadcasting)

“The only thing that might have been covered in the past was narcotics,” Taray says. “But treatments such as acupuncture, chiropractor, massage therapy, physical therapy and rehab would never have been covered.”

But starting in January 2016, the state will fund many of these back-pain treatments for patients who get their health care via Oregon’s version of Medicaid — the Oregon Health Plan. While the treatments may cost more than a course of pain pills, the hope is that money will be saved by reducing the number of people who become addicted to opioids or abuse them. And pills aren’t always as effective as some people assume.

“Research is out there that suggests that with back conditions we’re spending a lot of money on health care treatments and services that aren’t improving outcomes,” Taray says.

Oregon also has not found overwhelming evidence that acupuncture, yoga or spinal manipulation work better than other options. But, as Taray points out, these alternatives don’t involve drugs.

From Pills To Pins: Oregon Is Changing How It Deals With Back Pain