Testing of computer systems and training of consumer assistance guides are behind schedule, but the Obama administration has met other deadlines in its efforts to open new marketplaces where millions of consumers might shop for insurance starting this fall, according to a Government Accountability Office report released Wednesday. 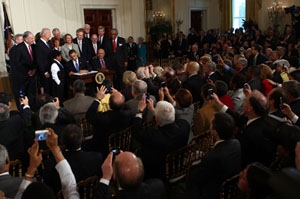 U.S. President Barack Obama signs the Affordable Care Act during a ceremony with fellow Democrats in the East Room of the White House March 23, 2010 (Photo by Win McNamee/Getty Images).

The report said that the Centers for Medicare & Medicaid Services, or CMS, “has many key activities remaining to be completed,” including those that deal with eligibility and enrollment in the exchanges,  development and implementation of a “data hub” that will connect the exchanges with other federal and state agencies to determine applicants’ eligibility, and review and certification of the health insurance plans offered to consumers.

“Much remains to be accomplished within a relatively short amount of time” for the exchanges to work properly on Oct. 1, the GAO said. The “still unknown and evolving scope” of activities that CMS must provide in states that have chosen not to participate is problematic, investigators said, as are the “large number of activities remaining to be performed – some close to the start of enrollment.”

While the deadlines missed so far may not affect the law’s implementation, “additional missed deadlines closer to the start of enrollment could do so,” GAO found.

In a response included in the report, the Department of Health and Human Services said the agency has made progress in establishing exchanges and that the exchanges would be up and running in all states by Oct. 1.

Opponents of the health law said the report proves the measure won’t work as intended and that Americans will suffer.  “News of delays and missed deadlines are now just as prevalent as reports of Obamacare’s broken promises and the looming rate shock in store for millions of Americans,” House Energy and Commerce Committee Chairman Fred Upton, R-Mich., said in a statement.

Upton, along with Rep. Darrell Issa, R-Calif., who chairs the House Oversight and Investigations Committee, and Sen. Orrin Hatch, R-Utah, who is the top Republican on the Senate Finance Committee, requested the study.

The GAO reports that CMS is behind schedule on consumer assistance activities to the states with federal exchanges. For example, CMS was two months late in announcing funds to “navigators” – community organizations and nonprofits that will hire and train people to help consumers sign up for health insurance. CMS had planned to issue the funding announcement in February, allowing enough time for two rounds of awards in July and September. Instead, the agency did not announce the grants until April, leaving time for only one round of awards, which is expected on Aug. 15.

The navigator grants will total up to $54 million for the federally run marketplaces  – “a drop in the bucket,” according to Stan Dorn, a senior fellow at the nonpartisan Urban Institute. Some states received as little as $600,000.  That’s far less than states running their own marketplaces. California, for example, is spending $50 million to fund in-person help for consumers.

All navigators are expected to complete a web-based training and certification course. CMS had expected to begin training by July, but the course may not be ready until August.

Nonetheless, CMS officials indicated that the navigators would  be available by Oct. 1, when enrollment for 2014 plans begins, according to the GAO report.

Insurers that want to sell health coverage on the exchanges had to apply by May 3, and CMS, along with help from a  contractor, expects to evaluate and certify those plans by July 31, according to the GAO report. Information about those plans is expected to be available on the exchange website by Sept. 15.

The GAO analysis also took a close look at the status of the complicated technology that will be needed for the exchanges. GAO said that some limited testing has begun of the information technology systems needed to determine whether consumers seeking coverage in the marketplaces are eligible for federal subsidies and to enroll them in health coverage. But it noted that much more needs to be done before October.

“While CMS has met project schedules, several critical tasks, such as final testing with federal and state partners, remain to be completed,” the report said.

Critics said the report shows that CMS and other agencies are falling behind, but others said the conclusion was that much progress has been made.

“It is the GAO’s job to outline problems that could occur,” said Dan Mendelson of the private consulting firm Avalere Health, but the report’s conclusions are “getting spun through this lens of political discontent, so as a result, everyone is freaking out about it.”

States, he said, are rightly concerned that delays in the income and eligibility information technology might not operate efficiently at first.

“That would force them to do manual enrollment – get on the phone with people – and that’s expensive,” said Mendelson, who oversaw health programs at the Office of Management and Budget during the Clinton administration.

Mark McClellan, who was in charge of the rollout of the Medicare drug benefit in 2006 for the George W. Bush administration, said testing of some IT systems for that project began not long after the law was passed in 2003. But, he said, work continued right up to and even after the program began. That rollout was initially marked by glitches that included enrollment problems, and some seniors who qualified for subsidized coverage were mistakenly told they didn’t have it when they showed up at pharmacy counters.

“You are limited in what you can test ahead of time,” said McClellan. Once real data starts flowing through a system, unexpected problems crop up because real data is always messier than test data sets, he said.

While the Obama administration still has time to get the testing done,  McClellan said, he cautioned that “it is tight.”

The GAO report also states that CMS has spent $394 million from fiscal year 2010 through March 31 of this year on various activities to get the federal funded exchanges established and listed the major contracts. CMS officials said the totals did not include agency salaries or other administrative costs.

The report on the federal insurance marketplaces was one of two on health law implementation released by GAO Wednesday. The other report looked at federal and state efforts to establish the Small Business Health Options Programs (SHOPS) in which small employers can buy coverage for their workers. In that report, GAO found that “CMS and states have made progress in establishing SHOPS, although many activities remain to be completed and some were behind schedule.”