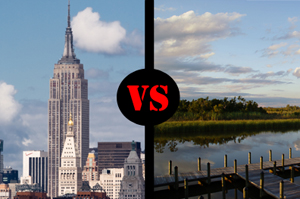 Some regions of the country that have been lambasted for high levels of Medicare spending actually are below the national average once the severity of patient sickness and special local expenses are taken into account, according to data from a new government analysis.

Manhattan, Contra Costa County, Calif., and Newark, N.J. – areas suspected as places where doctors and hospitals may be performing too many procedures – actually have Medicare spending below the national average, given their patients’ medical needs, according to the new calculations from the federal Centers for Medicare & Medicaid Services, or CMS.

In CMS’s analysis, 27 of the country’s 306 hospital markets switched from higher than average to lower than average spenders after patient health and geographic cost factors were considered. Conversely, 60 regions that appeared to be low spenders in raw dollars actually were above the national average once the adjustments were made, the data show. Those areas include Ocala, Fla., Mobile, Ala., Tulsa, Okla., and Wichita, Kan.- nearly one out of every five regions.

The CMS analysis may provide new fodder for an ongoing debate in Congress and health policy circles about altering Medicare payments to reward places that provide good medical care at a reasonable cost. The data were requested by the Institute of Medicine, which is examining geographic variation in health care spending and making recommendations about Medicare to U.S. Secretary of Health and Human Services Kathleen Sebelius. The institute made the data public last week.

Underlying the drive to change reimbursements is the hypothesis that hospitals and other providers in high-spending areas are performing excessive procedures in order to make more money from Medicare’s fee-for-service payment model. For decades, some prominent researchers, most notably at the Dartmouth Atlas of Health Care, have argued that needless treatments are the reason that spending is higher in some places than others. The research has been cited as evidence that as much as one third of the $2.7 trillion expected to be spent on health care in the United States this year may be unnecessary.

Providers in many of the high cost areas have disputed this, saying their spending is elevated because they treat sicker patients. They also note that some areas may appear to be spending more on patients when they are getting extra money from Medicare to compensate for the costs of training doctors, treating large numbers of impoverished patients or having to pay higher wages.

The new data gives ammunition to defenders of some high-cost areas even as it confirms the existence of significant variations in Medicare spending levels across the country.

James Reschovsky, a senior researcher at the Center for Studying Health System Change, a Washington think tank, says the CMS analysis shows that the variation among regions is about a third smaller than previous estimates and that much of the differences can be explained by the overall health of the patients in a given area. CMS controlled for such differences by examining the prevalence of 189 different medical diagnoses among patients. CMS revised each region’s costs based on the degree that they had to provide more or less expensive treatments than average. CMS also took into account other risk factors, including the overall age of the Medicare patients, whether they lived in a nursing home and whether they had qualified for Medicare because of disability.

“If you look at the data, you’re going to see that high cost areas have sicker patients,” Reschovsky says. “There’s far more variation among physicians and providers within a geographic area than across areas.”

Even after CMS adjusted for these factors, however, there remained a significant spread in spending among different regions in 2008. Medicare spent $9,468 for the average beneficiary in Monroe, La., but only $4,959 in Honolulu. (In CMS’s calculations, the national average spending per Medicare beneficiary was $7,500 after the special payments were removed and the nature of patient sicknesses taken into account.)

Elliott Fisher, one of the leaders of the Dartmouth Institute for Health Policy & Clinical Practice, which publishes the Dartmouth Atlas, said the CMS analysis supported “the key conclusions of the Dartmouth Atlas: substantial variations in spending remain across U.S. regions that are not explained by differences in prices or underlying illness rates. These differences point to important opportunities to improve the efficiency of U.S. health care.”

In the CMS analysis, the majority of the highest spending areas remained so after the adjustments. Miami, where federal prosecutors are intensely prosecuting Medicare fraud, still topped all regions with spending that averaged $10,145, which is 35 percent above the national average. McAllen, Texas, made infamous by a 2009 New Yorker article, dropped from second place to fourth, but still spent $9,370, or 25 percent above the national average. Many low-spending areas, such as Burlington, Vt., Rochester, N.Y., and Tacoma, Wash., also didn’t change much.

In Mesa, Ariz., spending was 5 percent below average. But the average Mesa Medicare patient was slightly younger than the national average, and fewer patients than average had diagnoses that were expensive to treat such as heart failure and diabetes. After all the adjustments, average Medicare spending in Mesa became $8,370, which put it 12 percent above average.

CMS provided similar estimates for the states, although most researchers generally consider that less useful data because state boundaries don’t conform to specific hospital markets. In the new risk-adjusted analysis, Maryland topped all other states in spending per Medicare beneficiary, although officials cautioned that since Congress uniquely allows Maryland to set its own hospital reimbursement rates, the state can’t be fairly compared to payments set by Medicare elsewhere else. Maryland comes out so high in the CMS analysis because it includes extra Medicare payments for physician training and treating the poor that CMS removed from all other states’ numbers.

In CMS’s list of top spending states and territories for Medicare, Maryland was followed by Louisiana, Florida, Mississippi and Texas. The Virgin Islands was the least expensive, followed by Hawaii and Puerto Rico.

The CMS analysis is the latest in a series of studies reassessing geographic variation in Medicare spending. Last December, the Medicare Payment Advisory Commission, which makes recommendations to Congress, performed its own analysis that adjusted for regional cost differences and the health of patients to compare how some areas perform more services and drive up Medicare spending. That study, which used different methods than CMS did, also found a 30 percent difference between the highest- and lowest-spending areas.

Michael Chernew, a Harvard Medical School health policy professor who has studied geographic variation, warns there’s a danger if the discussion is dominated by arguments about which regions are truly high spending.

“It’s a much more complicated story than just finding areas and labeling them good or bad,” he says. “Even once you do the adjustments, you’d still reach the conclusion there’s so much variation in the health care system it’s hard to explain that as random chance.

“In health care, we could improve our system if we knew the best and worst ways of practicing” medicine, Chernew says. “The real contribution” of the research, he says, “is to illustrate that there’s not one unique practice pattern that’s being followed all across the country.”

This story was corrected from an earlier version.

From California To The New York Island, A New Understanding Of Higher Medicare Spending