Politically, Georgia is fighting the health law at every turn.

Gov. Nathan Deal, a Republican, has chosen not to expand Medicaid, and the state’s insurance commissioner publically vowed to obstruct the Affordable Care Act.  But that doesn’t mean Georgia isn’t seeing a financial benefit from the law. 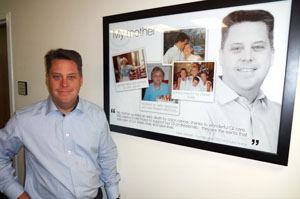 Mark Gilreath heads the medical device company, EndoChoice, based in Alpharetta, Georgia. The business is part of a health tech boom in the state (Photo by Jim Burress/WABE).

Take the company called PreMedex.  Founder and president Van Willis knows that just a few years ago, a company like his would’ve been a hard sell — impossible, even.  The two-year-old company contracts with hospitals and doctors’ offices to call patients after they’re discharged. Under the Affordable Care Act, hospitals are penalized if Medicare patients are readmitted within a month for several specific illnesses.

“From a hospital standpoint, there was very little, if any, communication with patients once they leave,” Willis explains. “A logical way to communicate with patients if you can’t be in their homes is, of course, through the telephone.”

Scattered around a half-dozen office cubicles, PreMedex employees don telephone headsets on a recent morning and sit down in front of computers that automatically dial patients. After telling patients they are calling on behalf of doctors and hospitals, the workers ask some simple but important health questions: Have you had any fever? Are you in any pain?

How patients answer could mean the difference between a hospital’s profit and loss.  Private insurers will probably follow Medicare’s lead on punishing readmissions.  Willis says that’s creating a new market for companies like PreMedex.

“We’ve got clients across the country – small clients, large clients – they all feel the same pressures,” he says. 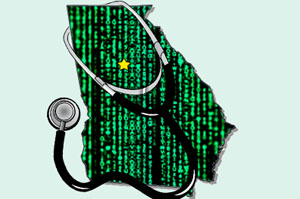 PreMedex started with five employees. It’s up to 25 and growing.  It’s a story told over and over across Georgia, according to Tino Mantella, who heads the Technology Association of Georgia.

“We like to say it’s the health IT capital of the nation,” Mantella says.  “There are 20,000 technology companies in the state. We did an economic assessment and that came out to be $113.1-billion impact.”

Mantella says that’s about 17 percent of Georgia’s industry, and the health IT part of it is growing fast.  Jobs pay an average of $81,000 a year.  He says the Atlanta suburb of Alpharetta actually has as many tech companies as startup mecca Austin, Texas.

From Basement To Big Business

Medical device company EndoChoice is one company that calls Alpharetta home. It manufactures equipment like flexible cameras used to check for colon polyps.

Mark Gilreath,  EndoChoice’s founder and CEO, says the company’s workforce has grown exponentially in almost no time. “We were in my basement a few years ago with an idea, to adding a few here and a few there. Today, we’re approaching 400” employees, he says.

Gilreath says the company’s technology helps doctors perform procedures more effectively, reduce infections and give better care to patients. Those are all things encouraged by the Affordable Care Act.

Despite EndoChoice’s success, Gilreath is concerned a provision in the health law will stifle innovation and kill medical device startups before they get off the ground.

The law imposes a 2.3 percent tax on medical device company revenues. “It’s shaking the investment community,” he says. “It’s shaking the device industry. It’s forcing companies to do dramatic things, and it’s just not healthy for the United States.”

Gilreath says he’s cut back on research and development as a direct result of the tax. Even so, his company is on track for more than $100 million in revenue this year.

EndoChoice is a textbook example of the type of tech venture Georgia wants.  A recent Commonwealth Fund study projects that in 2022, the state will spent about $1.3 billion to attract such companies.

This story is part of a partnership that includes NPR, WABE and Kaiser Health News.