Without altering their opposition to expanding Medicaid under the Affordable Care Act, Georgia officials now say they’re thinking about asking the federal government for more Medicaid money to help the state’s struggling rural hospitals and its big “safety net” hospitals like Grady Memorial in Atlanta.

The outlines of the plan are unclear. State health officials say they will seek permission from the feds to “experiment” with Medicaid in a way that would shore up rural and safety net hospitals. But there are no plans to expand Medicaid, they said. 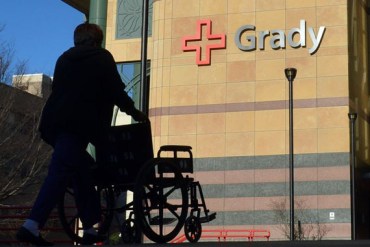 An employee returns a wheelchair to Grady Memorial Hospital after escorting a patient to their car Thursday January 16, 2014. (Photo by Brant Sanderlin/Atlanta Journal-Constitution)

Dozens of rural hospitals face funding shortfalls so acute that they threaten access to care for tens of thousands of Georgians across the state. Since 2001, eight rural hospitals have closed and more than a dozen are considered “financially fragile.”

Many hospitals support expansion of Medicaid to insure hundreds of thousands of Georgians who don’t have any health coverage — and turn them into paying customers for the hospitals. The expansion would bring in tens of billions of new federal dollars. But Gov. Nathan Deal and other Republican leaders have refused, saying the state can’t afford its share of the cost of expansion.

The current action contemplated by health officials involves obtaining a special waiver from the federal government to change the way Medicaid works in Georgia. Six states have used the program — called a Section 1115 waiver — to expand Medicaid in a way that is politically acceptable to conservatives. For example, Arkansas obtained an 1115 waiver that enabled it to expand Medicaid on its own terms: instead of using the new money to grow a government program, it used the Medicaid funding to enable uninsured residents to buy their own insurance plans.

Authorization for a Section 1115 waiver was quietly slipped into the state budget that Deal is expected to sign on Monday. But officials insist the waiver won’t be used to expand Medicaid.

Expansion ‘the only way to do it’

Monty Veazey, head of the nonprofit Georgia Alliance of Community Hospitals, says expansion represents the last and best hope for many hospitals.

“There’s no question,” he said. “It’s the only way to do it or they will close.”

Larger regional hospitals are no longer looking at merging with or buying struggling smaller hospitals, Veazey said, and many counties don’t have the tax base to generate more funding for the hospitals.

He said he hopes that, if the state does obtain a Section 1115 waiver, it will ultimately use the waiver to expand Medicaid. He added that his group plans to work with other hospitals and business leaders in the coming months to create a proposal for the governor to consider.

Gov. Deal said in an interview Wednesday that he remains opposed to expansion over his concerns of the long-term price tag on the program. And, he added, an upcoming Supreme Court ruling this summer could kill Obamacare tax credits that could prod Congress to intervene with a more conservative alternative.

“That will be a big issue, and hopefully it will prompt Congress to take action,” he said.

‘That is going to be a tough fight’

The process of crafting and filing the waiver is expected to begin within weeks, but it could take months or longer for the federal government to approve the changes, if it does, said Clyde Reese, the head of the state Department of Community Health.

“It allows us the flexibility to see if we want to look at different ways of providing care to our members,” Reese said. “Anything that Georgia might consider doing in the future, the 1115 waiver would be necessary.”

Texas and Georgia have the highest rates of uninsured residents in the country, according to a Gallup survey earlier this year. Georgia’s Medicaid currently provides health care to 1.8 million poor children, pregnant women, the elderly and the disabled. It does not cover most single adults.

State Rep. Terry England, who chairs the House’s budget-writing committee, said the waiver could be used to help Grady and rural hospitals set up what’s known as a hub-and-spoke model. That would enable smaller hospitals to scale back their services and direct more patients to Grady and other larger regional hospitals.

But England, too, said the chances of Medicaid expansion are remote.

“Anything that would tinker with Medicaid expansion would have to go through the General Assembly, and that is still going to be a tough fight,” he said. “I don’t see that changing for a long time.”

‘The state could actually save money’

A growing number of reds states are pursuing nontraditional, market-driven ways to grow Medicaid — providing health coverage to millions of Americans and reaping billions of new dollars in federal funding in the process.

Arkansas uses Medicaid dollars to buy private insurance for the poor. Iowa requires some recipients to pay monthly premiums, which can be reduced by healthy behavior. In Indiana, some people have to contribute to a type of health savings account.

In Georgia, expansion would not only extend health coverage to roughly 600,000 poor Georgians but also bring in an estimated $35 billion in new federal funding over a decade, said Bill Custer, a health policy expert at Georgia State University. It would also create more than 50,000 jobs, many of them high-paying positions in the health care field, Custer said.

“The state could actually save money,” Custer said. “I would not be surprised at all if Georgia expanded Medicaid sooner rather than later because the economics are so compelling.”

Meanwhile, states that ask the federal government for more Medicaid money while still refusing to expand will likely be out of luck, experts say. Florida, which has not expanded, has already run into that problem. The Obama administration recently rejected the state’s request to extend uncompensated care funds for hospitals because those uninsured patients would be eligible under expansion.

The feds do not want to give states money for uncompensated care for people who could instead be covered through Medicaid expansion, said Joan Alker, head of Georgetown University’s Center for Children and Families. Being on Medicaid would mean that people have insurance and have the access to primary and preventive care that comes with it, she said.

“We don’t want these people to end up in the hospital and then have the taxpayer cover their costs when their conditions have worsened,” Alker said. By not giving hospitals more money for uncompensated care but not giving people insurance, “that’s just putting a Band-aid on the problem.”

By Greg Bluestein and Misty Williams, Atlanta Journal-Constitution May 7, 2015