Imagine walking into an emergency room with an awful rash and waiting hours to see a doctor until, finally, a physician who doesn’t have specific knowledge of your condition gives you an ointment and a referral to a dermatologist.

That could change if a technological device like Google Glass, which is a wearable computer that is smaller than an ink pen and includes a camera function, could be strapped to an emergency room doctor’s head or to his or her eyeglasses and used to beam a specialist in to see patients at the bedside. Not only would a patient get a more specific initial diagnosis and treatment, but a second visit to a dermatologist might not be necessary. 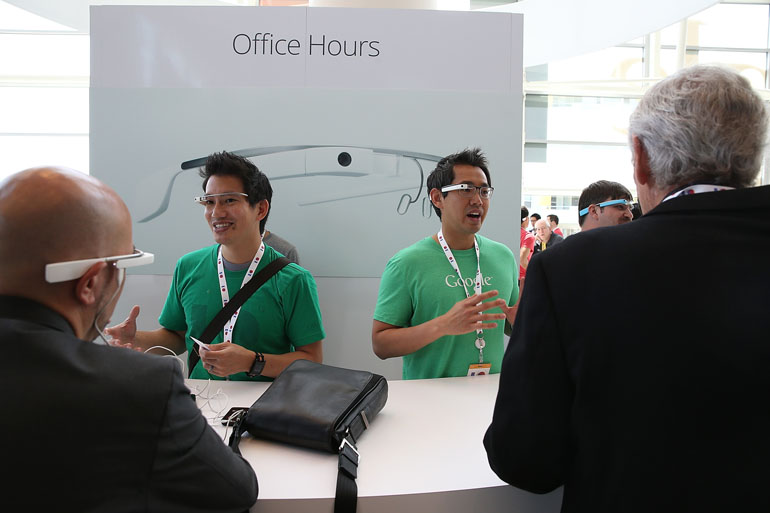 Google engineers do demonstrations of Google Glass during a conference on in May 2013 in San Francisco. (Photo by Justin Sullivan/Getty Images)

Researchers did just this for a small sample of people at the emergency room of the Rhode Island Hospital in Providence. They found during the course of the study that 93.5 percent of patients who were seen with a skin problem liked the experience, and 96.8 percent were confident in the accuracy of the video equipment and that their privacy was protected.

“There had been a lot of talk about using Glass in health care, but at the time that we designed the study, no one had actually tried it. No one knew if it would work,” said Megan Ranney, a study author and assistant professor of emergency medicine and policy at Brown University.

ER doctors normally have to page an on-call specialist – in the study, a dermatologist — to talk through the patient’s condition. With that information, the dermatologist makes a judgment call about the treatment, usually without ever seeing the patient. If there’s no dermatologist available, which can frequently be the situation, doctors do what they can but then refer the patient for follow-up dermatological care. Many rural and community hospitals do not have dermatologists on staff and it’s up to the emergency physician to care for the patient.

In the study, researchers instead had the physicians connect via Google Glass, enabling the specialist to see on his or her office iPad or computer what the ER doctor was seeing in person. The ER doctor was able to communicate with the dermatologist, and both physicians could ask questions of the patient in real time.

“You’ve rolled the first and second visit into this one visit. You have the specialist at the bedside, and if you get better, you don’t need to have follow-up,” said Paul Porter, a physician in the emergency department of Rhode Island Hospital and study author. “There’s nothing more frustrating [for the patient than] to be seen, leave with diagnostic uncertainty, and have to go somewhere else. … People don’t want that answer.”

Emergency rooms across the country may already use telemedicine technology for patients with skin or other visible conditions, but many of those machines can cost as much as to $60,000 — not to mention the expense of maintenance and support. Google Glass costs less than $2,000.

In addition, many ERs either don’t have the funds to obtain a telemedicine “cart,” or don’t use it because the size – four to six square feet – can be too large for that setting, said Edward Boyer, a professor of emergency medicine at the University of Massachusetts Medical School in Worcester, Mass.

“The crowding in emergency rooms means we physically do not have enough room to manage the patients they have in them. A dermatology cart is not a little thing, and a lot of ERs don’t have that much spare room to store and wheel around one of those things,” said Boyer.

The researchers’ next step is to study whether Google Glass or similar headset technology could be used for other ER patients, such as those showing signs of stroke or who may have been exposed to poison.

In the latter instances, poison control center toxicologists are always available, though mainly consulted via the telephone. But these patients commonly have visual symptoms such as seizures, said Peter Chai, a lead author and fellow in medical toxicology at the University of Massachusetts Medical School. And, if a person is severely ill due to poisoning, they are flown via helicopter to the closest major hospital, he added.

“If we could see them virtually, could we save the money of transport, keep them in the community intensive care unit, and give better patient care?” Chai said, noting that even if ERs in smaller or rural settings don’t have access to telemedicine, they may be able to afford this type of device.

The research surveyed 31 people with skin conditions in the Rhode Island Hospital emergency department for six months, and was published as a research letter in JAMA Dermatology April 15. Google Glass is currently not available commercially, but health care providers can get the device through health care technology companies.