A group of Republican doctors, nurses and dentists in the House is inserting itself into the contentious Medicare overhaul debate that so far has been dominated by Budget Committee chairman Paul Ryan. 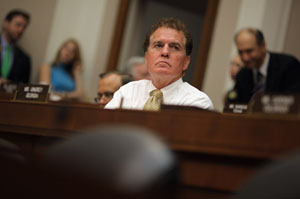 The 21-member House GOP Doctors Caucus is sending letters Friday asking 50 economists and health care experts across the political spectrum for their ideas about how to “save” Medicare.

It’s not that the group dislikes the Medicare plan that Ryan, R-Wis., unveiled as part of his 2013 budget proposal this week. “At first blush I’m in favor of it,” said Rep. Phil Gingrey, R-Ga., an OB-GYN who co-chairs the 21 member House GOP Doctors Caucus with Rep. Tim Murphy, R-Pa., a child psychologist.

“What Paul Ryan and the budget committee have done, and the work he has done with [Sen. Ron Wyden, D-Ore.] is excellent. But in and of itself it is not enough,” he said in an interview. Gingrey said that Ryan’s plan doesn’t reduce costs enough to ensure the program’s financial sustainability into the future. “It’s going to take more than that.”

When it comes to overhauling Medicare, all eyes have been on Ryan and his controversial proposals to convert Medicare from a system that covers a defined set of benefits, no matter the cost, to a premium support model that would provide a set amount of money for future Medicare beneficiaries – those currently under the age of 55. They would purchase either a private health plan or the traditional government-administered program through a newly created Medicare exchange.

The caucus is hoping that the appeal it launched Friday will not only draw new ideas for lowering costs but also find some common ground to achieve the kind of broad bipartisan support that Ryan’s plan doesn’t have – without trying to big foot GOP leaders. “We’re not trying to trump them,” said Gingrey. “Only with them will we be able to work across the aisle.”

The letters went to individuals at such conservative and free-market organizations as the Heritage Foundation, Cato Institute and 60 Plus Association, and to liberal groups including the Center on Budget and Policy Priorities and the National Committee to Preserve Social Security and Medicare. “They are the experts,” said Gingrey, noting that letters also went to Peter Orszag and Ezekiel Emanuel, both former Obama administration officials; Donna Shalala, secretary of Health and Human Services under President Clinton, and Mark McClellan, a former Medicare administrator under President George W. Bush.

Congress is unlikely to consider legislation to overhaul Medicare until a new Congress – and possibly a new president – are seated in 2013. It is expected to return to Washington after the election, but only to consider major deficit reduction legislation. If lawmakers fail to reach agreement, automatic spending decreases will take effect starting in 2013, and Medicare spending would be cut by 2 percent – all from payments to hospitals and other care providers.

But the caucus is laying the groundwork now to expand Ryan’s efforts, and win some bipartisan backing in both the House and the Senate.

Members of the caucus may not have Ryan’s clout, but several of its members are well-placed on committees. Gingrey, Murphy and Rep. Michael Burgess, R-Texas, another OB-GYN, serve on the Energy and Commerce Committee, which has limited jurisdiction over Medicare issues. Rep. Tom Price, R-Ga., an orthopedic surgeon, is chairman of the Republican Policy Committee, a GOP leadership position, and serves on the Ways and Means Committee, which has primary jurisdiction over Medicare.

The caucus’ agenda is two-pronged. First, it wants a wide array of interest groups and members of Congress to join its chorus that Medicare needs saving. Beyond that, it plans to craft a bipartisan Medicare blueprint that it hopes can serve as a serious discussion point for restructuring the program after the November elections.

In the letter, the caucus invited recipients to “join us in publicly urging all politicians and stakeholders alike to acknowledge the looming insolvency of Medicare.” While Democrats and seniors advocates have become increasingly open to making changes to Medicare to ensure its fiscal sustainability, they have resisted major structural changes.

“Those politicians and special interest groups who are entrenched in the status quo, unfortunately, have used scare tactics for far too long to prevent a responsible conversation from taking place,” according to the letter. “This demagoguery must end.”

Although Gingrey did not go as far as endorsing Ryan’s Medicare plan this week, he said in an interview he was “encouraged that it includes a plan to save Medicare, something the Democrat detractors of the Ryan plan have yet to articulate.”

The letter said caucus members were alarmed about estimates that the program’s Hospital Insurance Trust Fund could run out of money as early as 2016, and argued that restructuring Medicare could not move forward without shared acknowledgment of the magnitude of the problem.

The caucus in February initiated a private meeting with the seniors group AARP, and urged its leaders to make the point to its audience of 37 million members.

Against a backdrop of proposals to overhaul the popular social insurance program and a presidential campaign likely to address entitlement spending, AARP this week kicked off “probably the biggest outreach effort we’ve ever done on any issue” to activate older Americans, said Nancy LeaMond, AARP’s executive vice president.

While Gingrey said that AARP leaders agreed to meet again, he also suggested that the two are starting from different places. “I was a little concerned when they emphasized preserving the legacy program as it is,” he said, arguing that maintaining the status quo would lead to insolvency.

When asked whether AARP would be working with the caucus, Joyce Rogers, vice president for government affairs, indicated that the group’s first role moving forward would be to deliver seniors’ messages to Congress. “We’re sponsoring town hall meetings, community conversations, bus tours and debates in all 50 states and taking what we hear directly to Congress and the presidential candidates so they know what Americans think about how different proposals would impact them and their families,” she said.