Sandra Grooms recently got a call from her oncologist’s office. The chemotherapy drugs he wanted to use on her metastatic breast cancer were covered by her health plan, with one catch: Her share of the cost would be $976 for each 14-day supply of the two pills. 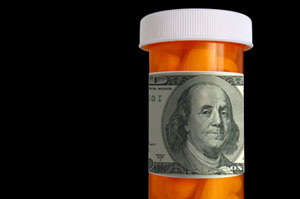 “I said, ‘I can’t afford it,’ ” said Grooms, 52, who is insured through her job as a general manager at a janitorial supply company in Augusta, Ga. “I was very upset.”

Even with insurance, some patients are struggling to pay for prescription drugs for conditions such as cancer, arthritis, multiple sclerosis or HIV/AIDS, as insurers and employers shift more of the cost of high-priced pharmaceuticals to the patients who take them.

Increasingly, health plans – even those offered to people with job-based coverage–require hefty payments by patients like Grooms.  In some plans, patients must pay 20 to 40 percent or more of the total cost of medications that insurers deem to be specialty drugs and place in the highest tiers of patient cost sharing. There is a limit: Most health plans have an out of pocket maximum, which is often several thousand dollars.

The trend is controversial, prompting a civil rights complaint in Florida, legislative action in a few states and debate over how to slow the rapid rise of spending on prescription drugs without hurting consumers or stifling development of new treatments.

Proponents say the high-priced drug tiers encourage patients to select lower-cost medications, just as similar efforts in the past decade led to a dramatic rise in the use of lower-cost generics.

In some cases, drugs placed in the highest tiers have equally effective alternatives that are in a lower cost tier, he said, adding that high drug prices have spurred the use of specialty tiers: “If a drug maker is concerned that its treatment is on a higher tier than they would like, the solution is to lower the price.”

Skeptics say it remains unproven whether requiring consumers to pay more will actually result in lower overall medical costs.  Many patients facing life-threatening diseases will choose the expensive drugs anyway, some studies have shown, even if there is a less pricey alternative.

Meanwhile, some patient advocates fear such payments are simply a way for insurers to skirt the health law’s rules requiring them to accept all enrollees, including those with medical conditions. While not rejecting anyone, they can discourage patients with health problems from enrolling if they set high payments for drugs for specific medical conditions.

“We will wind up with a race to the bottom where plans will design benefits to shift the greatest burden of cost to those with the greatest health needs,” said Wayne Turner, staff attorney at the National Health Law Program, which advocates for low-income individuals.

Along with another advocacy group, the AIDS Institute, the law program has filed an administrative complaint with the Department of Health and Human Services’ Office For Civil Rights, focused on four Florida insurers that put all HIV/AIDS drugs, including generics, into a category with the highest patient cost sharing.

“This amounts to discrimination based on disability,” said Turner, something federal law prohibits.

For Grooms, a solution came when her oncologist selected a different drug – an intravenous medication – for which her share of the cost is $100 a month.

While she’s relieved, she said requiring huge payments by consumers sharply affects “middle class people who are working and trying to make a living, even though they may be living with a serious illness.”

Driving the increasing use of such drug tiers and other cost-control efforts are a growing number of high-priced treatments that offer the hope of curing or managing debilitating diseases.

A new Hepatitis C drug, for example, costs $84,000 per 12-week treatment, and the average cost of brand-name cancer drugs has doubled to $10,000 for a month’s supply in the past decade, according to a May report from the IMS Institute for Healthcare Informatics. Drugs for severe arthritis and multiple sclerosis can costs tens of thousands per year.

Responding to the increased use of such drugs and their rising prices, employers and insurers have changed their policies. Many already require patients to first try other drugs before moving to specialty medications, a practice called “step therapy.” About 20 percent of workers insured through their jobs – and many of those who buy their own insurance through the new federal health law – have multiple tiers of drug-payment categories, with patient costs going up in each consecutive tier.

Insurers often place into the higher tiers specialty drugs, which have no standard industry definition, but are generally the most expensive products. Many do not have lower cost alternatives.

Ninety-one percent of 600 insurance plans sold to individuals through the new health law marketplaces this year had four or more tiers, according to a study by Avalere Health, a private research firm. It produced the report last December for the pharmaceutical industry’s lobbying group.

In addition, more than 60 percent of the most popular level of coverage purchased through those markets, the silver-level plans, place all medications for multiple sclerosis, rheumatoid arthritis, Crohn’s disease and certain cancers in their highest-cost sharing tier, according to an Avalere report this year.

“The plans definitely think it’s a way to contain costs by shifting them to consumers,” said Caroline Pearson, vice president of Avalere.

Advocacy groups for patients are urging some states and Congress to cap how much workers would have to pay.

“Is it fair that because you need that type of benefit that you have to pay that much more out of pocket than someone else?” asks Kim Calder, director of health policy at the National Multiple Sclerosis Society.

Calder said it would be better to spread the cost of such drugs to everyone through increases in premiums.

Lawmakers in nine states have debated ways to limit the consumer costs, but only three have passed legislation. Delaware, Louisiana and Maryland each cap the out-of-pocket cost of specialty-tier drugs at a maximum of $150 for a 30-day supply, according to a report by researchers at the Georgetown Health Policy Institute.

But the effect on overall consumer costs is uncertain.  Capping monthly costs for prescriptions could simply lead insurers to raise premiums or the annual deductibles, the amounts consumers pay before most coverage kicks in.

Looking For An Alternative

Even as new specialty treatments offer promise for many patients, they pose a dilemma for benefit administrators like Judith Muck, executive director of the Missouri Consolidated Health Care Plan.

Specialty drugs account for only 1 percent of all prescriptions filled by the nearly 100,000 state workers and retirees covered by the plan, but they accounted for 28 percent — $66 million — of drug spending over a recent 18-month period.

“Specialty drugs are life changing for individuals who take them and can be life-saving,” says Muck. “Our goal is to find a way to pay for them.”

Muck rejected the idea of creating a specialty tier in the plan’s drug benefit. Instead, the plan is considering options including treating some patients needing high-priced intravenous drugs at doctors’ offices rather than more expensive hospitals, which could save $428,000 a year, and negotiating with hospitals that charge higher-than-average prices, which could save $400,000 a year.

Other insurers are trying different methods. WellPoint, one of the nation’s largest insurers, will pay oncologists a bonus of $350 a month per patient for sticking with specific chemotherapy regimens.  Florida Blue has created cancer-specific “accountable care organizations” that reward doctors if the new organizations save money while hitting quality targets.

While some critics of the drug industry have called for more direct government influence on prices drug makers can charge, that idea is still seen as a political nonstarter.

“At the end of the day, that undermines innovation,” said Bradford Hirsch, an adjunct professor at Duke Medical School and medical director at the health economics and outcomes division of U.S. Oncology, a network of cancer treatment centers.

Clarification: This story was updated to say that WellPoint’s bonus program for oncologists is not based solely on the cost of the drugs. As originally written, the story said the oncologists were paid the bonus for sticking with less costly regimens.

Also, the  was updated to add a reference to insurance plans’ maximum out-of-pocket limits.

Got Insurance? You Still May Pay A Steep Price For Prescriptions