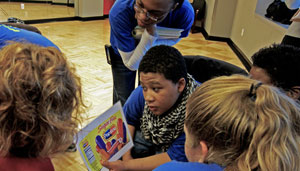 Vanessa Emmanuel looks on as Joshua March and Brianna Angers examine the food label on a box of sugar-free popsicles as part of the MEND program. (Michelle Hirsch/The Fiscal Times)

In southeast Washington last month, Vanessa Emmanuel passed out laminated copies of food packages to members of four families who gathered at the Salvation Army building, part of a community-based program to combat childhood obesity. Such efforts are crucial to the nation’s fiscal health as medical spending for chronic diseases including diabetes, arthritis and heart disease threatens to overrun the health system. If current trends continue, obesity related health care costs are projected by one study to reach $344 billion by 2018, with direct expenditures making up 21 percent of total health care spending.

After describing at length different food rating systems and potentially misleading advertising on packages, the energetic “nutrition leader” scoured each product’s nutrition label for unsuitable levels of sugar and fat. The parents and children divided the labels into two piles, those that were acceptable and those that weren’t. While many of the judgments were obvious (fried chicken nuggets, not acceptable), some were less so. A box of granola bars advertised as low fat and organic didn’t make the cut. Neither did Weight Watchers’ chocolate cake. Both had too much sugar. But a bag of baked tortilla chips was okay, causing the group to cheer.

The four mothers and their pre-teen children are participating in a pilot project for the MEND program – Mind, Exercise, Nutrition Do It!  Started in Great Britain, the program provides nutrition education, coping strategies and exercise opportunities for parents and overweight kids and is being offered in select areas in the United States in partnership with the YMCA. Emmanuel works for FitFamily, a childhood obesity prevention and management program at Children’s National Medical Center, and was trained by MEND personnel.

The program is making a difference. “I bought more fruit and vegetables in the last few months than I ever have,” said MEND mother Shermell Smith of Washington. Smith joined the program to help herself and her 8-year-old daughter Chiyan. “I just want to get us both healthy and get us physically fit as well.”

Goal setting, education and motivation techniques provided by the program have helped Smith and her family. “I make sure I put healthy at the forefront whereas before I would just go grocery shopping and it just didn’t matter as long as we had food in the house,” she said. Although Smith is committed to the change, she did initially get some resistance from other family members. “My husband said, ‘Where’s the fat people food?’ And I said, ‘Well, you have to eat what we eat now.'” Smith said her husband came around when he saw the family’s eating habits improve. The program, she said, “shows you a different way of starting to turn your usual life into a healthy life.”

Efforts to alter a modern lifestyle too dependent on processed foods, video entertainment and physically effortless transportation increasingly are being supported by the federal government. First Lady Michelle Obama is championing childhood physical activity and expanded access to healthy food. In other efforts, the Department of Health and Human Services is in the process of issuing $650 million in American Recovery and Reinvestment Act grants to transform communities for healthier living through state and local policy changes that support physical activity, better nutrition and smoking cessation. Additional funding would be available through a $7 billion prevention and public health fund included in the health care legislation passed Sunday evening.

Yet much of what can be done to control chronic conditions lies outside the medical arena. The tricky part is figuring out how to tackle it, experts say. “You can talk to people about healthy eating and physical activity but if they don’t have the environment that supports it, it’s extremely difficult for them to change their behavior,” said Wayne Giles, acting deputy director for the Centers for Disease Control and Prevention’s National Center for Chronic Disease Prevention and Health Promotion. Creating that environment is the focus of the Recovery Act grants. Each state and territory received a portion of a $119 million pool Feb. 5 to institute statewide policies that promote healthy living. Policies considered effective include improving nutrition in schools through better lunches and reducing access to sugar laden snacks and beverages; providing incentives to increase neighborhood access to food stores stocking fruits and vegetables; requiring new developments to include sidewalks and bike lanes, and ensuring safe environments for people to exercise. An additional $372 million was distributed to 44 communities on March 19. Remaining funding supports national organizations focused on community health, media campaigns and disease self-management programs.

The community approach is heartily endorsed by public health advocates. Many see the chronic disease epidemic as the result of multiple changes to the social structure occurring over the last several decades. Reshaping the trend will require a multifaceted, local approach. “It won’t be a single policy or a single program that’s going to reverse the epidemic but it’s going to have to be all of us across our society saying what do we contribute and what can we do to change it,” said James Marks, senior vice president and director of the Health Group for the Robert Wood Johnson Foundation, a philanthropy focused on improving health care.

“To me, the community is exactly the right place to approach this,” agreed James Hill, director of the Center for Human Nutrition at the University of Colorado at Denver. Not only can localities provide the opportunities to improve health, but also offer another important aspect of behavior change – motivation. The key, he added, is to create a local environment where “you’re doing it because everybody else is doing it and you feel bad if you’re not doing it.”

That point is not lost on Shermell Smith, who recognizes that changing her self- described poor eating habits is essential to modeling a healthier life for her daughter. “If she sees me do it, she says, ‘Momma’s changing for a reason,’ instead of [me] just saying ‘No you can’t eat that,’ but I’m sitting with a big bag of Doritos myself.”