To partner with the federal government or not. That is the question facing many of the nation’s governors as crunch time approaches to carry out the 2010 health care law.

Their decisions about whether to set up state-run online markets to offer health insurance will affect whether millions of individual consumers and small businesses shop for coverage on state or federally operated websites starting in 2014. 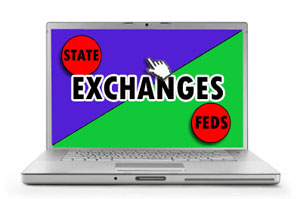 Consumers are likely to see some differences – possibly around the number of insurers offering plans, the scope of coverage and the marketing campaigns to persuade people to enroll.

State officials have three choices: Set up the markets themselves, which enables them to retain some control over state insurance matters. Help the federal government run the markets, also called exchanges. Or let federal regulators do it all.

The online markets have been likened to websites like Expedia or Travelocity where travelers shop for airline tickets, but in actuality, they will be more complex. State or federal officials running them must decide which health plans are offered and what benefits are covered. They’re required to operate toll-free hotlines to help consumers choose a plan, determine eligibility for federal subsidies or Medicaid, rate plans based on quality and price and conduct outreach and education.

So far, 18 states have said they will run state-based markets. Six are planning to partner with the federal government to operate some functions.  The remaining states are either undecided or will default to a federal market.

Proponents of state control say the first two choices allow states to retain some authority over how the markets, also called exchanges, will operate.  Opponents, such as Arizona Gov. Jan Brewer and New Jersey Gov. Chris Christie, both Republican, counter that the law gives states “little actual authority” over the exchanges even if they run them and they lack information about the alternatives.

“I will not ask New Jerseyans to commit today to a state-based exchange when the federal government cannot tell us what it will cost, how that cost compares to other options and how much control they will give the states over this option that comes at the cost of our state’s taxpayers,” Christie said in a statement Thursday, which he elaborated later on The Daily Show.

With time running short for decisions — the markets are slated to open for enrollment next fall, with coverage to take effect Jan. 1, 2014 — here are some of the political, economic and policy factors being weighed by governors.

Q: Why are exchanges controversial?

A: Historically, insurance exchanges have had both conservative and liberal support. Conservatives, including the Heritage Foundation, endorsed the idea of market-based exchanges as a way to promote competition among insurers, which would benefit individuals who buy their own coverage as well as employers who offer policies to their workers.

Heritage supported the exchange opened in 2006 in Massachusetts under Gov. Mitt Romney, which is a model for the federal law.  Conservatives have also generally supported the idea that states would retain regulatory control.

When the current law was under debate in Congress, political moderates, insurers, state regulators and states-rights supporters backed the Senate version, which envisioned state-run markets. A House version called for a single national marketplace, which was preferred by liberals.

In the end, the Senate version became law in 2010 – but without the vote of a single Republican.  As a result, few GOP governors wanted to be seen as supporting it, or moving forward on creating state-based insurance markets. Many waited until after the Supreme Court decision or the November elections before deciding which way to go – leaving insufficient time to build a state-based market if they had not already made some preparations.

Some continue to believe that nonparticipation “will cause this program to fail,” Kansas’s elected insurance commissioner, Republican Sandy Praeger, told Politico Nov. 30.

Realistically, she added, “the state option is a much more conservative approach.”

Q: What will be the difference to consumers between a state and federal exchange?

A: In broad details, they should work the same way.  Consumers shopping in either type of exchange will choose among insurer offerings that are standardized into four coverage levels, bronze, silver, gold and platinum, along with a young adults plan.  Rules on how much insurers can vary premiums based on age or geography are set in the federal law, although states could adopt rules making them stricter.

Differences between federal and state exchanges are likely to be subtle, but important to some consumers. States that do their own exchanges, for example, can decide which insurers participate and whether to require benefits beyond those set under federal law. They can accept all insurers whose policies meet the law’s requirements, for instance, or limit participation by requiring that insurers meet specific quality or pricing guidelines.

States may also be more proactive in selecting insurers that offer benefits targeted to a state’s particular needs. For example, a state with a high rate of diabetes might select insurers with special programs to combat diabetes.

There is also concern that lack of cooperation by some states could make it harder for the federal exchanges to enroll people in coverage.

Q: What additional controls do states have that run their own exchanges?

A: States that run their own exchanges can decide what advertising campaigns will work best to get people to enroll, a function that many believe will be handled better at the local level

Getting large numbers of people to enroll – particularly the young and healthy – could help moderate premium increases, making marketing integral in the success of the exchanges.

“There’s a lot of flexibility with regard to how you select plans, design benefits and how you do outreach and promotion: Every one of those elements can be better done on the ground in the state,” said Peter Lee, the executive director of California’s exchange, which expects its outreach campaign to be conducted in at least 13 different languages.

Q: How much will the marketplaces cost and who will pay for them?

A: The federal government has awarded $2 billion to the states to help them build the exchanges. By law, the markets must be self-sustaining after 2015.

States that run exchanges can cover the costs in a variety of ways, but most are expected to impose a 2 to 4 percent surcharge on insurance plan premiums, which will be passed onto consumers.  In California, the surcharge will be only on those plans sold through the exchanges, while other states may impose the fee on all policies sold.

Financing the federally run exchanges will work the same way — with a 3.5 percent premium surcharge  in the first year, according to proposed regulations.

Opponents of exchanges say these costs will translate into higher premiums that could put coverage out of reach for some consumers.  Supporters say that more than half of those buying policies in the exchanges will be eligible for federal subsidies, and that added competition will work to keep costs down.

Q: Are there legal disputes over the difference between the state and federal exchanges?

A: Some conservatives argue the federal law allows consumer subsidies only through state-run exchanges.  In May, however, the Internal Revenue Service ruled that the subsidies can be granted through either state or federal exchanges – a decision which has been challenged by the state of Oklahoma.

Such a challenge, if successful, could mean that subsidies would not be available in a federally run exchange. “If the courts read the plain words of the statute, then federal exchanges couldn’t really function … (and) thus states that refuse to create their own exchanges would effectively be repealing a large part of the law,” wrote James Capretta of the conservative American Enterprise Institute and Yuval Levin, editor of National Affairs, in a recent opinion piece in the Wall Street Journal.

The U.S. Justice Department has asked the courts to dismiss the case, saying Oklahoma has no standing to bring the challenge.

Q: Can a state that initially chooses a federal exchange later do its own?

A: Yes, the law says that states can choose to build an exchange in later years.  States would have to get certified by the federal government to prove they have all the necessary pieces in place.  There is a risk those requirements could get tougher in future years, but some believe there also could be some advantage in waiting. If the launch of the exchanges in 2014 is beset by problems, then governors and lawmakers can blame the federal government.  “You don’t hold the risk that way,” said Amy Lischko, an associate professor at Tufts University School of Medicine.

Q: Are there any other options for states?

A: Yes, the federal government has given states until Feb. 15 to decide if they would rather do a partnership with the federal government.  That would allow states to retain some regulatory control, such as certifying and choosing the plans selected for the exchange and running consumer assistance efforts.

Q: Do insurers prefer a state-run market or a federal exchange?

A: Most insurers say they plan to offer policies in both. A federal exchange may provide some benefit to insurers who sell in many states, because the rules will likely be standard. But when pressed, insurers tend to favor state-based exchanges, mainly because they have established relationships with state regulators.  They worry a federal exchange may have a single regulator dealing with several states, which may not “be able to work with you or understand how your market works, as compared with a local regulator,” said Doug Gray, executive director of the Virginia Association of Health Plans.

Insurers also prefer the open market model like that in Colorado, where all plans that meet minimum requirements can participate. “Insurers want to be able to compete and don’t want to be excluded from the get go. If you’re an insurer and you see these models, you will favor Colorado’s,” said Gray.