John Haupert is five months into one of the toughest jobs in health care: president and CEO of Grady Health System in Atlanta. But he is no stranger to such challenges—his last job was as the chief operating officer of the embattled Parkland Health and Hospital System in Dallas. 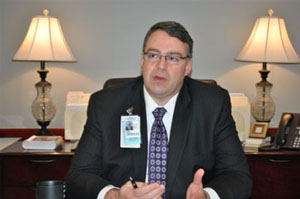 Grady Memorial Hospital is the biggest safety-net hospital in Georgia, treating many low-income and uninsured patients from Atlanta and around the state. It ended 2011 with a loss of about $25 million, Haupert says, and has trimmed staff and found other ways to cut costs. It also faces significant reductions in funding from federal, state and local programs. In addition, in the past few months, the hospital came under federal inspection after a patient fell to her death from a hospital window.

Still, thanks to philanthropy, Grady has made significant capital investments since the hospital was at the brink of collapse three years ago. In October, it opened the new Marcus Trauma Center.

Haupert spoke recently with Andy Miller of Georgia Health News. He talked about Grady’s financial status, potential Medicaid changes in Georgia, the health care overhaul and government funding, such as the disproportionate share (DSH) program for hospitals that serve a large number of low-income patients. His comments, edited for space, are reprinted here.

Q: Medicaid is a substantial portion of Grady’s revenue. Georgia is considering an enhanced managed care system for Medicaid to keep costs under control while improving health outcomes. What are your thoughts on that process?

A: We as a safety-net hospital will have trouble absorbing additional cuts in Medicaid payments. At the federal level, there’s a bill that would reduce payments [for hospital outpatient clinic visits] to what a physician is paid in their private office. That could potentially have a $4.6 million per year impact on us. The state issues have not had a dollar amount assigned to them, but you can assume there is potential for a negative impact.

Q: Any concerns about the proposal, in a state-commissioned report, to extend managed care to the aged, blind and disabled populations in Medicaid?

A: When you take a more high-risk, high-utilization population, and put them in managed care, there is a lot more [financial] risk for those who provide that care. Yes, I have concern about moving in that direction.

We are working with [Georgia’s Department of Community Health] on the issue of disproportionate share hospitals. Many years ago, a cap was placed on Grady’s potential DSH distribution. We would like to see that cap lifted.

In the state of Georgia, that threshold was set at 1 percent. So you have [these special funds] being spread to almost every hospital in the state. I have an ethical problem with [seeing] some high-net-income health systems benefiting from funds intended for hospitals that provide a disproportionate share of their care to the underserved and Medicaid populations.

We’re in discussions continually with Fulton and DeKalb counties [the counties in which Atlanta is located], which provide us funding from their budgets. We’re very fortunate that those counties have participated with us. But we have to have ongoing discussions with those counties about the cost of providing the care to their uninsured citizens.

We have to have a discussion, probably at the state level, about a broader range of accountability for providing care to the unfunded. There are a lot of counties other than Fulton and DeKalb that reap the benefit of Grady, [such as] the burn center, the trauma center, and now one of the leading neuroscience stroke centers in the country. If those counties have unfunded patients who are utilizing those services, there needs to be some way for Grady to receive reimbursement.

Q: So there needs to be some kind of broader funding?

A: At the state level — regional health networks that help fund the care for the uninsured.

Q: Is there a place in the U.S. that does that?

A: Not that I’m aware of. No one wants to have to pay more in taxes. Yet people do really need these services.

Q: There will be a Supreme Court decision this year on key provisions of the 2010 federal health law. If it’s upheld, how will it affect Grady and other safety-net hospitals?

A:  About 36 million of the uninsured all of a sudden will have coverage. There will be a group of patients who have always seen Grady [or another safety-net hospital] as their hospital, and will want to retain that relationship.

I’m sure there will be patients who will feel more empowered with insurance to seek care elsewhere. Will there be enough primary care physicians and specialists to meet that pent-up demand? It’s an economic given that those who have been underserved and have that pent-up demand will be higher utilizers of service. We have a pretty significant physician shortage [in Georgia]. There may not be access.

Q: If health reform is struck down, what does that mean for the future of safety-net hospitals?

A: This country can’t afford for health care to continue to consume more and more of the gross domestic product. We have been in a system where hospitals and providers are paid for the volume of services, not on how well the service is provided, or the outcome with the patient. The focus needs to be on the health of the patient. If it doesn’t happen, and the economy doesn’t significantly turn around, the safety net will just keep getting bigger. We are seeing [patients] at Grady who never thought they’d be part of the safety net. They have lost their jobs or [their] health insurance.