ALBUQUERQUE — The man’s face was pasty, his eyes closed as he lay back in bed waiting for a wave of nausea to pass.  Dr. Elizabeth Ward bent over him after checking his temperature, blood pressure, and oxygen levels and finding that all were normal. 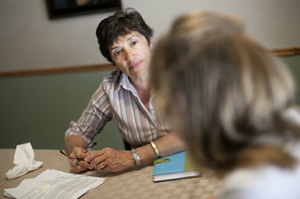 Physician Elizabeth Ward, a provider with Presbyterian Health Care System’s Hospital at Home program in Albuquerque, N.M., follows up with Pamela Blondin, whose husband is being treated daily for colitis. (Photo by Rick M. Scibelli for USA Today)

“Would you rather stay home or go to the hospital?” she asked Frank Blondin, 52, who suffers from severe rheumatoid arthritis and heart disease, and had a nasty diarrhea-inducing bacterial infection.

Soon, the doctor was managing a “hospital at home” admission for Blondin — an arrangement allowing him to receive intensive care and medical monitoring in the quiet of his own bedroom. Medical supplies and medications would be delivered as soon as possible, she told Blondin’s wife, Pamela.  A nurse would come within the hour, take laboratory samples, and return later that afternoon and in the days to come.  Ward would check in by phone, visit daily, and help would be available 24/7 if required.

“Hospital at home” programs fundamentally refashion care for chronically ill patients who have acute medical problems — testing traditional notions of how services should be delivered when people become seriously ill.  Only a handful of such initiatives exist, including the Albuquerque program, run by Presbyterian Healthcare Services, and programs in Portland, Ore., Honolulu, Boise, Idaho, and New Orleans offered through the Veterans Health Administration.

But the concept – which has been adopted in Australia, England, Israel and Canada — is getting attention here with increased pressure from the national health overhaul to improve the quality of medical care and lower costs. Hospital at home programs do both, according to research led by Dr. Bruce Leff, the director of geriatric health services research at Johns Hopkins School of Medicine in Baltimore who pioneered the concept.

In a study of three experimental hospital at home programs published in 2005 in the Annals of Internal Medicine, Leff demonstrated that patient outcomes were similar or better, satisfaction was higher and costs were 32 percent less than for traditional hospitalizations.

Excluded are patients who are medically unstable or who cannot be cared for adequately at home.  “The patient, the family, the nurse, the doctor and the referring physician all need to feel if it’s safe,” said Dr. Scott Mader, clinical director of rehabilitation and long-term care at the Portland VA Medical Center, which recently treated its 1,000th hospital at home patient. If patients take a turn for the worse, for instance developing chest pain, an ambulance is summoned to take them to the hospital.

‘It’s Going To Be Very Common’

In most programs, doctors examine the patient daily and nurses and aides come up to three times a day, often for an extended period.  Patients are admitted for three to five days after being seen in the emergency room, referred by a physician or discharged early from a hospital.

Last year, the Cochrane Collaboration, an international organization that evaluates the evidence supporting health care interventions, published a review of 10 randomized controlled studies on hospital at home programs; it found that 38 percent fewer patients in these programs had died after six months, compared to those who underwent traditional hospitalizations.

“Imagine if there was a pill that did that: everyone would want it,” Leff said.

“It’s a very successful model and in five years, I think it’s going to be very common.  But we’re still in the early adoption phase,” said Mark McClelland, an assistant professor at the Center for Health Care Quality at George Washington University.

Among current plans for hospital at home programs:

Resistance from Medicare and private insurers is the biggest problem these programs face.  Traditional fee-for-service Medicare does not pay for hospital at home services, although individual private Medicare Advantage plans may do so.  The Centers for Medicare and Medicaid Services “appears convinced it’s going to add to overall costs” and fearful that providers will admit patients inappropriately, said Erin Denholm, chief executive of Centura Health at Home, a division of Colorado’s Centura Health.

For physicians, “doing hospital-level services at home sounds scary” and “it’s a big jump” that they haven’t yet embraced, said McClelland.  Starting a program requires a considerable up-front investment of time and money, and it’s not a priority for many institutions distracted by the pressures of the national health overhaul, he said.  Indeed, keeping beds full is a financial mandate for most hospitals.

That may change as hospitals and doctors form new structures known as “accountable care organizations (ACOs)” that are promoted in the health care overhaul. ACOs call for providers to restructure how medical care is delivered while participating in the financial rewards and risks of those changes.

Because Presbyterian has control over how that health plan pays for services, it was able to start a hospital at home program in 2008 with a reliable funding base. As for the motivation, “We are never going to build enough bricks and mortar (institutions) to provide care for all the baby boomers and the elderly who will need it by 2030,” said Lesley Cryer, executive director of Presbyterian Home Healthcare. “So, we’ve got to find alternatives like this.”

On a recent morning in Albuquerque, Dr. Melanie Van Amsterdam, one of three doctors who provide hospital at home care for Presbyterian, stopped in to see Rosa Sota, 76, who had fallen on a doorstep, cut herself above her right eyebrow, and developed cellulitis.

Van Amsterdam set a chair in front of the older woman, who was lying on a couch in her small living room with a pinched expression.  The doctor did a careful examination, then explained the course of treatment she was ordering. 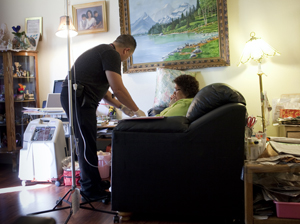 “It’s better in my house because if I need to eat, I don’t have to push a button. I can go to the kitchen for myself,” Sota said, as her husband Ruben nodded in agreement a few feet away. “And here I sleep better because you don’t have all the people coming and going and I don’t feel so nervous.”

For Frank Blondin, care began with a call for help from a home health nurse. Within an hour, Ward arrived, performed a thorough evaluation, obtained the patient’s consent for a hospital at home admission, and decided on a treatment for his main medical issues — dehydration and the infection. Then, Ward sat down to carefully review Blondin’s history and medications with his wife and explain that risks were slightly higher that complications would not be dealt with as quickly as in the hospital.

“Is that OK by you?” the doctor asked.

“I’m a little apprehensive because I’ve had to call 911 so many times for Frank,” Pamela Blondin admitted. “But he really wants to be home and I’d much rather have him here.  Even though there’s a bit of a fear factor, I have to tell you, I appreciate having the choice.”

Some Patients Can Choose To Be Hospitalized At Home