President Barack Obama Thursday once again nominated Marilyn Tavenner to head the Centers for Medicare & Medicaid Services, and a key GOP senator said the chamber should consider the nomination. 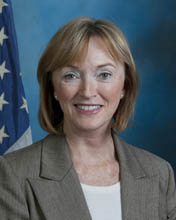 “The Senate should give Ms. Tavenner every opportunity to show she is a worthy choice to lead the agency responsible for Medicare, Medicaid, the Children’s Health Insurance Program, and a lot of the implementation of the Obama health care law,” said Sen. Charles Grassley, R-Iowa., who is a member of the Finance Committee and its former chairman and ranking member. Grassley said he hoped the panel would give Tavenner’s nomination “due consideration through regular order.”

Tavenner has been the agency’s acting administrator since December 2011. She has an extensive health background as a nurse, a health care official at both the state and federal level and a hospital chain executive.

Senate Republicans were not so open to Obama’s last Medicare nominee, Dr. Donald Berwick. In March 2011, 42 Senate Republicans pledged to block his nomination, citing past “controversial statements” and “general lack of experience managing an organization as large and complex as CMS” as concerns.  Berwick never got a Senate hearing and Obama appointed him to the CMS post in July 2010 during a congressional recess. That recess appointment ended in December 2011, and Obama announced he was nominating Tavenner, who had been Berwick’s deputy, for the job. The Senate never took up that nomination.

Sen. Orrin Hatch, R-Utah, the finance panel’s current ranking member, said in a statement that Tavenner “is smart and diligent” but added, “there are many questions she’ll need to fully answer before I decide whether or not to support her nomination.”

CMS, which oversees Medicare and Medicaid, has not had a Senate-confirmed administrator since 2006.  As the largest purchaser of health care in the world, with a budget of $820 billion, CMS pays for the care of one in three Americans and interacts daily with thousands of hospitals, doctors and other providers.

Consumer and health care provider groups moved quickly Thursday to support Tavenner’s nomination. Chip Kahn, president and chief executive officer of the Federation of American Hospitals, urged the Senate to confirm her. “Simply stated, she is the best-qualified person in the country to serve as CMS administrator based upon her outstanding leadership skills, exceptional knowledge of health policy and the health care industry, experience as a caregiver, and the qualities she already has demonstrated running CMS,” Kahn said in a statement.

Ron Pollack, executive director of Families USA, said Tavenner’s success as acting administrator “makes her exactly the right person to face the next round of challenges, overseeing the expansion of Medicaid and the establishment of state marketplaces, both of which are key provisions of the Affordable Care Act that are being implemented this year.”

Whatever happens with Tavenner’s nomination, Grassley said he hoped the Obama administration would avoid “the divisive, unconstitutional circumvention through recess appointment” as Obama did with Berwick.