In an unusual partnership, a nonprofit health plan that employs its own doctors is joining with a major Catholic hospital system in the Pacific Northwest to provide more efficient health care services to members of all health plans in the Spokane, Wash., area.

Seattle-based Group Health Cooperative and the 32-hospital Providence Health & Services announced Wednesday they have formed a joint venture to offer a single delivery network in Spokane to all health plans and employers that want to contract with them. 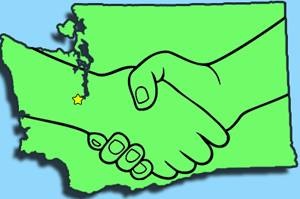 The goal is to expand Group Health’s patient-centered medical home model to the broader community and reduce preventable hospital readmissions and other wasteful services. The medical home model features primary care physicians leading a team of nurse practitioners and other professionals in providing for all the patients’ health care needs.

Physicians, hospitals, insurers and employers across the country are teaming up to try to control medical costs and improve quality of care through new models called accountable care organizations (ACOs). The Spokane collaboration resembles an ACO in that the partners will share responsibility for meeting cost and quality goals for insured patient groups. But it’s unique because a health plan’s staff physicians are involved.

While many joint ventures between hospitals and health plans failed in the 1980s and 1990s, they have a better chance of succeeding now because the players are more realistic about the need to control costs, said Peter Kongstvedt, a McLean, Va.-based health care consultant.

The new company will meld Group Health’s 119 primary care and specialty doctors and other professionals in 16 locations with Providence Medical Group’s 276 doctors and professionals, Providence Sacred Heart Medical Center & Children’s Hospital, and Holy Family Hospital into a single network. It will comprise nearly 40 percent of all doctors and advanced practitioners in Spokane.

This is the first time Group Health, a consumer-governed, staff-physician model HMO founded in 1947, with 660,000 members in Washington and Idaho, will make its physicians and clinics available to commercial subscribers of other health plans.

Providence officials hope the joint venture will enable their hospital system — Spokane’s largest, with 65 percent of the market — to position itself for an expected shift from fee-for-service payment to global payment for managing patients’ health. Both public and private insurers are moving in that direction. “This is part of Providence’s effort to move away from fee for service to payment for value and outcomes,” said Mike Wilson, head of the eastern region for Providence, which operates in five states in the Northwest.

Like other hospital systems, Providence bought many outpatient physician practices in Spokane over the past several years and is working to organize those doctors into a seamless delivery system with its hospitals. Group Health, with its long experience in working with physicians, is expected to help with that.

“Our experience is having an exceptional acute care system, and what Group Health brings is a strong historic program of managing care well in the outpatient world,” Wilson said.

Kongstvedt said the partnership could bring benefits to both sides. “It makes sense for Providence to look to Group Health to organize its doctors and manage issues of productivity and cost,” he said. “That’s something Group Health knows how to do, and that large hospital systems really underestimate.”

Group Health officials acknowledge that while the medical home approach in its staff-run, primary-care-oriented clinics has produced lower costs and higher patient satisfaction, the organization has struggled to achieve the same results working with independent doctors outside its clinics.

“What we’re trying to do [in this joint venture] is extend our model of care and achieve the same really good health and cost outcomes among the community of providers that aren’t necessarily working for Group Health,” said Mike Foley, a Group Health spokesman.

Providence has been Group Health’s main hospital partner. But Wilson says physician leaders from both organizations now will meet to design a more integrated system of care across primary, specialty, hospital, and post-hospital care. Providence physicians will switch to the same electronic health record system, Epic, used by Group Health, and Providence hospitals will follow soon after, he says.

Robb Miller, executive director of Compassion & Choices of Washington, a group that works with patients on end-of-life options including physician aid in dying (which is legal in Washington), said he hopes Group Health will take steps to protect patient choice in the new network, given that Providence doctors are required to follow Catholic religious directives governing reproductive and end-of-life care. Stanford said Group Health had not discussed that issue with Providence.