When Brett Geranen needed an eye exam he turned to the website you might choose to find cheap Thai food or a massage: Living Social.

Geranen, 41, had moved away from his regular optometrist and found a practice offering a $55 deal for an exam and credit toward eyewear. The Washington, D.C., resident said he’ll most likely go back to the same optometrist for his next exam. 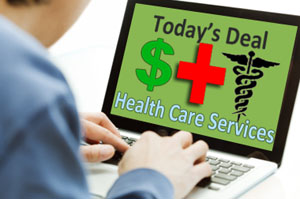 While most health-related deals on sites like Groupon and Living Social are for cosmetic procedures like Botox, providers also offer everyday medical, vision and dental services.

Health and medical deals make up about 5 to 10 percent of the online coupon industry, according to Unaiz Kabani, data product manager at Yipit, a service that aggregates companies’ daily deals. Groupon, the market leader, had about 115 million subscribers in 2011, which he says are mostly 20- to 40-year-old college-educated women. Living Social says it has about 70 million members.

Health providers often see good results after an initial offer, but the patients who come in for treatment frequently don’t return.

“When you’re looking at a demographic that’s young, where some may have insurance, some many not, they’re more inclined to be episodic,” said James Doulgeris, a health care business and marketing strategist at HCP Associates.

He said coupons are often the cheapest option for healthy people who may not need follow-up appointments. Even for those enrolled in a private insurance plan, the cost of using an online deal or a retail clinic may be less than seeing an in-network physician.

Dr. John Muney, head of AMG Medical Group, based in New York, said the company’s Groupon deals brought more than 1,000 people to AMG’s six clinics for cholesterol and blood sugar testing, and regular checkups, over the course of a year. Most of the new patients, he said, were low-income, uninsured or on high-deductible plans.

About 5 percent of Groupon customers signed up for a membership with AMG after redeeming their coupons – which Muney said is an underwhelming, but not surprising number.

“We use this to fill in the gaps,” Muney said, “and bring awareness to the programs.”

Muney has used Groupon to offer several, mostly identical deals throughout the past year — a common strategy. About 60 percent of all businesses offering online coupons make repeated offers, said Kabani.

Some medical providers have offered deals on different sites, with varying results. In May, Washington, D.C.-based Berkshire Family Dental offered a deal through Living Social, and in October tried something similar on Groupon.

Office manager Vera Eid noticed that the customers coming in with either coupon were “younger, more computer savvy” and often just needed a routine checkup. But Living Social produced significantly better results – bringing in 150 patients, compared to fewer than 50 patients so far from Groupon.

Eid said few of the patients sought continued treatment. The ones who did were mostly looking for other deals or specials.

Doulgeris said better marketing and service could help providers turn their clients into loyal patients. He suggested personalized customer service, follow-up calls and special discounts to entice coupon buyers to return. He also urged doctors to tailor their practices to the unique demographic of younger patients.

“If you use this as a strategy to bolster your private insurance mix, I think you’re going to be serving your practice very well,” Doulgeris said.