Not all hospital patients are alike. Some are harder to satisfy. Especially those who are admitted to hospitals in and around New York City, Chicago and sections of Florida. 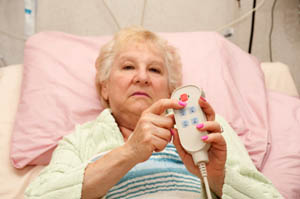 Patients in those regions of the country gave some of the lowest evaluations of their hospital stays, a Kaiser Health News analysis of Medicare data shows. Those surveys asked patients how well their doctors and nurses communicated, whether their pain was always well handled and whether their rooms were clean and quiet.

Out of 295 hospital markets, the ones with least satisfied patients were: Manhattan, the Bronx, and East Long Island, N.Y.; Newark and Paterson, N.J.; Takoma Park, Md.; Chicago; and Fort Myers and Ocala, Fla.

Hospitals are paying more attention to the surveys as Medicare prepares to use the results as one factor in deciding how much to reimburse hospitals. The new approach, part of the Affordable Care Act, pits hospital again hospital, with Medicare setting aside a portion of its regular payments and doling them out as bonuses.

Competing for every dollar is becoming increasingly important for hospitals, especially if the congressional super committee fails to reach a deficit-cutting deal, leading to an automatic 2 percent reduction in Medicare payments to providers.

New York has the hardest patients to please in the country, with its nationally known teaching hospitals, including NYU Langone Medical Center, NewYork-Presbyterian and the Mount Sinai Medical Center, faring worse on patient surveys than community hospitals in the Midwest that aren’t known beyond their towns.

No one has proof why New York does so poorly, but everyone has a theory. It could be all the old, cramped hospital buildings that make patients shack up in double rooms. It could be the cranky mix of lots of poor patients in especially bad health and wealthy, entitled patients. It could be the frenetic environment of teaching hospitals with a plethora of residents and specialists poking at patients.

Or it could be that New Yorkers are just grumpier and more willing to express it. “There’s a different cultural norm,” is the politic phrasing of Deirdre Mylod, a vice president at Press Ganey, one of the consulting firms that hospitals hire to help improve patient scores.

It’s no longer a just a matter of pride for Continuum administrators: Their annual bonuses are influenced by how the hospitals fare on patient experience surveys.