Despite federal regulations that prohibit health insurance plans from cherry-picking their beneficiaries, some Medicare Advantage plans may be doing just that, only indirectly. 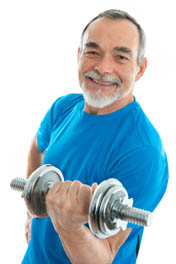 A new study from the New England Journal of Medicine suggests that when Medicare Advantage plans alter their benefits to include perks like gym memberships, they tend to attract healthier seniors. That may not be surprising, but Dr. Amal Trivedi, one of the co-authors of the study and a research investigator at the Providence VA Medical Center, says policymakers should take note of this trend, especially moving forward with the health care law.

“Ideally, plans should compete on the basis of their ability to improve quality of care and reduce costs,” he says, “rather than their ability to attract the healthy and exclude the sick.” He says that’s the rationale behind regulating health insurance markets. “[Lawmakers] should be aware that changes to the benefits plan have a big effect.”

The study used national figures from the Centers for Medicare and Medicaid Services to see what kind of changes occurred when 11 Medicare Advantage plans incorporated a gym membership as a part of their covered benefits. “Persons enrolling in plans after the addition of a fitness-membership benefit reported significantly better general health, fewer limitations in moderate activities, less difficulty walking,” according to the study.

But health plans may not be aware of this effect, and their rationale for incorporating gym membership could be unrelated to enrollment and retention of healthy patients. “We can’t look at why plans are doing this,” Trivedi says. The study suggests that perhaps “offering coverage for fitness-memberships may increase total market share, irrespective of the health profile of the plan’s population.”

Medicare Advantage plans, private or public, are not allowed to deny coverage to Medicare beneficiaries or employ strategies to attract healthier (and less costly) patients. The new health care law also extends these regulations to the individual and small-group health care markets. “But despite those regulations, plans can offer benefits that appeal to certain people,” Trivedi says. “It’s not excluding necessarily. It’s changing the benefits to appeal to the healthy.”