Two U.S. appeals courts Tuesday reached opposite conclusions about the legality of subsidies in the Affordable Care Act, a key part of the law that brings down the cost of coverage for millions of Americans.

In Washington, a three-judge panel at the U.S. Appeals Court for the D.C. Circuit ruled that the Internal Revenue Service lacked the authority to allow subsidies to be provided in exchanges not run by the states. 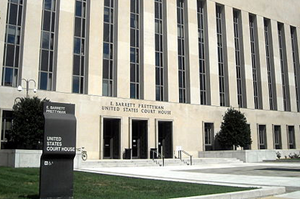 U.S. Court of Appeals building in Washington (Photo by AgnosticPreachersKid via Wikimedia Commons)

That 2-1 ruling in Halbig v. Burwell could put at risk the millions of people who bought insurance in the 36 states where these online insurance marketplaces are run by the federal government. Judge Thomas Griffith, writing the majority opinion, said they concluded “that the ACA unambiguously restricts” the subsidies to “exchanges ‘established by the state.’ “

But within hours, a unanimous three-judge panel for the Fourth Circuit in Richmond, Va., ruled exactly the other way in King v. Burwell – that Congress always intended to allow subsidies to be provided in both state and federally run exchanges.

“It is therefore clear that widely available tax credits are essential to fulfilling the Act’s primary goals and that Congress was aware of their importance when drafting the bill,” said the decision written by Judge Roger Gregory.

The Obama administration said it will appeal the Halbig decision. The Justice Department will ask the entire appeals court panel to review it, and that panel is dominated by judges appointed by Democrats, 7-4.

Similar cases are pending in lower courts elsewhere around the country, but the decision by the District of Columbia court is the first to suggest that subsidies being offered the federal exchange might be invalid.

Should the decision eventually stand, it could mean at least  5 million Americans would face an average premium increase of 76 percent, according to a projection done by the consulting firm Avalere Health.

The Obama administration said it is confident, however, that the ruling will be overturned.

“You don’t need a fancy legal degree to understand that Congress intended for every eligible American to have access to tax credits that would lower their health care costs, regardless of whether it was state officials or federal officials who were running the marketplace,” said White House spokesman Josh Earnest.

“We believe that this decision is incorrect, inconsistent with Congressional intent, different from previous rulings, and at odds with the goal of the law: to make health care affordable no matter where people live. The government will therefore immediately seek further review of the court’s decision,” said a statement from the Justice Department.

Meanwhile, Elizabeth Wydra, chief counsel for the Constitutional Accountability Center, said the ruling wouldn’t take effect right away. “The court’s rules are that it doesn’t happen for 45 days,” to give the government time to ask for a full en banc hearing, “or 7 days after the en banc hearing has been denied.”

Supporters and opponents of the health law were quick to react to the Halbig decision.

“There is no credible evidence in the record that Congress intended to condition subsidies on whether a State, as opposed to HHS, established the Exchange,” said Wydra, who wrote a brief on behalf of members of Congress who wrote the law. “Nor is there credible evidence that any State even considered the possibility that its taxpayers would be denied subsidies if the State opted to allow HHS to establish an Exchange on its behalf.”

Jonathan Adler, the law professor at Case Western Reserve University who helped craft the case, disagreed. “The heart of the decision today is a reaffirmation of the principle that the law is what Congress enacts, not what Congress wanted to enact or what some, with the benefit of hindsight, wish Congress had done differently,” he said.