Update, 11/5: The Board of Directors of Kaiser Foundation Hospitals and Health Plan named Bernard J. Tyson to be the next chairman and chief executive officer of the organization. Tyson will succeed current Chairman and CEO George Halvorson.

George C. Halvorson, the chairman and CEO of Kaiser Permanente — one of the nation’s largest not-for-profit health plans, has often said there is no better job in health care than his. But last month, he announced plans to retire. He’ll leave the post at the end of 2013 after overseeing the run-up to what he termed “the implementation day of the new act” – Jan. 1, 2014. It’s when a long list of major health law provisions takes effect. (Kaiser Health News is not affiliated with Kaiser Permanente.) 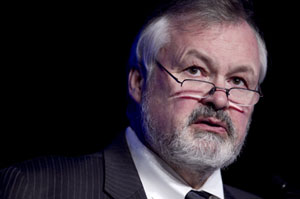 Preparing to participate in the law’s state-based insurance exchanges tops the list of implementation challenges Kaiser Permanente will face, Halvorson says. The exchanges are envisioned as online, one-stop-shopping hubs for consumers to obtain health insurance. If done right, he says, they will “create an opportunity” for individuals and small groups to choose among insurance plans. Key to success of the exchanges, Halvorson told KHN, is how well states do in getting people to enroll in coverage. If too few sign up, premiums could be high; conversely, large enrollments could help moderate costs going forward.

But that is also just one of many priorities for the year ahead. KHN’s Julie Appleby and Alvin Tran recently spoke with Halvorson about Kaiser Permanente’s plans to expand its presence in the Washington, D.C., area as well as his thoughts on premium cost comparisons, the health law’s future and how the presidential election might alter its course. Edited excerpts follow.

Q: Tell us about your plans to expand to the Northeast. Will you return to regions you left back in 2000?

A: This is mostly expansion in the Washington, D.C., area. What we’re doing is we’re investing another billion dollars [there] to build new and expanded care sites. So we’re not going back to New York City. This is not an expansion back into some of the old states. This is growth in Maryland and the District and Northern Virginia. The market is incredibly appealing.

Q: What’s changing in the way people get their health care?

A: We’re putting in electronic care so that our members can e-mail their doctors, pick up their lab results on their iPhones, and schedule appointments electronically. Because we have electronic medical records, our patients can get their medical records on their Androids, iPhone, laptops. In California, we had 12 million e-visits last year — an electronic visit with a doctor that would have been a face-to-face visit. We think the D.C. market is going to be particularly drawn to that approach because it’s hard to get around.

Q: What is the greatest challenge insurers have to face heading into 2014’s full implementation of the federal health law?

A: One of the big challenges is to be attractive in the context of the new exchanges, because exchanges are going to now create an opportunity for individual consumers and for consumers within small groups to make choices between plans.

Q: California is pretty far along in their insurance exchange, right? Do you anticipate that other insurers will enter the California market once that exchange is up and rolling?

A: I sort of hope so. I think there will be some additional insurers coming in for the exchange. I think it will be good for competition. The insurers who come in are likely to be care-system oriented insurers and that’s good for the market. What we need is dueling care systems and not dueling actuaries. And if the exchanges are set up right, they should be set up so that consumers can choose between care systems at the level of the individual consumer.

Q: How do your costs and premiums compare with other plans in California?

A: We’re less expensive and our cost trend is lower. But the rates on any individual set of enrolled people are based on that risk. In California, we’re one of the few plans that offers maternity benefits in the individual market. So we end up with a significantly different risk pool and higher expenses. But that’s a different issue.

Q: Do you anticipate the exchanges are going to slow premium growth in California?

If only the 1 percent [of the sickest patients] enroll then you have to have a $9,000-a-month premium to break even. And $9,000, if you’re wondering how valid that is, it’s not theoretical. In the pools that the federal government set out in the health law for high risk people who are uninsurable … the average cost is about $80,000. If it’s only that 1 percent that joins, well then the premium in the exchanges will need to be $80,000 a year.

Q: Since you don’t know who will make up the risk pool, how do you know how to price those products?

A: We’ll probably do some surveys. We’ll try to get market knowledge. We’re not going to know anyone else’s prices until those prices go into the risk pool. … Our actuaries have said this is the single most challenging and problematic pricing decision they have ever had to make in their careers.

Q: What could change for Kaiser Permanente if President Obama is re-elected? If Gov. Romney is elected?

A: That would depend entirely on what might or might not be repealed. And, as of this moment, I don’t think anyone can begin to predict that. The likelihood of repealing the entire thing is, I think, quite low. So, the question is: are there pieces that might be repealed? And then, like everything else, the devil’s in the details.

Q: Are you surprised that two years in, the public is still split in support of the federal health law?

Q: We talked about the different models and you mentioned that there may be some more competitors. A lot of Americans don’t like this idea of HMOs or insurance plans that they feel limit their choices. How do you respond to that?

A: The beauty of the exchange is that those models can be offered through the exchange. So if the consumer wants that model, they can buy that model.

Updated, Jan. 9, 2013: In response to the question regarding changes in the way people access health care, the interview initially referenced “12 billion e-visits” in 2011. That number should be 12 million. The story has been updated with the correct figure.

Halvorson: Premium Costs In The Exchanges Will ‘Depend Entirely’ On Participation