Has one of the health law’s most popular benefits – the provision that allows children to stay on their parents’ insurance up to age 26 – hit a plateau? A recent survey suggests this might be case. 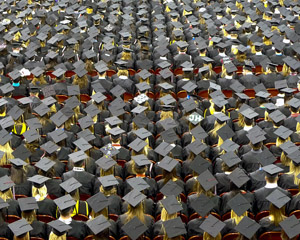 According to a Gallup poll released last week, the uninsured rate among 18- to 25-year-olds has leveled off around 24 percent since early 2011.

The under-26 provision took effect in September 2010, and, at the time, a Gallup poll estimated the uninsured rate at 28 percent. That number dropped 4 percentage points in the following six months and has hovered around 24 percent in five consecutive polls.

“Now that the policy is in full force, enrollment is holding steady,” an Obama administration official who insisted on anonymity wrote in an e-mail to Kaiser Health News.  “But that doesn’t mean that the benefits for young people have ended nor that we won’t seek to cover even more uninsured, young adults.”

The Department of Health and Human Services did not publish estimates for how big a dent would be made in the young adult uninsured rate when it released the under-26 final rule in May 2010. The administration did, however, project that between 700,000 and 2.1 million dependents would gain coverage in 2011. By last June, though, just half way into the year, there were already an estimated 2.5 million newly covered young adults, according to a government survey.

But in its latest analysis, Gallup said the health law’s benefit “may have reached a saturation point.”

“This may be because all or most of those who qualify and have an interest in taking advantage of the provision have already done so,” wrote Gallup’s Elizabeth Mendes. “Or, it could be that only those who are most informed have taken part and many others are still unaware of this provision.”

HHS plans to increase awareness of the option during the spring graduation season, when many students lose the insurance coverage they had as a student, the department official said.

As for further significant decreases in the uninsured rate, look to 2014, said Sara Collins, a vice president of the Commonwealth Fund. That year, the health law — assuming it is not overturned by the Supreme Court — would expand Medicaid to include adults below 133 percent of the federal poverty line. The government would also begin providing subsidies for private insurance through state-run health insurance exchanges. Combined, these provisions could affect millions more young adults, according to the Commonwealth Fund.

Has The Saturation Point For Under-26 Coverage Been Reached?