Despite having survived a challenge in the U.S. Supreme Court, the federal government’s health insurance markets face weighty struggles as they try to keep prices under control, entice more consumers and encourage quality medical care.

The government’s insurance markets – as well as more than a dozen run by states — have been operating for less than two years and are about to lose their training wheels. Start-up funds that have helped stabilize prices and partially pay for administration of the marketplaces are ending, feeding fears that premiums may rise after next year at a steeper rate.

There are still 18 million people who are eligible for coverage but have not purchased insurance on the marketplaces, although some have insurance from elsewhere. Without broader participation, insurers may be pressed to raise rates as they get a more complete picture of how much medical care their current customers are using.

“It has proven to be harder to get people to sign up for exchanges and keep them than experts expected,” said Caroline Pearson, an executive at Avalere Health, a Washington consulting firm. “Hispanics, young people and men are still lagging in enrollment and it still seems like the exchanges have not figured out how to reach them.”

Insurers in a handful of states have proposed increasing premiums for the cheapest “silver” plans by an average of 4.5 percent next year, according to an analysis by Avalere. That was slightly higher than last year’s 4 percent increase for the cheapest silver plans in all states, Pearson said. Consumers who want to stick with their current plans may see larger increases, as insurers are trying to enact double-digit price increases for some policies.

More than 10 million people buy insurance through the online marketplaces set up by the Affordable Care Act, or ACA. About six of every seven of those people are getting financial assistance from the federal government. Even with that help, health care costs can be substantial, with premiums for some reaching nearly a tenth of their gross incomes.

For instance, families of three earning $73,000 have to pay nearly $7,000 on premiums despite also receiving subsidies They still face deductibles, which this year averaged around $2,500 for the most common types of insurance plans, known as silver tiers. If a family required extensive medical care and reached the maximum they would be held responsible for—$13,200 this year—their total health care-related bills, including premiums, would exceed $20,000, or 28 percent of their gross incomes.

“Even some of those who are eligible for financial assistance are still finding the coverage not to be affordable for them,” said Linda Blumberg, a senior fellow at the Urban Institute, Washington think tank.

With the end of start-up funds from the federal government, exchanges need to support their continuing responsibilities, which include running the call centers that offer consumer assistance, operating the exchange websites where people choose plans and marketing their efforts to encourage the uninsured to sign up. Most exchanges, including the federal healthcare.gov site, are funded through an assessment on each plan that is sold, although some receive support from state budgets. Revenue has been volatile, and some marketplaces have been caught short when lower enrollment or smaller premiums led to smaller fees.  Some states are considering handing their marketplaces over to healthcare.gov.

“We don’t have a clear sense of how much it costs to maintain these programs,” said Kevin Lucia, project director at Georgetown University’s Health Policy Institute. 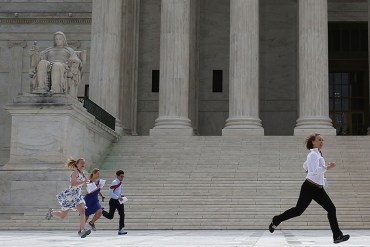 Television interns run to their reporters stationed outside after being handed the ruling on the Affordable Care Act, at the Supreme Court on June 25, 2015. (Photo by Mark Wilson/Getty Images)

If premiums rise, the bill for federal taxpayers who fund the subsidies will increase as well. The government has been giving insurers some breathing room by limiting their losses and taking over the costs of the most expensive cases, but that financial assistance ends in 2017. “As it’s fading out, it’s putting upward pressure on premiums,” said Evan Saltzman, an analyst at the RAND Corp.

James Capretta, a former George W. Bush administration budget official now at the American Enterprise Institute, said it will take several years of exchange experience for insurers to know  how much medical care their customers use —and if it matches what they expected.

While the exchange websites have mostly surmounted their early technical problems, they still lack key pieces of information about the quality of the various plans, which the health law required. The federal Department of Health and Human Services plans to require exchanges to display quality ratings for each plan, which will be represented by a five-star scale, in time for people buying their coverage for 2017.

To devise these ratings, the department this year is testing a satisfaction survey for consumers, asking people to rate on scales of 0 to 10 their health plan, personal doctor, specialists, ease of getting care and other aspects of their experience. The agency is also preparing to collect a few dozen measures of clinical quality. Many are rudimentary, such as whether children had a preventive care visit and whether adults received flu shots.

Government quality rating efforts elsewhere have shown how challenging it is to fairly differentiate between providers. A current effort to evaluate the medical care provided by large medical groups rated 85 percent of them as average. The government has been more discerning about private Medicare Advantage insurance plans, though regulators have been refining those scores since stars were first awarded in 2008. A third of plans were given four or more stars this year, and 4 percent earned 2 ½ stars or fewer.

“This has always been the big question about the ACA,” said Lanhee Chen, a researcher at the Hoover Institution. “Are people going to be able to make educated choices?”

Correction: This story was updated to correct the details about the 18 million people who are eligible for marketplace coverage. Not all of those people are without insurance.