Having trouble finding a doctor?

You’re not alone.Tens of millions of adults under 65 — both those with insurance and those without — saw their access to health care dramatically worsen over the past decade, according to a study released Monday.

The findings suggest more privately insured Americans are delaying treatment due to rising out-of-pocket costs, while safety net programs for the poor and uninsured are failing to keep up with demand for care, say Urban Institute researchers who wrote the report.

Overall, the study published in the journal Health Affairs found one in five American adults under 65 had an “unmet medical need” because of costs in 2010, compared to one in eight in 2000. They also had a harder time accessing dental care, according to the analysis based on data from annual federal surveys of adults. 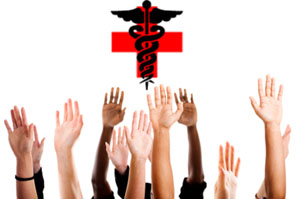 President Barack Obama’s health law, which will expand health coverage to 30 million people starting in 2014, won’t necessarily solve all those access problems, the study says. That’s because the law, which is under review by the Supreme Court, may not alter the trend toward private insurance policies with larger deductibles and higher co-payments or address some of the barriers within public coverage. While the law does increase payments temporarily to primary care doctors who see people covered by Medicaid, it will not force more doctors into the program, or require states to provide dental coverage to adults.

Quincy noted the law does offer several new strategies such as new payment methods to control rising costs—which could help improve access, but there’s no guarantee they will work.

The study underscores what’s at stake in the law’s coverage expansion: People with private or public health insurance have significantly better access to care than the uninsured. If the law is overturned or scaled back, “we would be likely to see further deterioration in access to care for all adults — uninsured and insured alike,” it concludes.

The percent of adults with private insurance who reported an “unmet medical need” doubled to 10 percent from 2000 to 2010, while those who delayed seeking care due to cost rose from 4 percent to 7 percent in the same period, according to the study.

Genevieve Kenney, lead author and senior fellow at the Urban Institute, speculated that higher cost sharing and deductibles that shift more of the cost onto individuals could be driving those changes.

Several studies have found that privately insured Americans are spending a higher proportion of their income on health services, said Peter Cunningham, senior fellow at the nonpartisan Center for Studying Health System Change.

One analysis by the consulting firm Milliman showed health costs for an American family of four have more than doubled since 2002.

“As employers shift more costs onto workers, that is something we are going to continue to see,” Cunningham said.

For insured Americans, a shortage of doctors in some parts of the country was a factor, but not as important as cost, he said.

An increasing number of consumers are also facing delays finding a primary care doctor when they are sick because physicians leave less room on their schedules for walk-ins, said Arthur Kellermann, director of the research firm Rand Health. To make more money, physicians prefer to fill their days with quick turnaround type patients, such as those with chronic illnesses that need regular monitoring, he said.

Poor and uninsured adults had greater difficulties not just with health care costs, but finding doctors who would see them.

About one third of 41 million uninsured adults delayed getting care due to costs in 2010, compared to 25 percent in 2000, the study found. Nearly half the uninsured said they had an unmet medical need in 2010, up from 33 percent in 2000.

Marla Madden, 54, of Boca Raton, Fl., has gone without a Pap test to check for cervical cancer for more than a decade. She’s also years overdue for an MRI to check on her epilepsy and scoliosis.

Uninsured since her divorce in 2002, Madden said she can’t afford the tests. “You do feel a little bit helpless,” she said, adding that she’s recently gotten care through Project Access, in which doctors volunteer their time to treat those without coverage.

Toni Wolf, 45, of Roanoke, Va., says she’s put off going to the doctor for the past year, even though she has diabetes and suffers from a lung disorder that causes her to be short of breath. “It makes me feel very stressed and worried,” said Wolfe, who works as a teacher at a day care center but can’t afford the employee coverage it offers. She also recently got care through Project Access.

The problems indicate that too few providers are taking Medicaid and an increasing number of states are dropping dental coverage — which is an optional benefit, Kenney said.

The American Medical Association, which has backed Obama’s health law, said the study findings were not surprising. “The ability for patients to access medical care is fundamental to the success of our health care system, since without timely health care access the uninsured live sicker and die younger,” said Dr. Peter W. Carmel, association president.

Rand’s Kellermann noted that even as the nation’s total health care bill doubled in the past decade to $2.6 trillion, many Americans had difficulty getting treated.

“We’re paying more and more and getting less and less,” he said.

Asked if there was any good news in her report, Kenney said that in contrast to adults, millions more children gained access to care in the past decade, likely due to the availability of public coverage for children through Medicaid and CHIP. The study found the percent of children who had been to a doctor in the past year rose to 92 percent in 2010, from 89 percent in 2000.

Health Care Increasingly Out Of Reach For Millions Of Americans