Rep. Henry A. Waxman, a California Democrat who is one of the Medicaid program’s most vocal — and effective — champions, announced Thursday he plans to retire from the House at the end of this year, his 40th on Capitol Hill.

The former Energy and Commerce Committee chairman has been one of his party’s central figures in the highest profile health care debates, most recently helping to craft the sweeping 2010 health care law, which Waxman said was one of his “lifelong dreams … finally achieved.”

In a statement, President Barack Obama said that Waxman “will leave behind a legacy as an extraordinary public servant and one of the most accomplished legislators of his or any era.” 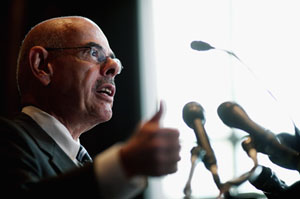 Waxman’s announcement comes just weeks after fellow California House member and health care advocate George Miller announced that he will not seek reelection. (They are the last House members who were in the Democratic wave that swept into Congress in 1974 following the Watergate scandal.) In the Senate, three other Democrats with high-profiles on health care – long-time Medicaid advocate Jay Rockefeller of West Virginia, Finance Committee Chairman Max Baucus of Montana and Senate Health, Education, Labor and Pensions Committee Chairman Tom Harkin of Iowa—are also leaving.  The departures have caused concern among health care groups that Congress is losing some of its strongest advocates for the poor and underserved.

“It’s a whole generation of leadership in health care that we will have to replace,” said John Rother,  president and CEO of the National Coalition on Health Care, whose members include the AFL-CIO, CVS Caremark and Verizon. “We are losing some giants and it will be hard to replace them. It will take time.”

Waxman, 74, has a long and rich legislative history that includes many major health care accomplishments, such as expanding Medicaid to children in families of the working poor, first-time pregnant women in low-income households and families transitioning from welfare to work, as well as increasing the number of services the program provided. He also helped create the Children’s Health Insurance Program and pushed laws that moved breakthrough orphan drugs and lesser-priced generics more quickly to market. He championed the Ryan White Care Act, which provides medical care and other services to people living with HIV and AIDS.

“Fifty-percent of the social safety net was created by Henry Waxman when no one was looking,” Tom Scully, who headed the Centers for Medicare & Medicaid Services in the George W. Bush administration, once told The Washington Times, according to a 28-page summary of Waxman’s legislative legacy from the House Energy and Commerce Democrats. (In typical Waxman style, another 10 pages of footnotes follow.)

Waxman is leaving his mark in other areas as well, including laws designed to improve the nation’s air and water supply, reduce greenhouse gas emissions and remove lead in paint, drinking water and children’s toys.  He pushed for and won tougher health warnings on tobacco packaging and in advertisements for tobacco products.

Throughout his career Waxman has been a passionate advocate for liberal causes and wielded immense power during his chairmanships. Conservatives both fear and revere him for his tireless pursuit of issues he deeply cares about as well as top-notch staff work that often brought to the public’s attention documents the opposition would prefer be kept secret.

A 2006 Time Magazine profile called Waxman a “contender for the title of Scariest Guy in Town” and branded him “his party’s chief inquisitor” who knew how to get headlines.  In a 2007 San Francisco Chronicle piece, Republicans said Waxman was using oversight hearings to bash the Bush administration, but longtime friends and associates maintained that it is policy, not politics, that drives Waxman. “I just want to make sure that the government’s working,” Waxman says in that story.

Waxman’s oversight investigations are legendary. One of the most memorable included the 1994 hearing where he put chief executive officers of the nation’s biggest tobacco companies under oath and they testified that nicotine was not addictive. A second hearing with former tobacco company employees revealed secret industry documents that showed the highly addictive properties of nicotine, helping to fuel public outcry against the industry.

“For decades, he determinedly fought to stop the tobacco industry from preying on our children,” American Lung Association President and CEO Harold Wimmer said in a statement, adding that Waxman’s work led to legislation that gave the Food and Drug Administration authority to regulate tobacco products.

John R. Seffrin, chief executive of the American Cancer Society, said Waxman’s retirement means that Congress will lose “a life-long advocate for public health” and an “extraordinarily effective legislator whose actions have helped to save millions of lives.”

In a statement, Waxman said he ran for elected office “because I believe government can be a force for good in people’s lives,” a view he said he has maintained throughout his congressional career. While progress “can take years of dedication and struggle … it’s worth fighting for,” he said.

Medicaid is one of the programs Waxman fought hardest to expand and defend.  In 2003, CQ Weekly wrote that “inch by inch, budget by excruciating budget, the California Democrat in the 1980s and early 1990s almost singlehandedly expanded Medicaid, the federal health care program for the poor, into the sweeping benefit program it is today.”

House Energy and Commerce Committee Chairman Fred Upton, R-Mich., said that while he and Waxman differ over policy, they have worked together to improve public health.

“Our proudest collaboration was in the 1990s, when we teamed with the late Senator Paul Wellstone and Senator John McCain to double research funding for the National Institutes of Health,” Upton said in a statement. “Providing hope for cures and medical breakthroughs is a goal that transcends politics, and one we continue to share today.”

Waxman said he is not leaving Congress out of frustration. After four decades in Congress “it’s time for someone else to have the chance to make his or her mark,” Waxman said, adding that the ideal candidate is someone young enough to hang in there for the time it inevitably takes to achieve legislative success. “Public office is not the only way to serve, and I want to explore other avenues while I still can,” he said.