Recently, I moved across the country, from Washington, D.C., to San Francisco. I drove the Southern route and decided to conduct an informal survey, asking folks I met along the way a question relevant to the health care reporting I’ve been doing for the past five years.

The question: What bugs you most about your medical care? 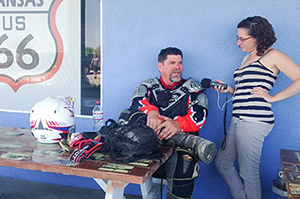 Few people I talked with — at gas stations, coffee shops, grocery stores, parking lots, bars and everywhere in between — even mentioned the Affordable Care Act or Obamacare by name. But I heard again and again how health policy issues I’ve been reporting on in Washington are affecting their lives.

What did I find out?

From coast to coast, people told me that their health coverage and care are too expensive. “I wish it would be cheaper mainly — more affordable,” Ruben Irigoyen of Springerville, Arizona, told me. “That’s mainly my concern. Everything is just very expensive, especially in these small communities.”

“I guess the high price of some my medications, even after insurance,” said Kristie Galy of Baton Rouge, Louisiana.

A few people were able to buy more affordable insurance on the new marketplaces created by the health law. “I’m not really happy with how much things cost. But I did get a plan through healthcare.gov and that helped a lot,” said Christa Sadler of Flagstaff, Arizona.

But the United States continues to spend more on health care than any other country in the world. And Angie Wilson of Nashville, Tennessee, had experienced that firsthand. “Of course the cost” is the big problem, she told me. “The cost! It’s expensive. That’s the main thing.”

Hospitals across the country are seeking to improve medical care by getting primary care doctors, specialists, nurses and other providers to work together to coordinate the care of their patients. Under the health law, the government is penalizing hospitals if too many of their patients return quickly after being discharged. Those readmissions are an expensive symptom of uncoordinated care.

But care coordination is still a work in progress. “I am very upset because my wife had major surgery last Thursday, and they made her leave the hospital on Friday at 7 o’clock at night, and now she’s back in the hospital because she shouldn’t have left so early,” said Glenn Ferreri in Brandon, Mississippi. “So I’m unhappy about the health care regulations going on that’s pushing people out so that we have to take care of them at home where the care should be at the hospitals.”

Right now, there’s a big push to get computers and electronic health records in hospitals and doctors’ offices across the country. Karen Greig of Menlo Park, California, said there are drawbacks for patients.

“The way the computer in the examining room has come between me and the doctor. Half the time they don’t even look you in the eye because they’re busy typing away, looking at the computer and you’re wondering are they even hearing what I’m saying?” Greig told me in a Flagstaff coffee shop.

People I talked with were worried about who would take care of them. Will there be enough primary care doctors to meet demand from patients, especially as more Americans get insurance coverage under the health law. Hart Fortenbery in Lafayette, Louisiana, was particularly concerned about having to see a nurse practitioner instead of a doctor as more mid-level providers are taking on a bigger role in primary care.

“What bugs me most about my medical care is the state of the doctors,” he said. “You can’t see a doctor, and if you do they got to see 50 … people a day. They’re stressed, overworked, underpaid, and you end up with a nurse practitioner who’s able to write prescriptions.”

At a gas station in Fenner, California, just miles from the Arizona border, I met Dudley Pratt of Huntington Beach. He was riding his dirt bike across the Mojave Preserve.

He’s said he’s a free spirit, and it’s all the paperwork about health insurance that drives him nuts. “I can remember back in the ’70s, you would have, like, Blue Cross Blue Shield, you go in and you hand them a card. There was no paperwork or copays,” he said. “You just went to the ER or whatever. Now it seems a lot more complicated.”

And then were even a few people who – lo and behold – were actually happy with their medical care. I met Don Chalmers of San Diego, at the same gas station in Fenner. “I will tell you I have always had good luck with my medical care,” he said. “Every time I went to the hospital I came out better than when I went in.”