There is no one villain in the battle against rising health care costs. Currently, the United States spends more on health care services than any other country, exceeding $2.6 trillion, or about 18 percent of gross domestic product. Most years, medical spending rises faster than inflation and the economy as a whole. Many factors — and nearly everyone — contributes to those increases. 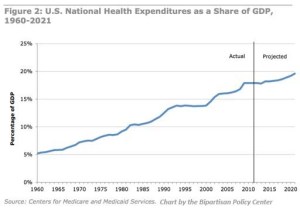 Here are seven ways you or your medical providers play a role, based on a recent report from the Bipartisan Policy Center, a think tank in Washington, D.C.

1. We pay our doctors, hospitals and other medical providers in ways that reward doing more, rather than being efficient.

Most insurers — including traditional Medicare — pay doctors, hospitals and other medical providers under a fee-for-service system that reimburses for each test, procedure or visit. Coupled with a medical system that is not integrated, this encourages overtreatment, including repetitive tests, the report says. New efforts in the federal health law and among some private insurers aim to move payments toward a flat rate for a specific condition, such as a knee replacement, or for a patient’s entire episode of care, in order to streamline costs. Medical systems and doctors are also looking to electronic medical records as a way to improve coordination and reduce unnecessary, repeated tests.

As we get older, we tend to need more medical care. The baby boom generation is heading into retirement, with enrollment in Medicare set to grow by an average of 1.6 million people annually. Additionally, nearly half the U.S. population has one or more chronic conditions, among them asthma, heart disease or diabetes, which drive up costs. And two-thirds of adults are either overweight or obese, which can also lead to chronic illness and additional medical spending. 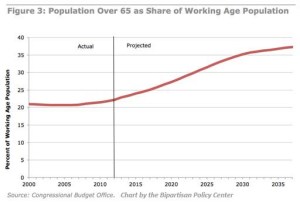 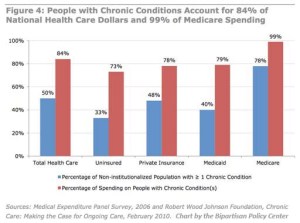 Medical advances can help us get well, avoid disease and delay death, but they also drive up spending. Much new technology comes on the market after being tested only for safety or whether the new treatment is comparable to existing ones or even placebos. Patients and doctors often demand the newest treatments, even if there is little or no evidence that they are better. Prices for newer treatments are often higher than for the products they replace.

4. We get tax breaks on buying health insurance — and the cost to patients of seeking care is often low.

The majority of people with insurance get it through their jobs. The amount employers pay toward coverage is tax deductible for the firm and tax exempt to the worker, thus encouraging more expensive health plans with richer benefits, the report says. How that coverage is designed also plays a role: Low deductibles or small office co-payments can encourage overuse of care, the report says. Increasingly, however, employers are moving toward high-deductible coverage as a way to slow premium growth and require workers to pay more toward the cost of care.

5. We don’t have enough information to make decisions on which medical care is best for us.

While medical journals, the Internet and the popular press are awash in health information and studies, professionals and patients find there is no broad standard for evaluating individual treatments, or how specific treatments compare with others. Even when evidence shows a treatment isn’t effective, or is potentially harmful, it can take a long time for that information to actually change how doctors practice or what patients demand, the report says. Additionally, Americans vary widely in how they view end-of- life issues, with some desiring every possible medical intervention to stave off death in every situation, no matter how small the possibility of success.

6. Our hospitals and other providers are increasingly gaining market share and are better able to demand higher prices.

While mergers or partnerships among medical providers or insurers may improve efficiency and help drive down prices, consolidation can also have the opposite effect, allowing near-monopolies in some markets and driving up prices, the report says. Increasingly, hospitals are buying up rivals and directly employing physicians, creating larger medical systems. 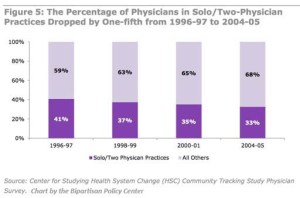 7. We have supply and demand problems, and legal issues that complicate efforts to slow spending.

Malpractice premiums and jury awards are part of what drives spending. A larger problem, although hard to quantify, is “defensive medicine” — when doctors prescribe unnecessary tests or treatment out of fear of facing a lawsuit, the report says. Fraudulent billing or unnecessary tests by medical providers seeking to “game the system” are another concern.

Finally, the report notes that state laws sometimes limit the ability of nurse practitioners or other medical professionals, who are paid less than doctors, to fully perform work for which they are trained. The U.S. faces a shortage of primary care doctors, so more advanced practice nurses and others will be needed to help care for patients who gain insurance coverage under the federal health law. Conversely, the U.S. has a higher ratio of specialists than other countries, which can serve to drive up spending. Specialists have more advanced training than primary care doctors, and are paid far more.