MODESTO, Calif. — About a dozen mostly retired locals took over a corner of a busy intersection on a recent Saturday afternoon in this San Joaquin Valley city, toting signs that read “Dump Denham 2018.”

Several cars zooming by honked in support. Buda Kajer-Crain, 69, paced up and down the sidewalk waving a large American flag. She said she wanted U.S. Rep. Jeff Denham (R-Turlock) gone, in part because of his vote one year ago to dismantle the Affordable Care Act.

“We had a big formal town hall meeting where he said he would not support taking away the ACA,” said the retired clinical-lab scientist. “He lied.”

Kajer-Crain, a Democrat, said Denham’s vote to take apart the national health law and curtail the Medicaid program betrayed his constituents, who rely heavily on both. Other activists and pundits have in the past year identified assaults on the ACA as a potentially pivotal issue in the 2018 midterm elections in California’s traditionally red — but increasingly purple and blue — heartland.

On the cusp of Tuesday’s primaries, however, it is far from clear that health care is the wedge issue in California congressional races that pundits once envisioned. After all the rallies and protests in San Joaquin Valley districts and around the state last year, the urgency on health care seems to have waned — at least for now.

All four Republican House members in the Valley voted, along with the rest of California’s Republican delegation, to dismantle and replace the Affordable Care Act last year. But at this point, three of the four appear likely to win re-election.

Denham’s seat is considered the most vulnerable, according to several political forecasters. Even if it flips, however, it’s not certain health care will be the defining issue. Denham faces five Democratic opponents and most list health care as a priority. At least as important, however, is the district’s general political bent — it now has a slight Democratic majority and voted for Hillary Clinton in 2016.

Meanwhile, the seat of House Majority Leader Kevin McCarthy (R-Bakersfield) is considered safe, and the districts of U.S. Rep. Devin Nunes (R-Visalia) and U.S. Rep David Valadao (R-Hanford) could be competitive but are likely to remain red, forecasters said.

Polls on congressional candidates are hard to come by until the general election, but the vulnerability of House seats can be roughly measured by the general political environment, campaign financing and the apparent strength of challengers, experts say.

Nationally, health care is one of the top issues for Democrats in the midterms but ranks further down for Republicans, behind the economy, immigration and gun policy, according to a recent Kaiser Family Foundation poll. In general, the election centers on attitudes toward President Donald Trump, the poll found. (Kaiser Health News, which produces California Healthline, is an editorially independent program of the foundation.)

“Most voters may not necessarily be concerned about who voted for the [Republican] health care bill,” said Kyle Kondik, managing editor at Sabato’s Crystal Ball, a political forecasting site run by the University of Virginia Center for Politics. They’re just voting the party, he said.

The Republican bill that would have replaced key parts of Obamacare — known as the American Health Care Act — passed the House last May and failed by one vote in the Senate. It would have widely reduced the tax credits that help many people buy insurance from ACA marketplaces, eliminated the tax penalty for people who don’t have insurance, and phased out the Medicaid expansion that has covered 15 million people. Congress ultimately repealed the tax penalty for being uninsured, effective as of 2019.

At the time, some advocates and residents of the San Joaquin Valley said the “yes” votes of Republican House members undermined their own constituents. They noted that the region has the some of the biggest gaps in access to health care in the state, if not the country, and that it is plagued with dirty air and high rates of chronic conditions such as asthma and diabetes.

The UC Berkeley Labor Center estimated in 2017 that if the ACA were repealed, more than 465,000 people in the San Joaquin Valley would lose their Medi-Cal coverage in 2027 and the local health care system would lose more than $3 billion in annual Medi-Cal funding.

It’s not entirely clear why health care seems to have taken a back seat in the run-up to the primaries. Some experts predict it will probably play a bigger role in the general election in November; others say it’s no longer the hot topic it was, and voters have moved on to other issues.

As is often the case, poor people who face obstacles to care may be less inclined to go to the polls or unable to vote because they are in the country illegally. And though the region increasingly is voting Democratic, it still has many true-red voters who oppose the ACA and are fiercely loyal to their incumbent Congress members.

Stephen Tootle, a Republican in Nunes’ district and a history professor at the College of the Sequoias in Visalia, said Obamacare hasn’t really helped the people in his district, who still struggle with poor access to providers and hospital closures. “It’s a joke,” he said.

He supports Nunes because he says the congressman is a champion for water allocation. For Tootle, it’s the No. 1 issue “that really affects how people live here.”

Stephen Routh, a political science professor at California State University-Stanislaus, said he expects health care to play a bigger role in the general election, when incumbent Republicans will have only one challenger.

On Nov. 6, the races in each district will be between the two top vote-getters from Tuesday’s primary contests. As that date approaches, Routh said, Democrats are “going to mention Obamacare repeal endlessly. That’s going to be a major hammering point.”

But Vito Chiesa, a Republican and a member of the Stanislaus County Board of Supervisors, said voters are not as concerned about health care, because it “seems people believe the ACA is here to stay in some form.

Mary Borbon, 36, who lives in Lemoore, a town of about 26,000 people in Valadao’s district, said she cares about health care, especially its affordability. She’s been on and off Medi-Cal as her income from seasonal jobs fluctuates. But, like Chiesa, she said that’s not all she or other voters are thinking about. “Right now I’d say the economy and immigration are big,” she said.

Valadao is likely to win re-election, according to Sabato’s Crystal Ball, even though registered Democrats significantly outnumber Republicans in his district and more than half of his constituents are on Medi-Cal. Many residents remain loyal to Valadao, a local dairy farmer and businessman who has represented the district since 2013. Some say he’s likable and relatable. Others don’t think the Democrats have a strong enough candidate to represent their district, which includes all of Kings County and parts of Fresno, Kern and Tulare counties. 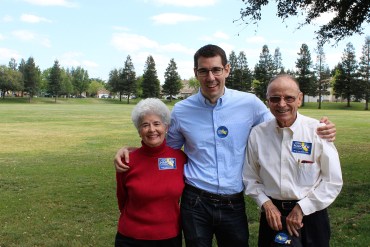 Josh Harder, a Democratic candidate who seeks to unseat Republican Jeff Denham, poses with two of his supporters, Dr. Roland Nyegaard and his wife, Kate Nyegaard, during a recent canvassing event. On Tuesday, voters in California’s 10th congressional district will decide whether Harder will be on the November ballot. (Ana B. Ibarra/California Healthline)

If “the blue wave” can flip any House seat in the San Joaquin Valley, bets are on Denham’s district, experts say. Some longtime voters like Kajer-Crain, the street protester, think it can be done.

Denham is not only facing another Republican — Ted Howze, a veterinarian and former council member in the city of Turlock. He is also up against Democrat Sue Zwhalen, who has 40 years of experience as an emergency room nurse and says she has received strong support from her Republican friends and neighbors.

“Health care,” he said during a canvassing event in Turlock, “is the reason I’m running for Congress.”

Tuesday’s election could be an important gauge of whether that’s a winning strategy.