The federal health law, which will expand coverage to 30 million currently uninsured Americans, will have little effect on the nation’s rising health spending in the next decade, a government report said today. 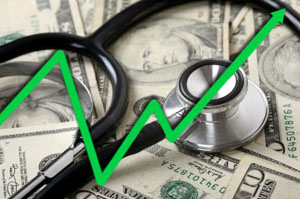 The report by the Medicare Office of the Actuary estimated that health spending will grow by an average of 5.8 percent a year through 2020, compared to 5.7 percent without the health overhaul. With that growth,  the nation is expected to spend $4.6 trillion on health care in 2020, nearly double the $2.6 trillion spent last year.

Health law critics said the report confirmed their concerns. “Most of us understood the health reform law was about expanding coverage not cutting costs,” said Joseph Antos, a health policy expert at the conservative-leaning American Enterprise Institute.

But White House Deputy Chief of Staff Nancy-Ann DeParle said the report showed Americans were getting a good deal. “The bottom line from the report is clear: more Americans will get coverage and save money and health expenditure growth will remain virtually the same,” she said on the White House blog.

DeParle, who helped lead the White House efforts on the overhaul, said several delivery system reforms being tested under the health law will work to lower spending. “We know these new provisions will save money for the health care system, even if today’s report doesn’t credit these strategies with reducing costs,” she said. She pointed to new programs that administration officials have said they hope to implement changing the way Medicare and Medicaid pay doctors and hospitals.

National health spending in 2010 grew at its slowest rate ever recorded  3.9 percent  as a result of more Americans forgoing treatment because they had lost their jobs and their health coverage, said the report, which is being published online today by the journal Health Affairs. In 2009, health spending grew by 4 percent.

The report estimates that spending on health will accelerate this year because the economy is expected to improve and people would have more disposable income to spend on medical care.

In 2014, when the major coverage expansions of the health law begin to take effect, national health spending is expected to grow 8.3 percent, according to the new analysis. But spending growth should return to its 6 percent historical average from 2015 to 2020 as some employers drop coverage and the so called “Cadillac tax” on high-cost insurance plans takes effect in 2018. “The effect is likely to be a slowdown in the growth of health services, health insurance premiums and health spending overall,” the study said.

Meredith Rosenthal, a health economist at Harvard School of Public Health, said it is difficult to predict what impact the health law will have on slowing national health spending.  “Many of the components of the law that are intended to control costs are still in draft form,” she said citing experiments such as accountable care organizations and bundled payments that change how Medicare pays providers.

The number of Americans with employer-sponsored insurance will grow from 163 million last year to 170 million in 2014, the report estimated. But by 2020 that number is expected to drop to 168 million as a result of two factors: Baby Boomers joining Medicare and employers dropping health coverage for workers. Most of those workers would turn to new state insurance exchanges  or marketplaces or Medicaid, the federal-state health program for low-income and disabled people.

The issue over how many employers would stop offering coverage has been a political flash point since the health law was approved in March 2010. Democrats maintain most employers would continue to provide coverage, but Republicans and other critics predict many companies would drop it because their workers will be able to go to new health exchanges. Starting in 2014, the health law requires all employers with 50 or more workers to provide coverage or pay a fine.

The Congressional Budget Office – the neutral scorekeeper – estimates that, by the end of the decade, 3 million fewer people will get health insurance from their employer. That’s slightly more than the Office of Actuary prediction.

The study authors stressed their projections could vary depending on many factors, including the overall state of the economy and how quickly people sign up for new coverage.

“These projections are definitely uncertain and that increases as we move along in the projection period,” said Sean Keehan, a study author and an economist in the Office of the Actuary.

The Medicare actuaries acknowledged that they were off on one of their estimates last year. At that time, they predicted that national spending in 2009 would grow by 5.8 percent, instead of the 4 percent growth that the report said actually occurred. Keehan said one of the factors helping push that prediction off the mark was that fewer people than expected joined COBRA plans after losing their jobs and that resulted in fewer people with health coverage and less spending.

The office also predicted last year about 375,000 people would sign up for new Pre-existing Condition Insurance Plans by 2013. But since the plans began a year ago under the health law, only about 20,000 people have signed up.

CMS Chief Actuary Rick Foster attributed the lack of public awareness of the new insurance pools for the less-than-anticipated participation. He said his office took into account the low participation rates in making estimates for enrollment in Medicaid and insurance exchanges starting in 2014.

The report estimated about 13.9 million people would enroll in new state-based insurance exchanges in 2014 and the number of uninsured would drop by nearly 20 million in that year. Given how many millions of eligible people don’t sign up today for Medicaid, that prediction is highly speculative, said Steven Findlay, an analyst at Consumers Union.