LIMA, Ohio — Speaking over constituents’ often-hostile shouts and angry murmurs, one of Congress’ most conservative Republicans told a tense town hall meeting here Monday that less government regulation — not more — is the solution to their rising health care premiums.

“What we want to do is make sure we have the best health care system in the world and bring back affordable insurance plain and simple. That’s what I’m trying to do. That’s what we continue to focus on,” said Rep. Jim Jordan, the co-founder of the House’s conservative Freedom Caucus. Its firm opposition to the GOP’s plan to replace the Affordable Care Act forced party leaders last month to yank their bill from a vote on the House floor.

But on the eve of Congress’ return to Washington after a two-week Easter recess, Jordan offered no clues to his party’s next move on a health care bill or the prospects for a government shutdown if Congress fails to agree before the Friday deadline on a bill to provide short-term funding to keep it operating.

More than 200 people attended the Ohio congressman’s 2 1/2-hour meeting, mostly pummeling him with questions and personal stories about their health care. Jordan heard from constituents with sick children, veterans who couldn’t access Veterans Affairs’ care and nervous families who feared what could happen to them if federal Medicaid funding is cut, among others.

Seated on black folding chairs in a windowless hall of the Lima Veterans Civic Center, many in the audience followed a practice that’s been common this year at congressional members’ town hall meetings — holding up red signs when they disagreed with Jordan and, less frequently, green signs when they agreed. Jordan, unruffled by opposition, drew laughs once when he referred to a woman in the crowd as “gentlelady,” in the formal way that male members of Congress sometimes address female members when the House is in session.

Tobias Buckell told the congressman the ACA’s mandate that insurers cover preexisting conditions had made it possible for both his wife, Emily, and him to have careers as freelancers — he as a science fiction writer and Emily as an e-book designer. Buckell, the father of twin 8-year-old daughters, told Jordan the only way he could risk that career choice was because he was able to buy insurance through the law’s exchanges. He has a genetic heart condition that he said had made him virtually uninsurable before.

“We’re going to be moved to a high risk pool, we’ll pay three times as much our current rate … how will that help me?” asked Buckell, 38.

Though the most vocal members of the crowd were largely in disagreement with Jordan’s views, a quiet minority in the front of the room shook their heads and waved green signs in agreement when the congressman responded to a question by saying he did not believe health care is a universal right. 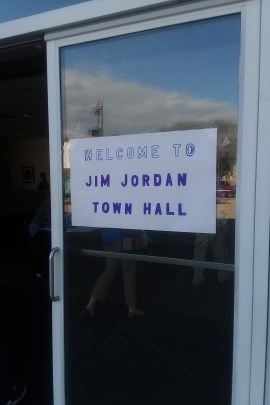 “I do not believe health care is a right. Rights are not given to us by the government, rights come from God, although Jim acknowledged that the American people have come to accept it as a right,” said Linda Gentry, a 66-year old constituent who works for an insurance company.

Of the 17 questions Jordan was asked, 13 related to health care. Lisa Robeson, the event’s moderator, estimated that around half of the 45 questions submitted in advance focused on the topic.

Jordan’s comments on the federal government’s role in solving the opioid crisis brought what might have been his audience’s most negative reaction of the night.

Ohio has been especially hard hit in recent years. It led the nation in opioid overdose deaths in 2015, according to the Kaiser Family Foundation, while Dayton, just an hour and a half south of Lima, topped a criminal justice group’s national ranking of America’s most drugged-out cities last year.

“I’m not convinced the federal government giving more money will solve the problem,” Jordan said. Instead of a “grand scheme” handed down from Washington, he suggested churches, schools and families are best equipped to handle the opioid epidemic – a remark that raised a sea of red signs across the room.

Jordan’s 4th District touches the northern part of the state near Lake Erie, and includes rural areas and suburbs of Columbus, the state capitol. He has been the district’s congressman since 2007 and he has little reason to be alarmed by contentious town halls. Jordan was reelected last November with more than 68 percent of the vote.

By the end of Monday’s town hall, some of Jordan’s constituents were divided on whether they’d heard what they came to find out.

“It’s clear to me that there is sort of a vague idea what the Republican replacement would be, and I don’t think we got a statement about that,” said Robert Kemp, 62, a health care economist that also rose to speak in favor of universal health care.

Barbara Mayer, 81, a retired teacher, didn’t mind the lack of specificity. She said it was unfair for people to demand comment on a measure that hasn’t been finalized yet.

“They’re quoting things about what Trump’s bringing out and it isn’t even public yet,” Mayer said. “People aren’t giving the new Congress a fair trial.”