Americans express changing expectations toward retirement, with near-retirees feeling significantly more anxious than those who’ve already left the workforce about whether their income and savings will support them into their golden years. Those approaching retirement feel most concerned about whether they will be able to pay for their health care as they live increasingly longer, according to a poll released Thursday. 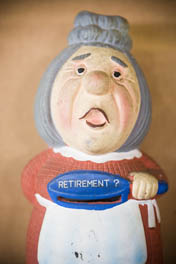 The Allstate/National Journal Heartland Monitor Poll found that Americans are increasingly working into retirement and that 75 percent of respondents who are 50 or older — but not yet retired — expect to work in some capacity after retirement, with many doing so out of necessity. On average, near-retirees expect to work six years longer than current retirees did.

“Aging Nation: The Impact of America’s Senior Population” is part of an ongoing series of polls examining the impact of the current economic downturn. It found that the economy has been a “game changer” for near-retirees, many of whom have seen their houses decline in value and their stocks and other investments fluctuate sharply in volatile financial markets.

“This poll should really add urgency to get our financial house in order,” said Tom Wilson, chairman, president and CEO of Allstate, at a National Press Club event in Washington, D.C., where the poll was released.

According to the findings, the top concern for people approaching retirement is the cost of health care, especially long-term care. People approaching retirement are also less confident than current retirees about their ability to afford long term care or assisted living: 47 percent of near-retirees are confident or somewhat confident, compared with 49 percent who are not confident, while 58 percent of current retirees are confident or somewhat confident, and 38 percent are not.

A sizable majority of respondents want to protect the current Medicare program, even as Sen. Ron Wyden, D-Ore., and Rep. Paul Ryan, R-Wis., unveiled this week a new overhaul plan, which would give beneficiaries a fixed amount to use toward buying private coverage or to pay for a traditional fee-for-service plan.  Sixty-two percent believe the government should maintain the current Medicare system, even if efforts to control costs mean the government ultimately has to limit providers’ payments and, in response, providers reduce the number of Medicare patients they accept. In comparison, 17 percent of respondents believe the program should be revamped to provide seniors with a lump sum to pay for private insurance, which could potentially lead to more out-of-pocket costs.

Event speakers also mentioned the need to develop ways to keep older Americans in the workforce. Betsy Reid Creedon, a former General Motors employee who now works for BOOM! The New Economy, a Southeast Michigan organization that helps workers older than 50, said  that many retirees escaped relatively unharmed as auto makers downsized during the recession but near-retirees were hit hard because they expected to receive benefits they had worked years for. “The rules have changed. We no longer have pensions for life, we no longer have health care for life,” Creedon said. “The young people … they’re under no illusions.”

The poll, conducted by FTI Consulting for Allstate and National Journal, surveyed 1,200 adults between Nov. 30 and Dec. 4 and has a margin of error of +/- 2.8 percent.

Health Costs A Key Worry For Those Nearing Retirement