National health spending will increase modestly over the next decade, propelled in part by the gradual rebound of the U.S. economy and the growing ranks of Americans who became insured under the health law, government actuaries projected Wednesday.

But those growth rates are not as high as what the country saw for the two decades before the Great Recession crippled the U.S. economy at the end of 2007, according to the report from the Centers for Medicare & Medicaid Services Office of the Actuary and published in the journal Health Affairs.

The actuaries estimate that health spending grew just 3.6 percent in 2013, the fifth year of historically low rates of spending growth. But it will accelerate to 5.6 percent in 2014. They also forecast that the average growth rate for 2015-2023 would be 6 percent. That is up just slightly from last year. 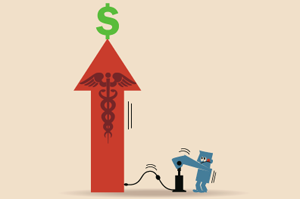 The findings also suggest that health care will outpace growth in the gross domestic product over the next decade. Health care’s share of GDP, which has remained fairly stable since 2009, will rise from 17 percent in 2012 to more than 19 percent in 2023.

While some health care analysts and Obama administration officials have said the Affordable Care Act is reducing costs, CMS actuaries are no longer measuring the effects of the law on health care spending.

“We are no longer quantifying the impacts of the Affordable Care Act on national health spending,” Andrea M. Sisko, the lead author on the study, told reporters at a briefing on the findings. “Now that the Affordable Care Act has been in place for well over four years, it is becoming increasingly difficult to accurately estimate … what the world would look like in the absence” of the law.

Sisko also said it is too soon to estimate the impact of the health law’s delivery system changes on the nation’s health care system.

Paul Ginsburg, a public policy professor at the Schaeffer Center for Health Policy and Economics at the University of Southern California, said the report illustrates that “the recession and the very slow recovery from the recession are important determinants of health spending trends …. There’s a been a lot of debate over the past year or two about how much of the slowdown we’ve experienced has been from the business or the economic cycle and how much is due to real changes in health care. My sense is it’s both. This very steep recession and this very slow recovery from it, especially when you look at the very low growth in wages, is something that has definitely depressed health care spending. The implication of higher deductibles, of greater cost sharing, that’s important as well.”

Better economic conditions, the aging of the baby boomer generation into Medicare and increased number of people with insurance are expected to result in greater demand for health care goods and services, increases in health coverage and faster rates of spending growth, in particular for private health insurance, the researchers said.

Those trends, the researchers said, will be countered by somewhat slower growth in Medicare payment rates mandated by the health law, cuts made to hospitals and doctors in the congressional budget-cutting efforts and the increasing use of higher deductibles in private insurance plans that have cut down on consumer health spending.

The number of uninsured people is projected to fall from about 45 million in 2012 to 23 million by 2023, according to CMS actuaries.

Other key takeaways from the CMS report include:

— Medicare spending growth slowed from 4.8 percent in 2012 to 3.3 percent in 2013. That was caused by the automatic 2 percent payment cuts known as sequestration and other payment adjustments, especially reductions in federal payments to the private Medicare Advantage plans that offer an alternative to traditional Medicare. Late last month, the Congressional Budget Office estimated that lower costs for medical services and labor will help reduce both Medicare and Medicaid spending over the next decade.

Continued movement of baby boomers in to the program and more spending on older beneficiaries will cause Medicare expenditures to rise 7.9 percent in 2020, according to the CMS report.

— For 2016-2023, faster increases in disposable personal income and greater enrollment in private health insurance will contribute to the projected 6.1 spending growth per year for health care services, faster than the 4.7 percent average growth expected for 2013-15.  But those conditions are likely to change, researchers warned.

“Consistent with the historical relationship between health spending and economic cycles, these projected changes in the economy are expected to influence health expenditure growth with a lag,” resulting in a projected peak growth in health spending of 6.6 percent in 2020, CMS said.

Health Care Spending Forecast To Increase Modestly In Next Decade