Before the raucous legislative battle to pass the health law in 2010, there was a quieter but significant process that brought health industry players to the negotiating table. Insurers, hospitals and drug makers all cut deals to help shape what would become the Affordable Care Act. 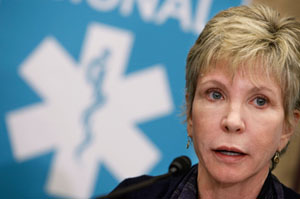 America’s Health Insurance Plans President and CEO Karen Ignagni is part of a contingent of insurers who are planning their next move if the individual mandate is struck down by the Supreme Court (Photo by Chip Somodevilla/Getty Images).

Now, as the Supreme Court awaits arguments in one of the most closely watched cases in years, the deals are threatened along with the law. And the industry groups are deploying different strategies as they seek to defend their interests before the High Court.

Insurers have chosen not to defend the massive dividend for their industry that many believe makes the law most vulnerable. The “individual mandate” requires almost everybody to buy health insurance or pay a fine – a major concession the lobby got at the bargaining table. But insurers are not taking a stand on whether the mandate is an unconstitutional abuse of federal power, as the law’s opponents contend.

“I don’t think the public or the courts recognize our industry for its constitutional expertise,” said Karen Ignagni, chief executive of America’s Health Insurance Plans, an industry lobby.

Insurers do express strong views on what the court should do if the mandate is tossed out. Their memo to the justices joins more than 130 other briefs, the largest number of “friend of the court” briefs ever filed for a Supreme Court case.

Hospitals, the law’s most energetic health-industry defender, urge the court to uphold the entire health overhaul act. Drug makers just want the legal case and resulting uncertainty to be over.

The American Medical Association, the largest doctor lobby, supports the law and is working to influence rules for insurance exchanges and other components. But, like the largest drug trade group, it has filed no briefs with the court.

“There have been ample statements on all sides of the issues,” said AMA President Dr. Peter Carmel. “Our focus now is on assuring effective implementation of the law and on securing further improvements.”

Much calculation focuses on the individual mandate, a multibillion-dollar source of revenue to pay for expanded care but one that is opposed by dozens of states as government overreach. If the mandate disappears, insurers have the most to lose, analysts said.

“You need the individual mandate in place for this reform law to work,” said Rouven Wool-Lewis, a health services analyst for T. Rowe Price, a Baltimore money management company. “If that gets ruled unconstitutional, I think people worry about the profitability of managed care.”

The insurers worry that the court could block the mandate but uphold a separate requirement that they accept all members at a uniform price regardless of pre-existing illnesses, a situation Wool-Lewis likened to “signing up for fire insurance while your house is on fire.”

Under that scenario insurers could find themselves with sick new members but without much of the expected money to pay for their care.

“That’s the most important thing here – the linkage” between the mandate and insurers’ obligation to sell policies to all comers, Ignagni said. “The American people want reforms to work and without that link it’s going to be impossible to make that happen.”

If the court dumps the mandate, insurers want the justices to jettison this “guaranteed issue” requirement, too. The industry draws comfort from the fact that the federal government has taken the same position.

Besides threatening insurer profits, which have been robust since the law was passed, a decision to strike the mandate but leave the expanded coverage requirements in place could hurt all consumers, the industry contends.

“That’s clearly going to cause premiums to move up for the people who have insurance,” said Peter Costa, who follows managed care stocks for Wells Fargo.

As evidence, insurers point to states such as New York, New Jersey and Washington that required plans to expand coverage without a sign-up mandate. The result, they say, was skyrocketing premiums and a plunge in the number of people covered in the individual market. Some, however, argue that federal subsidies distributed through health insurance exchanges for lower income workers would keep individual premiums relatively affordable even in the mandate’s absence.

Hospitals were early proponents of the Affordable Care Act, not least because of the promise of billions in extra spending through the mandate, government insurance subsidies and a substantial expansion of Medicaid, the federal program for low-income patients. But hospitals, too, are concerned the court will outlaw the mandate while upholding provisions that would put them at financial risk.

One component of the law would cut payments to hospitals treating a disproportionate share of the medically indigent. Others would penalize hospitals if they don’t increase productivity or reduce expensive readmissions.

“Those are cuts that the hospitals accepted in anticipation of increased coverage” via the mandate, said Melinda Hatton, general counsel for the American Hospital Association. Those parts of the law “are directly linked to the individual mandate” and should survive or disappear along with it, she said.

The court will also hear arguments against the Affordable Care Act’s Medicaid expansion, another huge source of new revenue not only for hospitals but for insurers, which have substantially expanded their Medicaid managed care business. States contend the expansion is unconstitutionally “coercive,” an argument that hospitals sharply dispute.

“It’s clearly within Congress’ power to make changes in the Medicaid program,” Hatton said. “And this is no different.”

“I do not believe from the conversations I’ve had that anybody in the insurance industry wants this law thrown out in its entirety,” said Robert Laszewski, a veteran health policy consultant and former insurance executive. “While a lot of people in the industry don’t love this law, we didn’t get a public option and we didn’t get a Canadian-style system.”

Canada’s government-run medical system or a proposed “public-option” government carrier to compete with commercial insurers are anathema to the industry.

“The notion that we might have to do this all over again is not a notion that anybody in the industry is going to look forward to,” Laszewski said.

In any event, Wells Fargo analyst Costa believes the stakes for the health care industry are lower in the Supreme Court deliberations than they are in the November elections.

The individual-policy business affected by any decision over the mandate is “less important when you consider the big picture of earnings from these companies,” he said.

The bigger problem comes if Republicans take control of the Senate or even the White House, he said. While they’re unlikely to gain enough seats to repeal the health reform act, they could win enough control to jeopardize funding for the Medicaid expansion and other measures.

“We believe the biggest risk is around defunding health reform and not repealing it,” Costa wrote in a report to clients.

Another possible outcome of court deliberations is delay. The justices could rule that the Anti-Injunction Act prevents the plaintiffs from challenging the mandate until it goes into effect in 2014. On that issue, at least, the industry seems to be in broad agreement with the opinion of the Pharmaceutical Research and Manufacturers of America, a trade group.

“We think the court should take the opportunity to see the legal issues resolved,” said PhRMA spokesman Matt Bennett. “Uncertainty in the law is bad for patients, providers and the entire health care sector.”