Consumers aren’t the only ones frustrated by problems with the online health insurance exchanges being run by the feds.

Private companies that sell health insurance on the Internet are also in a bind. Websites like eHealthInsurance.com that were planning to start selling new, subsidized Obamacare policies on Oct. 1 still can’t offer them to customers. 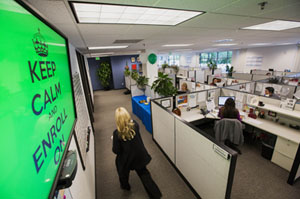 First off, the online brokers got a late start. They didn’t get permission to sell exchange plans until late July. And the companies say they got plan information data too late to test it sufficiently. The Obama administration declined to comment on the nature of the problems that have the online brokers stuck.

eHealthInsurance.com has been selling health coverage online since 1999. Then, the Affordable Care Act passed and the federal government said it was going to open online insurance shopping sites. Gary Lauer, CEO of eHealth, the company behind the site, fought long and hard for the right for private firms like his to compete. The government finally relented.

But at this point, many consumers still can’t shop for these plans on commercial sites, and Lauer says he has no firm date for when they’ll be able to.

“I hope in the next few weeks, and I’ve been saying that for the past couple of weeks,” Lauer says. “We’re somewhat dependent on this federal exchange working in a stable fashion.”

Telling potential customers they’ll have to come back later is a problem for companies like Lauer’s and for the White House. But Caroline Pearson, with the consulting firm Avalere Health, says if the White House is going to reach the goal of getting 7 million Americans signed up for health coverage in the law’s first year, the it needs electronic brokers’ help.

“I think they’re very important, and I think particularly because they’ve been in the business for a long time, they’ve really refined an easy shopping experience,” Pearson says. “Many of the people who are eligible for subsidies in the exchange are folks that already have shopped with eHealth.”

EHealth, she says, has a slick display and strong search functionality that she thinks is going to be appealing to consumers. “So I think they represent a very important partner to the government, assuming they can get full data from the federal government and get up and running fully sometime soon.”

In the meantime, eHealth’s Lauer says his company is offering rain checks to shoppers who qualify for new subsidies to help them afford insurance, and hoping they’ll come back.

“We’re in communication with the federal government every day,” Lauer says. “And it’s just occurring slower than we would like. We’re being patient and we’re working with them constructively because we want to get this up and running and available to people who are lower income. I just think it’s critically important.”

Uncertainty is bad for business, but these online brokers aren’t totally dead in the water. They can still sell health policies to people who don’t qualify for subsidies. Lauer says his company is selling plenty of those. And the health care law is substantially boosting traffic to his site.

But people with subsidies represent a huge new market and commercial online brokers can’t yet offer them the product the federal health care law requires.

“If we’re collectively late by a few weeks, sure it’s a glitch, but big picture it’s still a small bump in the road,” says Chini Krishnan, CEO and co-founder of the start-up company GetInsured. It was hoping to start selling subsidized Obamacare policies online on Oct. 1, too. Krishnan is disappointed his company still isn’t able to do that, but as long as the government fixes its website in the next few weeks, he thinks e-brokers will be OK.

“[The] reality is that most folks have until Dec. 15 to make their final purchase decision,” he says. “We’re recommending that they use this early period to learn about their options, educate themselves, not rush to a decision.”

Avalere’s Pearson agrees that online brokers can probably weather problems for the first few weeks, but says they’re understandably nervous about when the bugs might be worked out.

“I mean, that’s the million-dollar question at this point that everybody is asking,” Pearson says. “We have seen gradual improvements over time, but at this point it’s really hard to predict when we’ll have a smooth shopping experience.”

This piece is part of a collaboration that includes NPR and Kaiser Health News.