The long-anticipated rules released Monday are less prescriptive than some consumer advocates desired, but grant states’ requests that they be given broad leeway to design and regulate the marketplaces, called exchanges. 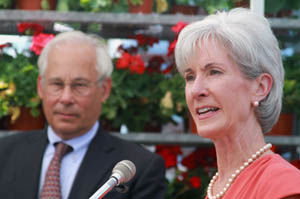 The exchanges are a key element of the federal health care overhaul law. About 11.5 million people are expected to use them the first year — growing to 27 million by 2018 — to comparison shop for coverage.

Consumers who qualify for assistance also will use the exchanges to receive federal subsidies or tax credits to purchase insurance or to gain access to Medicaid, the state-federal program for the poor.

Under the proposed rules, the marketplaces will have to post information online about price and quality, offer specific standardized plans and set an annual open enrollment period.

Despite lobbying from consumer groups, insurers will be allowed to hold seats on exchange oversight boards and states will not be required to negotiate with plans on price or benefit offerings.

Although there is a deadline of Jan. 1, 2013 for states to show they will have an exchange up and running a year later, the proposal offers some wiggle room: States showing progress will be granted “conditional approval.”

Still, states that can’t  or won’t  set up their own marketplaces will have the federal government step in and do it for them.

States that get ready later can still set up their own exchange  so long as they give the federal government a year’s notice, the rules say.

America’s Health Insurance Plans, a major trade group, appeared to have won some of what it was lobbying for. In a statement issued Monday, AHIP president and CEO Karen Ignagni welcomed the authority states would have, saying they “have the experience and local-market knowledge to ensure exchanges meet the needs of consumers in their state.”

In the weeks leading up to the release of the regulations, the industry argued that insurer representatives should not be barred from memberships on boards overseeing exchanges, saying their expertise would be valuable.  In an October letter to HHS, America’s Health Insurance Plans urged regulators to give states the flexibility to take all qualified insurers  and not to require price negotiations or competitive bidding. Such restrictions could limit consumer choice, AHIP wrote.

The proposed rules grant states authority to follow either path — allowing any qualified insurance plan to be sold on the exchange or setting tighter rules limiting insurer participation. But the rules also say competitive bidding could boost state efforts to provide “additional value and quality objectives.”

Terry Gardiner, a lobbyist for Small Business Majority, a small business group that strongly supports the health law, cited another benefit to state flexibility: Reluctant states would be more willing to start exchanges because now they know they will have several options to meet the federal law’s requirements.

The National Federation of Independent Business, a critic of the law, said small businesses have an enormous stake in the viability of the exchanges. However, said Amanda Austin, director of federal policy for the group, “the devil’s in the details. You can talk the talk about flexibility, but that doesn’t mean the regs dictate it.”

So far, about a dozen states have adopted legislation creating exchanges. Some states, such as Florida, have refused to implement any part of the law.

Two states  Massachusetts and Utah  already have exchanges, although they represent two ends of the spectrum of how they can be run.

Massachusetts, for example, allows only those insurers who meet certain standards to participate; Utah’s accepts any insurers and sets few rules.  While the Obama administration says there is room for such wide flexibility in design, the proposed rule could pose a problem for Utah because it says existing exchanges are OK only if the state’s insured rate is at least the national average after the law is implemented.

Federal officials estimate the national coverage rate in 2016 will be between 93 and 95 percent. The latest data show Utah at 86 percent, while Massachusetts is at 95 percent.

“Today’s market is broken, especially for small business owners and individuals who buy their own policies,” said HHS Secretary Kathleen Sebelius, who unveiled the proposed rules during a press event at a hardware store in Washington, D.C. “These rules will help guide states as they create new competitive insurance marketplaces.”

Industry groups, consumer advocates and others have 75 days to weigh in with comments on the proposed rules. Final rules are expected later this year.

“HHS today released a menu, not a recipe,” US PIRG Policy Analyst Mike Russo said in a statement. “State leaders should take the flexibility they’ve been given to design a strong, negotiating exchange on behalf of consumers.”

“I would prefer to see them barred from the boards, but a number of states have already given insurers seats,” says Timothy Jost, a professor at Washington and Lee University School of Law.  “If they’re not barred, we need very strict rules to keep them from voting or participating in any issues that could financially affect their companies, which basically would be most issues.”

Although exchanges will officially open Jan. 1, 2014, consumers will be able to begin the process of signing up for coverage before then.  The law calls for “open enrollment” periods, similar to those currently set up by employers who offer health insurance.

Such enrollment periods are designed to encourage people to sign up for coverage right away, rather than waiting until they become ill.  That’s important because in 2014, not only does the law require nearly all Americans to carry coverage, it also requires insurers to take all applicants, even those with medical conditions.

To give people time to understand the exchanges and make their choices, the initial open enrollment period will begin Oct. 1, 2013 and run through Feb. 28, 2014.  In subsequent years, open enrollment will run from Oct. 15 to Dec. 7. People will be able to purchase insurance outside of open enrollment under specific circumstances, such as when adding a child by birth or adoption, or in cases where they lose employer coverage or coverage through a spouse.

“They have really given states about as much flexibility as they could legally do under the statute,” said Caroline Pearson, a senior manager at the Washington, D.C.-based health care consulting firm Avalere. “I was impressed by how few requirements there were.”

The initial enrollment and annual enrollment periods are similar to such periods for past programs, like the Medicare prescription drug benefit, she said.

Phil Galewitz of Kaiser Health News contributed to this article.