Alexandra Dixon threads her way among the people waiting to see a doctor at the Community Clinic, Inc. in Silver Spring, Maryland. She introduces herself with a bright smile and an outstretched hand: “I’m one of the new health care navigators. Have you heard of the Affordable Care Act?”

While some folks mumble, “um, no I don’t think so,” Dixon is nonetheless booked up with appointments. She’s one of 350 people in Maryland who have been hired and certified to help consumers enroll in the new health insurance options that are offered as part of the health law. 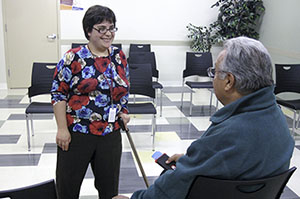 She says that a few frown at what they call “Obamacare,” but “for the most part, people have been really excited and really happy and know what this is, you know.”

Dixon sits down with Maria Hernandez, a construction worker who’s a legal immigrant and has been uninsured for the past five years. Hernandez says sometimes she gets sick, but without insurance, it’s better just to take some medicine and stay home. With Dixon’s help, she’s gotten an application started for insurance.

Despite Dixon’s enthusiasm and persistence, no one at the clinic where she works has actually enrolled in a new private insurance plan on the exchange. The Maryland exchange website freezes up at some point in the process almost every time. But whenever Dixon hits a road block, she just sets up an appointment for the patient to come back: “Because the portal is a lot better this week than it was last week. I have every expectation that next week it will be working better than this week,” she says.

And she has her state behind her—Maryland has embraced the health law.  It’s one of the 16 states plus the District of Columbia that are running their own exchanges. The rest are being run by the federal government, whose efforts have been stretched thin, according to Caroline Pearson of Avalere Health, a consulting company that’s been tracking exchanges.

“The states that are operating their own exchanges just have a lot more funding available to do outreach and enrollment. The federal government just had limited funding left to do that, and it was spread across a large number of states,” she notes.

The entire state of Ohio, for example, got just $3 million in grants to do consumer outreach. That’s compared to $24 million in Maryland, which has half as many uninsured residents.

That frustrates Lisa Hamler-Fugitt, who runs the Ohio Association of Foodbanks, the state’s main consumer outreach group for the exchange.  “We have too few boots on the ground,” she worries. “We need hundreds if not thousands of individuals to assist us.”

Instead, she’ll have about 40. Ohio has laws putting additional restrictions on navigators, including requiring them to go through a longer certification process with the insurance department. Hamler-Fugitt believes that’s stalled the process of getting her navigators on the ground by three weeks. These early differences between states could hamper the goal of the ACA, which is to get as many people insured as possible, according to Avalere’s Pearson.

“Recent polling show that only about 12 percent of the uninsured population, who could benefit from exchanges, understand that they are launching and began on October 1st. So doing a big push out in the community can potentially bring a lot of people into the market, that you’re not going to see in a state that isn’t as proactive,” she says.

But she adds, this is only the beginning of the enrollment process. And launching a program of this size is always a huge lift. Consumers have until the end of March to sign up for coverage in 2014. And as the kinks get worked out, it’s still possible that this year’s enrollment will be a success.