HURON, Calif. — Farm labor contractors across California — the nation’s biggest agricultural engine — are anxiously studying a provision of the Affordable Care Act, which will require hundreds of thousands of field workers to be covered by health insurance. 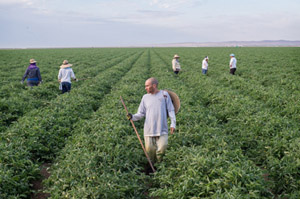 In the Central Valley of California, farm workers in a tomato field. Insurance brokers and health providers estimate that meeting the Affordable Care Act’s minimum health plan will cost about $1 per hour per employee in the field (Photo by Matt Black for New York Times/KHN).

And while the requirement to cover workers was recently delayed until 2015, the contractors, who provide farmers with armies of field workers, say they are already preparing for the potential cost, inconvenience, and liability the new law will bring to their business, which typically operates on a slender profit margin.

“I’ve been to at least a dozen seminars on the Affordable Care Act since February,” said Chuck Herrin, owner of Sunrise Farm Labor, a contractor based here. “If you don’t take the right approach, you’re wiped out.”

The effects of the new law could be profound. Insurance brokers and health providers familiar with California’s $43.5 billion agricultural industry estimate that meeting the law’s minimum health plan will cost about $1 per hour per employee worked in the field.

“Everybody is afraid of the cost,” said J. Edward McClements, Jr., a senior vice president at Barkley Insurance and Risk Management, based in Oxnard, about 60 miles west of Los Angeles. “It’s difficult when you’ve got 1,000 workers who’ve never had health insurance before, to get an idea of what their costs will be.”

The concern is felt from vineyards in Napa County to the almond orchards outside Coalinga, a Central Valley town best known for its state prison and mental hospital. Farm labor contractors generally rely on a 2 percent profit, and they say they will have to pass the added health care costs required by the new law on to growers. Mr. Herrin, who can employ up to 2,000 farmworkers — many of them long-time employees — has been warning his customers of the coming price increase due to health insurance costs.

“It’s made for some heated battles,” Mr. Herrin said, of his talks with growers who include his father-in-law, the owner of a Central Valley farm.

Some farmers seem resigned to higher labor costs, and to the fact that that increase will be passed on to the consumers of everything from leafy greens to crunchy nuts. “That cost is going to be borne by us at the end of the day,” said Scott Deardorff, a partner at Oxnard-based Deardorff Family Farms, which grows strawberries, cauliflower and chard, among other salad bar staples.

Across the country, employers in many other kinds of businesses are devising strategies to comply with or, in some cases, sidestep a new requirement to provide insurance for those who work 30 hours or more. Some are breaking their businesses into smaller companies, for instance, or even laying off workers. Some companies plan to shift workers to part-time status.

But in the vast, fertile fields of California’s Central Valley, farmers and the contractors who supply them with work crews must prune, pick and pack produce when it is ready, nearly year round. Ripe cantaloupe will not wait.

“You can’t put your ag workers on a 28-hour work week like Starbucks, Denny’s and Wal-Mart are considering,” said Mr. McClements.

California farmers produce half of all fruits, nuts and vegetables grown in the nation, according to the California Department of Food and Agriculture. But Guadalupe Sandoval, executive director of the California Farm Labor Contractor Association, said the state’s farmers must compete for supermarket shelf space against agricultural producers worldwide, most of whom are not paying for worker health care.

“What does this do when I want to sell a product to Wal-Mart or Costco?” Mr. Sandoval said growers have asked him.

In places like Huron, meanwhile, a Central Valley town surrounded by thousands of acres of farmland, there are other, practical concerns. On a recent morning, Jose Romero pulled weeds from a row of lush, redolent tomato plants. Mr. Romero, 36, arrived at the field around 5 a.m., and worked until sunset. He has been working in the fields, Mr. Romero says, for nearly two decades.

Like many of the workers in this tomato field, he was surprised to learn that his employer, Chuck Herrin at Sunrise Farm Labor, will have to offer him health coverage, and that he could be asked to contribute up to 9.5 percent of his wages to cover the costs. “We eat, we pay rent and no more,” Mr. Romero said in Spanish. “The salary that they give you here, to pay insurance for the family, it wouldn’t be enough.”

There seems to be widespread agreement among agricultural employers, insurance brokers and health plans in California that low-wage farmworkers cannot be asked to pay health insurance premiums. “He’s making $8 to $9 an hour, and you’re asking him to pay for something that’s he’s not going to use?” Mr. Herrin asked.

The minimum compliant health plan for employee coverage under the new law will cost about $250 a month in California’s growing regions, according to insurance brokers, and includes a $5,000 deductible for medical care, although insurers cannot charge co-pays for preventive visits. “It’s unacceptable,” Mr. Herrin added.

The situation is complicated by the reality that many farmworkers apply for jobs with questionable identification, and that farmers and farm labor contractors hire them anyway. (Employers say they must accept documents that look legitimate and can be penalized for directly asking if a potential employee is in the country illegally.)

Employers are trying to spread the word, a tricky process in places where the mere mention of government oversight can stir fear. Oscar Renteria, owner of Renteria Vineyard Management, a farm labor contractor based in Napa, has held meetings in Spanish to explain the health law to his 380 employees, some of whom may be in the country illegally.

“They’re really nervous,” Mr. Renteria said. “Nervous they’ll be tracked and then somehow the possibility of being identified, and the fear of being deported or not being allowed to work. It comes up all the time in conversations when we outline the choices.”

Even agricultural employers that already offer health coverage are bracing for major changes. One preferred option were so-called “mini-meds,” bare-bones plans with coverage limits as low as $5,000. But those are now banned under the federal health law, and while the Obama administration decision gives larger employers another year to comply, even that reprieve doesn’t offer much time for California farmers to figure out an alternative.

Uncertainty is a constant on the farm: crops fail, prices fall, plows go dull. Indeed, in Huron, where farmers have complained bitterly about water shortages, there is a force more powerful than the health law and more vexing than the stalled immigration overhaul: the weather.

“If we don’t get a lot of snow and rain this year, none of this will matter,” Mr. Herrin said. “We’ll be out of business.”