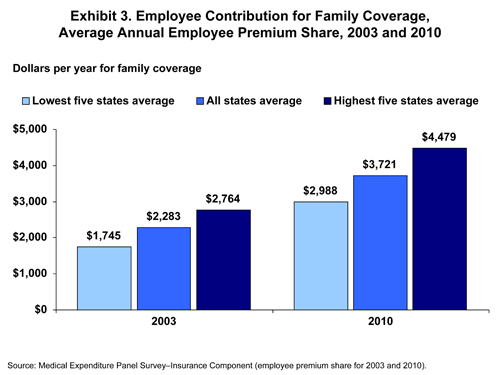 Chart by The Commonwealth Fund

Another day, another piece of bad news about health insurance premiums.

A state-by-state analysis finds that from 2003 to 2010, premiums for family coverage increased an average of 50 percent. At that rate, the average family premium would balloon to nearly $24,000 by 2020, according to the study, which was conducted by The Commonwealth Fund, a nonprofit health policy foundation.

At the same time, the annual cost to employees increased by 63 percent, as businesses required workers to pick up a greater share of health insurance costs.  Per-person deductibles increased an average of 98 percent.

Mississippians fared the worst, with family premiums increasing 70 percent. People in Idaho felt the least pain, on average, with only a 33 percent increase in the same time period.  In all states, insurance premiums rose faster than incomes.

“Whether you live in California, Montana, or West Virginia, health insurance is expensive” said Commonwealth Fund Senior Vice President Cathy Schoen, lead author of the report, according to the press release.

Commonwealth created a cool interactive map of the country if you want to see the results from your state.

The study analyzed private sector health insurance premiums and deductibles for people under 65, which came from the federal government’s annual survey of employers for the Medical Expenditure Panel Survey.

In September, The Kaiser Family Foundation’s annual survey of thousands of employers found that the average annual premium for employer-sponsored family coverage in 2011 was $15,703. (Kaiser Health News is an editorially-independent program of the foundation).