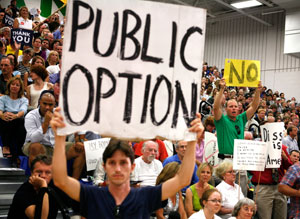 For all the controversy over a government-run insurance option, the program outlined in health overhaul legislation likely would play a minuscule role in efforts to expand health care coverage, according to many health care experts and lawmakers.

Of the 30 million Americans likely to purchase insurance through exchanges created by the legislation, only six million — or one fifth — would enroll in a public insurance plan, according to a Congressional Budget Office analysis of the House bill. Viewing it another way, the six million using the public option would amount to only two percent of the 282 million Americans under the age of 65 who are projected to have health insurance by 2019, when the legislation is fully implemented.

And that number could shrink because states may decide to opt out of a public insurance plan, an escape clause that’s likely to be included in the Senate plan.

“The politics of this issue is totally disproportionate to its likely impact one way or another,” said Bruce Vladeck, a former administrator of the federal agency now called the Centers for Medicare and Medicaid Services.

Senate Majority Leader Harry Reid, D-Nev., has said the Senate overhaul bill would allow states to opt out of the public plan  a step political experts say at least some would likely take. Congressional Republicans are united in opposition to a government-backed insurance plan, and political leaders in heavily GOP states may also be opposed. Insurers, which fiercely oppose a public plan, would also be expected to lobby against it.

No matter what the states do, the government-run plan is not likely to attract a large membership, at least according to the CBO. The CBO reasoned that the plan may not be able to offer a price advantage  in part because the House bill requires a government-backed insurer to negotiate payment rates rather than dictate them to hospitals and doctors.

If the number of people in the public plan turns out to be six million in 2019, that would work out to an average of 120,000 per state. But that number probably would be smaller in the smallest states, perhaps totaling just tens of thousands.

Reid would allow states to opt out of the program by 2014, one year after the public plan would take effect. He hasn’t provided details on how such an opt out would work, or how the governors and the state legislatures might decide. Some advocates of the public plan fear that the states could end up with too much power to withdraw from a public plan, leaving residents with fewer health insurance choices.

“A lot will depend on the specific rules, and there’s a risk that the legislation would make it so easy for states to waive participation in the plan that it defeats the whole purpose of having a national health insurance entity,” said Jacob Hacker, a Yale University professor of political science who favors the public insurance program and an opt-out approach.

Others say, however, that the opt-out clause will rightfully allow states to decide what’s best for their residents.

Predicting the states’ responses is tricky, even where Republicans and conservative Democrats predominate. Some say the consumer appeal of a public plan could trump criticism that government plans would eventually drive out competition and lead to the federalization of health care.

Congressional Democrats say a government plan would spark competition with private insurers in the exchanges, or marketplaces, where under the legislation millions of Americans who don’t have employer-provided coverage would shop for policies. Advocates say that could especially help consumers in states, often smaller, more rural ones, where only one or two insurers dominate the market, and are typically lightly regulated.

Whether states would opt out of the public option would depend on several factors, including the political makeup of the state, the level of competition among insurers and whether insurance companies push state officials to keep out a government-backed plan.

“If insurance companies don’t want any public plans to compete with them, they will be pressing the governors and the legislatures to opt out,” said Rep. Henry Waxman, D-Calif., chairman of the Energy and Commerce Committee and one of the architects of the House Democratic bill. That legislation doesn’t include an opt-out provision.

In many states, the decision would hinge on whether people view the public option as a useful way to increase competition or heavy-handed government interference in the marketplace.

In Oklahoma, Insurance Commissioner Kim Holland said in an interview that, given the state’s conservative political makeup, it’s likely “that as long as there is a sense that citizens have options and affordable options …[the legislature] won’t jump into participating in a public plan.”

But some congressional Republicans argued that it would be difficult for GOP-controlled states to reject a public option-thus barring their residents from a program that would be open to millions of Americans in other states.

“What you’d be saying to your people back home [is] `We’re going to take our state out of this but, by the way, you’re going to be paying increased taxes'” as part of a health overhaul, said Sen. Mike Johanns, a Nebraska Republican who was governor of the state from 1999 to 2005. “I think the people would look at that and think that’s the most foolish thing I’ve ever heard…It’s a false option.”

The opt-out provision touted by Reid is stirring debate in governors’ races that will be decided Tuesday. In New Jersey, Democratic Gov. Jon Corzine, who is running for reelection, said he would not opt out of a public option while his Republican challenger, Chris Christie, said that he would. In the Virginia governor’s race, Republican Bob McDonnell said he would opt out; Democrat Creigh Deeds has not said for certain what he would do.

The opt-out provision, if enacted, could also figure in scores of state legislative and gubernatorial races next year.

The issue could be especially contentious in Alabama where, according to the Government Accountability Office, Blue Cross and Blue Shield controls 96 percent of policies sold in the small-group health insurance market. Consumer advocates say the public plan is needed in their state to spur competition.

Rep. Artur Davis, an Alabama Democrat who is running for governor, said that while he is not an advocate of a public plan, he’d want it to be an option for his state’s residents. “For me, the public option is not the focus of this debate,” he said in an interview. “Having said that . . . if the federal legislation passes, it’s your task as governor to enforce that legislation.”

A spokesman for incumbent Republican Gov. Bob Riley said it would be “premature” to speculate on whether Riley would favor opting out of a public plan.

Even with strong Democratic majorities in the Alabama legislature, there might be pressure to shun a government-run plan. “I think Alabama is one of those states where they believe in self-sufficiency, they believe in trying to have less government intervention in their day-to-day lives, and right now the public option as proposed is contrary to that,” said Rep. Bobby Bright, D-Ala.

New York lawmakers and health policy analysts predicted their state would embrace a public plan to increase the number of health insurance choices. “My guess is in New York the public option is very popular so it would probably stay in,” said Democratic Sen. Charles Schumer.

“It might make sense to combine the new public option with existing programs” to get more leverage in negotiating rates with doctors and hospitals, he said.