LOS ANGELES — Drawn by the promise of free health care, residents from throughout Southern California flocked to the L.A. Sports Arena beginning Thursday to get their cavities filled, blood pressure checked and eyes tested. 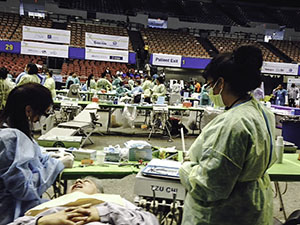 The Care Harbor L.A. event, in its fifth year, expects to treat about 3,750 people over four days. But this year is different because many of those in attendance will be eligible for insurance through the federal health law, said Howard Kahn, chief executive officer of L.A. Care Health Plan.

“We can give care today and get coverage for the same folks tomorrow,” said Kahn, whose organization is one of the main sponsors.

Earlier this week, uninsured residents waited for hours to receive wristbands that would allow them to attend the makeshift medical clinic for a chance to see doctors, dentists, optometrists and other specialists. Unable to pay for insurance, clinic patients have tolerated toothaches or blurry vision for years and relied on emergency rooms for routine medical care.

In one section of the arena, people could enroll in Healthy Way L.A., a health coverage program for low-income county residents who will be eligible for expanded Medi-Cal coverage, the state’s Medicaid program.  Nearby, they could sign up for insurance through the state’s marketplace, Covered California. Patients could also make appointments at area clinics for follow-up treatment for diabetes, high blood pressure, swollen legs and other ailments.

Trevor Bradley, 27, saw an acupuncturist for neck pain and was waiting to have a tooth pulled. He walked up to one of the enrollment tables, told them he was unemployed and uninsured and that he needed coverage.

A counselor told him he may be eligible for free or discounted coverage and gave him a packet of information to read through and a phone number to call. “I’m hoping I can get something,” he said, adding that he hadn’t been insured for a “long, long time.”

Mekyella Marquez, 38, who came to the clinic for vision screening and a mammogram, said she applied for Medi-Cal but didn’t qualify for free insurance. She hasn’t checked to see what her premiums would be for private insurance through the marketplace, saying that she feared computer problems and long wait times.

Marquez used to be a medical biller before getting laid off, and said she is using her retirement savings to pay for care for herself and her autistic daughter. Marquez said she wants health insurance but is worried about the cost of premiums. “If you don’t have a job, how are you going to pay for health insurance?” she said.

Others had similar concerns. Jackie Smith, 43, said she is unemployed and that she barely can support herself and her three children. Smith said she received some information about the law on Monday when she got a wristband to attend the clinic. But she thought she might have to pay hundreds of dollars each month for premiums.