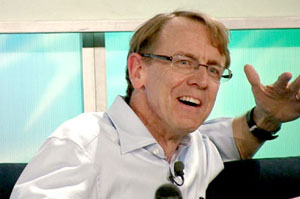 Venture capitalist John Doerr invested in a laboratory to develop software and services to help doctors and insurers tackle costs. (Photo by JD Lasica via Flickr)

America’s health care spending is “twice what it was ten years ago, and it’s forecasted to grow in an unaffordable way for the country,” said John Doerr, the Kleiner Perkins Caufield & Byers partner who backed Google, Twitter and other technology giants. Doerr’s answer to the health care problem is Essence Group Holding Corp., a St. Louis health plan he bought in 2007 and converted into a laboratory to develop software and services to help doctors and insurers tackle costs.

Doerr isn’t alone in spotting an opportunity in health care’s high costs. Venture capitalists are increasingly interested in nuts-and-bolts businesses like data mining and grassroots care management. Meanwhile, the appeal of companies that seek high-ticket, high-risk medical breakthroughs is on the wane.

The share of venture dollars flowing to seed and early stage investments in biotechnology and medical devices has plummeted since 2007, when investors pumped $3.6 billion into 332 deals in which a price was disclosed, according to data compiled for Kaiser Health News by FactSet Research Systems. As of late October, investors had spent $1.1 billion on only 89 such deals this year. Overall venture investing declined by nearly one-third as the economic recession set in, but is on track this year to return to nearly pre-recession levels.

“There’s a realization that part of the health care cost problem is adding on the bells and whistles of [medical] technology,” said Ian Morrison, a health care consultant based in Menlo Park, Calif.  “The smart money is recognizing that’s not the winning formula for the future.”

Some of that money is increasingly going to information technology, business services and other health-focused companies. For instance, software companies that cater to the health care industry saw $407 million in investments in the first three quarters of this year, compared with $311 million for the full year in 2007 before the recession, according to PricewaterhouseCoopers researchers, who compile the industry-backed quarterly MoneyTree Report. Though the increase so far remains modest – not yet approaching the e-health boom in 2000 – investors say interest in the sector is heating up.

Venture capitalists are still looking for strong companies in all sectors – drugs, devices, and services – but, cost concerns and other factors have led to changes in demand. Investors are wagering customers will pay attention to the promise of lower costs.

“If you come in with [a device] that’s 10 percent better and twice as expensive, it’s hard to get anyone to care,” said Bryan Roberts, a Palo Alto, Calif.-based venture capitalist at Venrock who invests both in health services and device and drug makers.

Doerr’s firm, Kleiner Perkins, and Camden Partners, put $61 million into Essence this summer in a bid to help market the technologies it has developed to rival health plans. Sandbox Industries followed with a $9 million investment late last month.

Investors are generally wary of businesses that depend on government action, such as electronic medical records that were subsidized in the 2009 stimulus law. But the 2010 health overhaul law has accelerated demand for companies that use data to make health care more efficient, provide online services to help consumers shop for care and help the insurance industry adjust to new regulations.

“The changes in the health system are rocket fuel for entrepreneurs,” said Bob Kocher, a former Obama health policy advisor who was hired by Venrock in part to capitalize on the expertise he cultivated working on the law in the White House.

Kocher is eyeing businesses that do things like help hospitals keep patients from coming back soon after treatment, a big-ticket cost for years that the health law will now tie to new penalties. Like other investors, he also anticipates that many people who gain coverage under the law will face high insurance deductibles. So, Venrock and other firms have funded Castlight Health, a technology company that helps patients choose the cheapest care.

Whether such investment continues – and pays off – depends in part on Washington. Legal and political challenges to the law lie ahead in 2012 with the Supreme Court likely to weigh in and voters deciding on the next president and Congress.

Though Brailer is skeptical, he still expects broad change, describing his firm as “the health care version of a green investor,” betting that cost pressure will fell titans of the industry as new upstarts – such as a hospice company and a radiology outsourcing group Brailer financed– promise lower cost.

Brailer and most investors interviewed for this story envision two futures: One in which the health law remains intact and providers and insurers face ever lower payments and increasing pressure to reduce costs, and another in which it is repealed and costs continue to balloon. Either way, health companies need to be rescued from out-of-control costs. “They’re all looking for life boats,” Brailer said.

Meanwhile, in the device sector, the combined forces of cost pressure, a stricter Food and Drug Administration and an economic recession have made it more difficult to raise capital or sell companies and that has discouraged private investment, said Rob Kuhling, a partner at Onset Ventures in Menlo Park.

In response, device investors are prowling for products they can market as savers. Kuhling and others have backed companies that seek to bring a new heart valve to the United States. Medicare now pays $66,000 for open heart surgery to replace failing valves at Stanford Medical Center, in Silicon Valley. The new valve could be inserted through an artery without open surgery. Though the product itself is more expensive than typical replacement valves, it could potentially reduce hospital stays and become a lower-cost option—about $45,000 in total—for some patients, Kuhling estimated.

The valve Kuhling backed is pending approval at the FDA. Another version, Edwards Lifesciences’s Sapien valve, gained FDA approval Wednesday, for patients who are too ill to undergo open heart surgery.

Investing In Meals On Wheels

Biotechnology faces its own set of problems. The industry “is cognizant of the fact that the health system is moving towards a more cost-conscious system,” said Michael Yee, an RBC Capital Markets analyst. But, he believes the market could rebound and that the industry is facing largely short-term problems. The health law introduces new fees on drug makers, for instance, but also promises millions of new customers as more people eventually gain insurance coverage. “A lot of this is near-term fear,” Yee said.

The same fear – of a health system with fewer resources – is, however, propelling the new wave of companies sought out by private investors. It’s hard to imagine a venture firm betting on the “largest meals-on-wheels operator” in Texas, but that’s what’s happening for Independent Living Systems.

In the next couple of weeks, the company led by chief executive Nestor Plana expects to finalize a cash infusion from Oak Investment Partners. The company operates a range of long-term care management services in several states, including outsourcing for health plans that serve low-income seniors, care management, and the nutritional services Plana boasts about. Neither Plana nor Ann Lamont, an Oak venture capitalist, disclosed the amount of the investment.

With the added funds, Plana will try to cash in on states’ needs to rein in long-term care costs, which consume nearly half of some states’ health care budgets. Meanwhile, the health law showers companies in the business of managing health for poor seniors with new business opportunities, greasing the wheels to expand managed-care to these patients and funneling money to states seeking to experiment with more efficient ways to care for them.

“This is the time to get into that space, and ride that wave,” said Plana, who added that this was his company’s first venture investment. He predicted the move would help turn Independent Living Systems into a national name.

Younger entrepreneurs and would-be investors are starting to rethink healthcare, too. Bob Higgins, the founder of Highland Capital Partners, teaches a class on health care entrepreneurship at Harvard Business School.  “My sharpest students are all trying to go to places like ZocDoc and Castlight,” both venture-backed online start-ups that help patients shop for care, Higgins said.

A few years ago the “classic” prospective employer for his students was an emerging biotech firm, Higgins said. But few of those companies are now hiring.