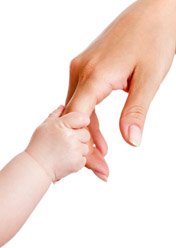 Maternal depression can make it more difficult for women to breastfeed, keep up with doctors’ appointments and interact with their babies. But some health care researchers are hoping the Affordable Care Act will improve treatment for a condition that affects 11 percent of infants’ mothers on average, but which is more prevalent among low-income mothers.

“Low-income mothers were more likely to have severe depression,” said Marla McDaniel, a senior research associate at the Urban Institute, author of a draft research paper based on national estimates from the National Survey of Drug Use and Health that compared the health of low-income mothers with that of all mothers. Her comments came as part of a panel Thursday on depression and maternal health at the Urban Institute, a Washington D.C.  research group.

Eighty two percent of infants living in poverty in households with depressed mothers were enrolled in Medicaid or CHIP programs, health care programs for low-income people, according to a separate 2010 report by the Urban Institute about children affected by maternal depression. Of the mothers, at least 40 percent were not receiving any treatment. Outcomes were consistently worse for uninsured families.

But states choosing to participate in the expansion of Medicaid could improve access to the prevention and treatment women need, said Larke Huang, a psychologist and senior adviser at the federal Substance Abuse and Mental Health Services Administration, who was also part of the forum. Medicaid currently covers pregnant women considered “medically needy,”who might not meet income requirements. The coverage continues  until six months after they give birth. In states that expand the program, many of those women will now qualify for the program after the six-month period, she said.

Huang said the Obama administration was also calling for higher quality of treatment and services. She said having providers and community workers incorporate changes like electronic health records or more careful screening could impact how efficiently the care was delivered.

Regardless of coverage, Huang said connecting proven clinical interventions to other community and welfare programs is an important part of screening and treating maternal depression. She suggested that linking clinical screening to programs such as the Women, Infants and Children Program (WIC) , which provides federal funding for nutritional programs for mothers and children, and Head Start, which provides educational support for low-income children, was the best way to reach lower income women.

Deborah Perry, a Georgetown professor, said providing mental health care to the poor communities was further complicated by the social stigma and misinformation surrounding the diagnosis of depression. Through her work with community health organizations, she observed that many of the families didn’t consider the disease worthy of clinical treatment.

“Depression is like a chronic medical condition,” she said. “But that’s not how they saw it – they saw it as a natural reaction to their crummy life circumstances.”